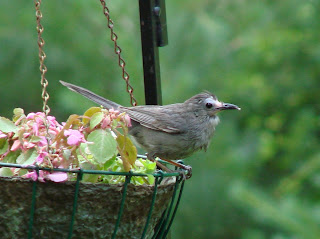 During the last week, I have found it impossible to sit on my back porch and read. Oh, I try. But there is such a riot of activity that I can’t even open the book.

Many neighborhood birds are bringing their nesting season to a conclusion, (though some may nest for a second or third time). The young are gathering at my feeders, sometimes following a parent. Or when the parents have gotten tired of feeding them, the young return to my feeders on their own. It seems that every bird amenable to bird feeders has brought their young around to enjoy my largess. The results are wild and raucous.

I’ve never had so many grackles. They’ve been breeding with such proficiency that the plain brown-black young form flocks, following iridescent adults here and there, their route of passage crossing and crisscrossing my yard with pauses in the apple tree, quick forays for ground seed, then off to the pines across the river.

The grackles are noisy, but they are nothing compared to the Blue Jays. The Blue Jays go nowhere without screaming about it. The young have been fluttering their wings in the apple tree, demanding to be fed, and their parents are accommodating ... up to a point. Once the point has been reached, the begging youngsters are disciplined and chased, and gradually get the idea that the free meals have ended. It is time to do for themselves. 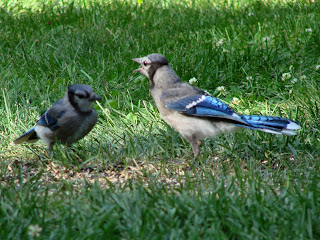 Many young birds look almost identical to their parents when they leave the nest and begin traveling on their own. A clue to their young age is their cluelessness. I watched a young Blue Jay picking seeds on the ground. It was getting plenty to eat. The older jays shovel copious amounts of seed from the feeder as they seek the one seed suitable to their palate. The shoveled seeds supply the many ground feeders, including the chipmunks and squirrels. (My feelings about chipmunks whose cheek pouches bulge with my seed are ambiguous at best.)

The young jay was getting plenty to eat. But it clearly had little clue about any dangers or risks. It was still dealing with the unwelcome reality that mom and dad were no longer going to feed him and he had to feed himself. 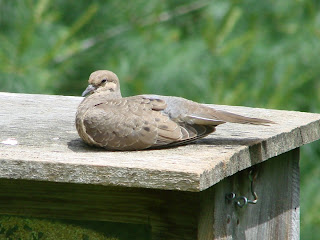 On the cluelessness scale, the young Mourning Doves rank the highest. Sometimes the young doves have a scaliness to their plumage lacking in the adults, but that disappears after a short time. It is cluelessness that gives away their young age. Mourning Doves begin nesting very early in the Spring; they lay two eggs, and once that small brood has been raised, they do it again ... and again ... three or four broods a year. This means that there can be many naive youngsters hanging around. Doves are generally quiet and gentle birds, but the young exhibit these traits to an extreme. I can easily approach the feeder where they like to rest - sometimes as close as three or four feet before the youngsters finally, and reluctantly, take flight. They have no idea that two legged creatures are the most dangerous creatures in the world. For that matter, they have no idea that their gentle passivity makes them favorite prey for a Sharp-shinned or Cooper’s Hawk, also birds which are attracted to the convenience of backyard feeders.

Smaller birds are often more difficult to age. Young chickadees, titmice, nuthatches, finches, and many sparrows quickly lose their downiness and look like their parents within a few days of leaving the nest. But the chickadee on the branch over my head that impatiently flutters its wings, or the finch in the dogwood crouched and chittering with open beak is a young bird wanting to be fed, and in moments a harried parent will accommodate its demand ... for the moment. 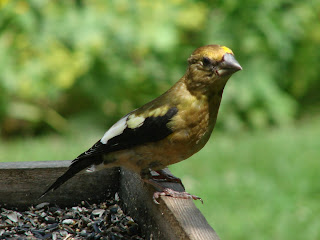 Five Evening Grosbeaks on the platform feeder one morning included three juveniles. They weren’t begging, and their plumage was very similar to the adult females, but there was a hesitancy about their feeding which gave away their youthfulness.

An aside about bird feeders. My feeders were trashed in early June by a young bear. He came back a day later, nosing around the composter. My spouse, using her authoritative, disciplinary tone honed by many years in the classroom, admonished his misbehavior, clapped her hands and chased him off. He has not returned, and we have replaced our feeders. But to remove temptation, we bring them at night. The birds have readily adjusted, although it sometimes seems that the jays are especially noisy on those rare mornings when we sleep past 6:30.

For sheer entertainment, the woodpeckers have led the way this year. It’s been a banner year. I usually have two pair of Downy Woodpeckers and a pair of Hairy Woodpeckers which visit my suet feeder throughout the year. This summer (I am guessing) that number has doubled. It is hard to know for sure, but there have been so many young woodpeckers being fed by adults for so long (at least two weeks now, maybe three) that there must be a succession of families.

I become mesmerized watching a parent clamber over the suet cage, sometimes clinging upside down to the side or the bottom. The youngster also watches intently, creeping after the parent, squawking when it seems to be taking too long. Both are so intent on their tasks - feeding and being fed - that I can slowly approach, almost within touching distance, before they fly. 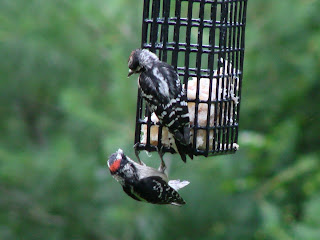 Then there is the adult picking out suet pieces who is approached by a young bird. Impatiently he chases off the youngster. Was the youngster someone else’s, hoping for a handout from any adult? Or was it still begging from a parent who had done enough and knew it was time for its offspring to fend for itself?

Young male Hairy and Downy Woodpeckers have a red cap (sometimes yellow on the Hairy) instead of red on the back of the head. So, it is possible to identify the juveniles after they have been weaned from their parents. I had a juvenile Hairy and a juvenile Downy hanging on opposite sides of the suet feeder, busily pecking away, while three more juveniles waited on the post and hanging basket for their turn. All flew off when Dad Downy flew in, followed by a juvenile female making her “ki, ki, ki, ki” begging calls. Then came mother Hairy with a fledgling in tow. She flew and he followed, and Dad Downy returned.

And so it continues through late afternoon and evening. There’s hardly any time to make dinner - just grab a quick leftover - because a young jay just made a last hopeful wing flutter before picking up seeds. Now the grackles are back. There’s a young catbird at the suet. Here comes the Hairy. There must be four Downies moving through the branches. Is it any wonder that I can’t read on the back porch with all this going on?

Evening Grossbeaks nesting? That ranks high on my envy meter. Unfortunately for me Evening Grossbeaks are but a memory when they use to invade my feeders growing up in Massachusetts. Living here in Pennsylvania I haven't seen one in many years, and with their steept decline in recent years I sometimes wonder if I ever will. Thanks for the pictures. I also looked up your June 9th post.
Vern