The Herring Gull - the Typical Gull 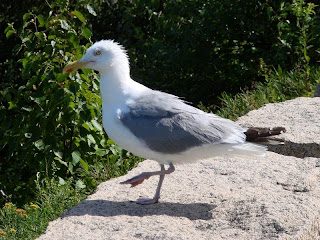 I love the New England coast, and in recent weeks I have had several occasions to wander sections of this coast, explore some of the inlets, and just watch as the tides breaks on the rugged rocks and cliffs. During most of this wandering, I was not deliberately looking for birds, with the result that I noticed some birds more than I otherwise might have.

Specifically, I noticed the Herring Gull, which is bound to make some birders may gag. The Herring Gull is so common. It is often a pest; it is noisy and pushy. It preys on the eggs and young of “good” birds. It eats garbage. It poops prodigiously on docks, sidewalks, signs, and any other object on which it may alight on or fly over. The Herring Gull is there - always - and need not be noted or paused over as the birder pursues the next bird sighting.

Yes, the Herring Gull is there, and that’s what I noticed. I saw it on a stone guard rail at a scenic parking spot, unconcerned about my car intruding on its space, its feathers ruffled only by the ocean breeze. I saw it hopping amount the tables of an outdoor restaurant in the early evening; the diners were gone and the waitstaff was cleaning up. So was the Herring Gull, looking for bits of food strewn on the grass. I saw the Herring Gull perched on a car top on a coastal mountain top.

Thirty miles from shore, in the open ocean, I saw a Herring Gull flying steadily and purposefully eastward toward the deeper waters of the Atlantic, and another flying in from those distant waters. And another, resting on the waters among the pelagic shearwaters which only come ashore to breed.

I watched a Herring Gull hover over a roadway with something in its beak, then drop that something onto the hard pavement - a mollusk of some type. It repeated the exercise, each time from a greater height, until the protective shell finally cracked and yielded its contents to the resourceful, and hungry, gull.

I saw a Herring Gull sleeping peacefully on a sunny rock, and a dozen of varying ages socializing on a sandbar, and several dozen following a lobster boat for whatever offal might be thrown on the waters, and another wading in the thick seaweed and mud just exposed by the ebbing tide, its feet sucked in by the semi-liquid ocean floor just as were those of the human hunter for crabs nearby.

I saw the Herring Gull everywhere along and near the coast. It is a proto-typical gull - the gull that is used as the model with which to compare and contrast other gulls. Other gulls are bigger than, smaller than, slimmer than, stockier than, lighter than, darker than, whiter than, more graceful than ... the Herring Gull.

The Herring Gull is a large gull, with pink legs, yellow bill, and a bright red spot on its lower mandible. It has a white head. It is white underneath and gray on the back. The primary wing feathers are black on the ends with white spots. While typical of gulls, it is not the most handsome of gulls; Dunne in his Essential Field Guide Companion calls it “gangly and angular” and concludes that “if any gull deserves to be called ugly, this one is it.”

The Herring Gull’s scientific name is Larus argentatus. Larus is from Latin for gull; argentatus means silvery, or plated with silver, hence one of its folk names - “Silver Gull.” It is also known as the “Harbor Gull,” for its prevalence in and around harbors, and the “Winter Gull” for the fact that it often appears in the winter. In southeastern Vermont and the Connecticut River valley it is one of our three “winter gulls,” joining company with the smaller Ring-billed Gull and the larger Greater Black-backed Gull. (Other rarer gulls can sometimes be found in the Connecticut River valley during winter, but these are the three most common.)

Along the New England coast, the Herring Gull is found year-round. Its breeding range generally begins on the off-shore islands and extends northward to the Arctic. In winter it vacates the far north, wintering from Newfoundland southward along the Atlantic and Gulf coasts, and sometimes to Mexico and the West Indies. It takes three to four years for a Herring Gull to mature and begin breeding; young birds may stay on the wintering range throughout the year and may wander much further than adults.

Herring Gulls are today the most common gull in the east. Commonalty often leads to disinterest and even contempt. But a hundred years ago, the bird was in danger. Their numbers had been drastically reduced by eggers, and the feather trade.

Audubon described a visit in 1833 to White Head Island at the entrance to the Bay of Fundy. He was surprised to find Herring Gulls nesting in trees. The island’s owner explained that his sons and fishermen collected most of the eggs for use in winter. The gulls gradually began to put their nests in trees in the thickest island woods. Only the younger gulls were still nesting on the ground. The depredation to the gulls was so great, that the owner prohibited strangers from robbing the nests and only permitted select persons, such as Audubon and his party, to shoot the gulls. “I daresay,” quoted Audubon, “you will not commit any greater havoc among them than is necessary, and to that you are welcome.”

But this island owner was an exception in his restrictions. Gathering eggs for food, and killing the birds for the hat-feather trade (Herring Gulls and many other species), was so great during the nineteenth century that numbers were drastically reduced, endangering the survival of some species, and beginning to push the Herring Gull to that point. Fortunately, in the early twentieth century protections were instituted and the gull populations began to recover. 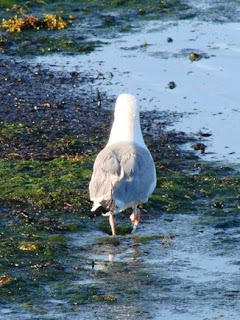 Herring Gulls recovery has been helped by its adaptability. They will eat anything. When natural food sources have been depleted, they have turned, instead, to offal, garbage and sewage. Forbush described their food adaptations: “It gathers in flocks in harbors and wherever fish are dressed or thrown away, at canning factories, fish-freezers or fish-wharves, and quickly devours all offal or fish-waste thrown into the water. It flocks in thousands where sewage is discharged .... Wherever fish, killed in thousands by disease, frost or other causes, are cast up in countless multitudes upon the shore to poison the air with the offensive effluvia of decay, there the gulls gather and in an astonishingly short time succeed in abating the nuisance.”

Landfills and garbage dumps are favorite gathering places for gulls where, in spite of their best efforts, they are unable to devour the tons of human generated garbage. Polite society does not like to be reminded of its garbage and filth, and looks down on those who clean up after the waste. Herring Gulls are enthusiastic omnivores and indiscriminate garbage lovers, thus reaping prejudice by the garbage producers.

On the New England coast, and in winter on many inland waters, Herring Gulls are everywhere. When I am not too busy, I notice them. Good birding!

Email ThisBlogThis!Share to TwitterShare to FacebookShare to Pinterest
Posted by Chris Petrak at 7:37 AM
Labels: Herring Gull