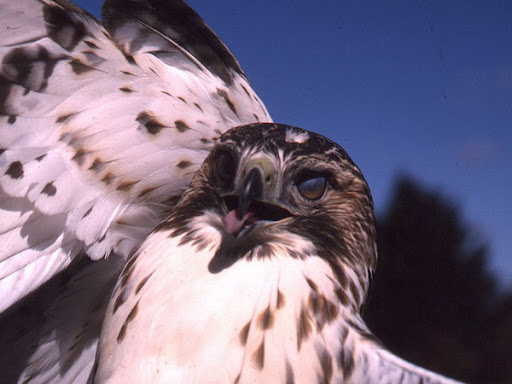 A number of years ago, a local naturalist, and licensed hawk bander, set up a small hawk banding station near a private residence along the Putney ridge. Several times I sat with him in the crude wooden blind which hid us from the eyes of passing hawks. The blind did nothing to stave off the cold fall air, and little to break the wind which made it feel even colder. The tiny shed was also the hawk bander’s office, with strings of numbered bands, pliers to pinch them around a leg, rulers and scales to measure and weigh, and clip boards to record data.

In the open area in front of the blind, spring nets and mist nets were set strategically around the lure birds, a harnassed English Sparrow, and Rock Pigeon. (As a note, lure birds are restricted to the two mentioned, and the European Starling, all invasive exotics species. They are changed often during the day, and rarely injured.) Lines from the lure birds led back to the blind so that the bander could keep them moving and draw the attention of a passing hawk.

One late morning on a cool October day, I sat in the blind with the bander. We scanned the sky with our binoculars. “Hawk,” I heard next to me. I picked up the bird, a distant pepper speck through my binoculars, at the far edge of magnified visibility. For the experienced eyes next to me, it was enough for him to say, “Red-tail.” 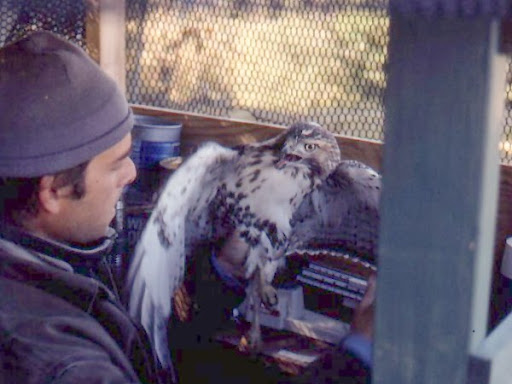 The Red-tailed Hawk is a sizable bird, weighing over two pounds and with a four foot wing-span. Among the hawks we are most likely to see in southeastern Vermont, only the Bald Eagle and Osprey are larger. Researchers have estimated that a Red-tailed Hawk can be seen with binoculars at a distance of about one and a half miles.

The Red-tail we were on was flying southwest, using the updraft along the Putney Ridge for lift and to propel it with a minimum expense of energy. As we followed the hawk with binoculars, the lure pigeon was stirred into movement. It fluttered up from the ground, then settled again.

It was enough movement. From the distance of over one mile, the Red-tail saw the movement. The hawk mind said injured bird, easy meal. The flight course altered, and the hawk came in, straight and fast. It hit the pigeon, then was entangled in the spring net. Quickly we retrieved the bird and went through the banding procedure.

Some ten years ago, and I still remember how that distant hawk saw a small movement, changed course, and came directly and rapidly in on that pigeon.

Hawk eyes. Vision we can’t even imagine. Attuned and aware of movement to a degree that, if humans ever had it, we have long since lost it. 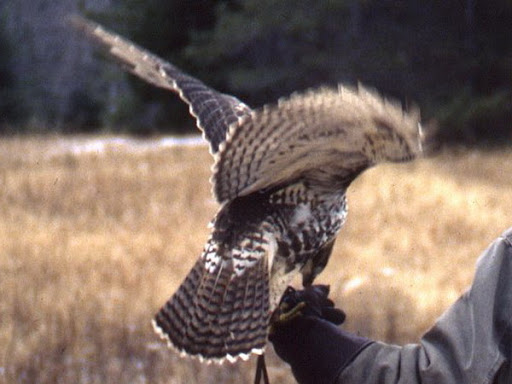 My naturalist and hawk banding friend was also a falconer. His falconry bird was a Red-tailed Hawk. One cold day in early December, I went out with him when he flew his hawk. The usual procedure was to release the hawk, then twirl meat on a line so that the hawk would come to his gloved hand for the food.

The hawk perched on a power line, and we began walking toward the middle of the grassy, partially snow-covered, field, putting some distance between us and the hawk. But the hawk was impatience and suddenly flew quickly to the ground near us. We went to where the Red-tail was standing on the thick, matted grass. My friend scraped through the tangled mat, and found that the hawk was holding a field mouse immobile under the grass.

Hawk eyes. From several tens of yards distance, the hawk detected movement beneath the grass and pounced.

The mid-flight shift which I observed at the banding station was an exception for the Red-tailed Hawk. It much prefers to sit motionless on a dead limb, or a tall tree in a pasture or field, or at the edge of woods. It turns its head slowly, the motion almost imperceptible. But it can see movement, a blade of grass stirred slightly, then another near it, as a mouse moves a tad carelessly out of sight. And it pounces. 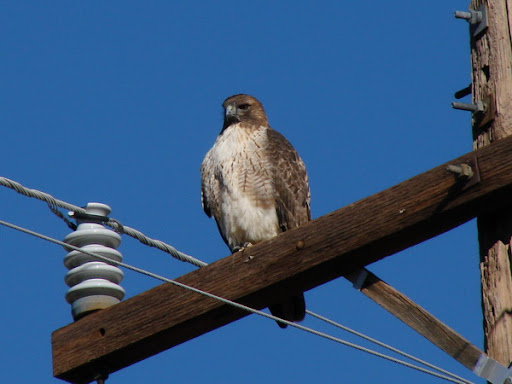 You see their white breast, or their dark erect posture, perched along the interstates. Some stretches of highway in the winter have hawks every few miles, taking advantage of the long, narrow grasslands which modern transportation has created. Waiting, hawk eyes intent for an imperceptible movement that means food.

Or they perch on a building near a city park, as do Central Park Red-tailed Hawks in New York City, looking for the pigeon that is slower, or younger, or under-fed, or slightly injured, or looking the wrong way ... then they fly ... and pounce.

One winter when the Retreat Meadows were frozen, but before the snows had come, my attention was caught by something on the ice not far from the canoe launch on Route 30. A large Cooper’s Hawk, an adult female, perched atop a prone pigeon. Red stained the ice beneath the bird; it was lifeless. But the Cooper’s Hawk was not feeding. It stood erect and alert. It hopped from the pigeon to the ice. Then it flew. From the opposite direction that the Cooper’s flew, a Red-tail came in, pouncing on the dead pigeon. It stood for a moment, then it grasped the pigeon in its talons and flew off. The two pound Red-tail would feed heartily on the three quarter pound pigeon. The one pound Cooper’s would have to hunt again.

I wonder from how far away the Red-tailed Hawk had seen the Cooper’s Hawk take its prey and decided there were easy pickings. 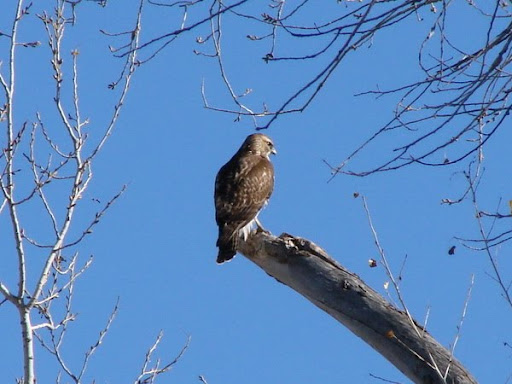 The Red-tailed Hawk can hunt by hovering and stooping, or by swooping and grabbing. But it prefers the perch and pounce method. It is an energy efficient means of hunting. Especially in the cold weather when so many calories are needed just to stay warm, this wait and strike technique makes the calories from a field mouse go farther. In the hawk’s economy, larger prey means more calories for the same pounce expenditure. And if a Cooper’s has already killed the prey, then that is all the more efficient.

Hawk eyes. The term is used of a person who seems to have especially good eyesight and is capable of seeing things other people miss. But even the best human vision pales before the birds. Here is just one tidbit from scientists: “The acuity of avian eyesight is unparalleled among vertebrates: On average, birds can see two to three times more sharply than humans, and some raptors can sight small prey more than a mile away.” A brief summary of this science is in “Sibley’s Guide to Bird Life and Behavior.” You can get the book and read it for yourself.

Right now, I am going to go watch hawks migrating, although they will probably be watching me long before I will be able to see them.

Very nice post - It is truly amazing how good their vision is.

I enjoyed your post and photos about the hawks. They are amazing birds to watch.

Wonderful reminder of their abilities. I enjoyed this post very much.

Chris, your post makes for fascinating reading. Thanks for all the to me new info.