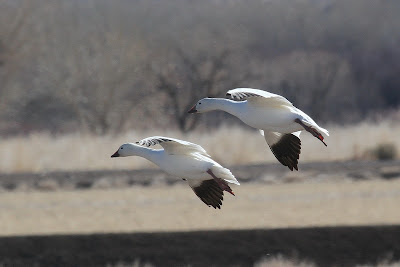 Snow Geese are making the passage overhead on their way to coastal wintering areas along the mid-Atlantic. On a few occasions I have had the good fortune to watch as thousands of birds have materialized out of the gray sky in line after line, then reset their wings, applying the brakes to their flight. In a swirling mass they settled with the few thousand on the ground to rest and feed.

Snow Geese nest on the Canadian tundra, usually within a few miles of lakes, rivers, or  the coast. They migrate in large flocks along narrow corridors, typically stopping over at the same points year after year.

Snow Geese have recovered from near extinction. Market hunting devastated their numbers in the late 19th and early 20th centuries. The total number of Snow Geese fell to a few thousand birds. The Migratory Bird Treaty Act of 1918 outlawed the most destructive hunting practices. The preservation of coastal habitat, principally in wildlife refuges, provided wintering havens. Slowly the Snow Geese population began to recover. For example, at Bombay Hook National Wildlife Refuge on the Delmarva Peninsula, a Snow Goose in the 1960s was a big deal. By the mid 1970s, 9,000 Snow Geese were wintering in the refuge. By the late 1990s the number was approaching 200,000. Overall, the Greater Snow Goose (the one which passes through Vermont) now numbers over a half million, while the Lesser Snow Goose (which generally uses the Mississippi flyway) numbers several million.

Good news? Not necessarily. Most biologists give, at best, a mixed answer, and many are very seriously concerned.

In early November, I will do some coastal birding beginning at Forsyth National Wildlife Refuge near Atlantic City, New Jersey. Within easy sight of the wildlife refuge will be towering casinos. Several miles of barrier islands are covered  with the glitzy hotels and seedy service buildings of the gambling industry. All along the New Jersey coast are upscale beach communities filled with second homes built by people with more money than taste. The coastal birding that I will be doing will be  a series of hops, skips, and jumps from one patch of coastal marsh habitat to the next. The birds which rely on such habitats are being squeezed into less and less space. Wildlife managers worry about an epidemic disease sweeping through concentrated populations, and about the exposure to the toxic chemicals which plague many refuges.

Before development began transforming the natural landscape, Snow Geese had only tough marsh vegetation on which to feed. If their numbers became too great, the flocks were thinned by starvation and the weakened survivors raised fewer young.

But Snow geese are adaptable birds. On the Gulf Coast, marsh land has been converted to rice paddies. The Snow Geese love rice and scarf down the leavings.  Then they move on to glean the fields of soybeans, corn, and other crops. Near Bombay Hook on the Delmarva peninsula, they root through the manure from cattle-feed lots in search of undigested corn. But they still favor their traditional food - the underground rhizomes of cordgrass which they root out with great effectiveness. When the Atlantic coast was cloaked with salt marshes, the Snow Geese could spread over a wide area. Now they are concentrated in relatively small areas, with the result that large “eatouts” have converted thousands of acres of salt marsh into mudflats and open water. Habitat for less adaptable species like Clapper Rails and Black Ducks has disappeared. On the flip side, the new mudflats are quickly found by migrating shorebirds which probe the stinking mud for invertebrates on which to fatten up.

The impact of Snow Geese on their wintering grounds is a mixed bad news/good news story. The adaptability of Snow Geese to new food sources provided by modern agriculture has been a good news story as far as their ability to survive winter is concerned. But this has meant an almost uniformly bad news story for the health of the Arctic tundra where they breed.

Snow Geese are loyal to the place they were born, and return to that place year after year to breed. As their numbers increase on a breeding locale, their grubbing reduces plant cover. Soil dries out. Salt is concentrated at the surface, preventing sedges and grasses from growing. Some inedible salt-tolerant, invasive species move in, but the result is as likely to be a vast “monotony of cracked, frozen, yellow-brown mud, bereft of almost anything alive” (Scott Weidensaul) - a Snow Goose slum as desolate as any inner city slum.

The lowlands of the Hudson Bay are one of the largest wetlands in the world. Over a hundred species, many of them waterfowl and shorebirds, rely on these wetlands for nesting. “The direct loss of nesting cover and food (not only plants but also aquatic invertebrates that once inhabited the hypersaline pools) has knocked the stuffing out of many species. Researchers have seen a drastic decline in the number of formerly abundant birds like Semipalmated Sandpipers and Red-necked Phalaropes; Yellow Rails seem to have disappeared entirely.” (Weidensaul)

Biologists are agreed that the population of Snow Geese must be reduced. But how? Winter hunting rules have been eased, but there are few hunters. They might take a hundred birds out of a flock of tens of thousands. That is not a particularly effective management tool. Plus, the savvy geese quickly learn to avoid the places where hunters are, though once the sun goes down, they may just as quickly return.

The negative impact of the “Snow Goose blizzard” on the winter coastal marshes and summer breeding tundra is so serious, that a few biologists are beginning to consider what has been beyond the range of consideration by conservationists for a hundred years - allowing for the commercial harvesting of Snow Geese. But it is not hard to imagine the kind of political firestorm which that path might create.

On Brattleboro’s Retreat Meadows, there are hundreds on Canada Geese. Few, if any, were born on their historical breeding grounds in the Arctic. They are more likely to have been born on one of our small ponds, or even a golf course. But those Snow Geese which pause at Dead Creek Wildlife Management Area in Addison, Vermont, and which winter along the mid-Atlantic coast are linked to the Arctic. They are wild and unfettered. They are also overly abundant, overly successful, and overly adaptable.

Birding is not always “Good” or “Bad.” Sometimes it is “Ambiguous.”

Email ThisBlogThis!Share to TwitterShare to FacebookShare to Pinterest
Posted by Chris Petrak at 6:00 AM
Labels: Snow Goose

Hello;
Dave here from Sussex County, NJ. Just was outside for a smoke and heard the snows makin there way down south. Stood out there for about 10-15 min. and all I could hear were snows, the whole time. Sounded like a massive flock. Wish I were a little closer to south Jersey so that I could get out a bit more often.

Daz Bor.
Slam'em hard and save a few for me.
Good luck ya'll.