I stayed put during last week’s ice storm. Except for bringing in wood, I did not go out of the house. The lights flickered several times. I had to reset my clocks, but that is hardly unusual. I was insulated from the nasty weather in more ways than one. 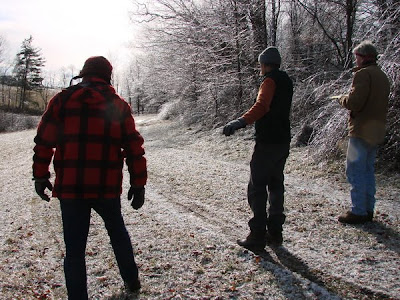 Then came the Christmas count, and I began to realize the storm’s impact on our region. In the Brattleboro area, the 15 mile diameter count circle is divided into seven regions, each with a count team. Two of those teams begin the day at my home. On the count morning, nine people gathered from seven homes. Only two had electricity. A couple from near Springfield who were planning to take part had called the night before to say they were not coming - no power and blocked roads.

By now we know how severe last week’s ice storm was. At the evening pot luck, we were still relying on civilization’s oldest medium of mass communication - word of mouth. But the personal stories were not the main topic of conversation. Twenty-seven people had spent 170 people hours in the field. They had driven a cumulative 325 miles, and walked an additional 4 miles. A brisk day had gotten colder and more bitter. Closed roads created detours from the planned routes. Ice from above pelted heads and underfoot caused slips and falls. And at the end of this day, we talked about birds.

There was nothing unusual about what we did. The North American Christmas Bird Count in late December involves tens of thousands of people setting aside all other seasonal activities to take part in perhaps the largest citizen science event of the year. In whatever part of the country, the only thing that could be worse than the weather would be missing a count and not knowing how the early winter bird count this year compares with previous years and future years.

So we talked about weather, and we talked about birds. By the end of the compilation party, the mood was almost euphoric. The bird count for the Brattleboro area was the highest ever, around 5600. The number of species tallied for the day was 57, plus an additional 5 during count week, for a total of 62. Only in 2004 was the species number higher - 65.

Looking at the highlights and gleanings from the Brattleboro CBC, let’s start with the Bald Eagle. One or two have been seen every year since 2002. Five were counted this year along the open waters of the Connecticut River. Three adult eagles were seen together; at another location two sub-adult (probably first year birds) were counted.

The open waters also accounted for the highest recorded count of Canada Geese - almost 1100. In addition there were seven other species of waterfowl, including two late drake Wood Ducks. 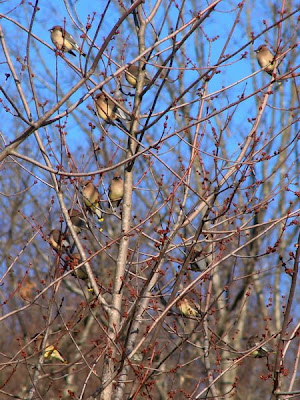 A thousand Cedar Waxwings (triple the previous record) put this species into the abundant category. The number is probably low. The group I was with recorded 100 in an apple orchard feeding on the remaining fruit, but that figure was frankly a guess, and probably a low guess. We would see 20 to 25 waxwings moving about in a couple of trees, while distantly we saw more birds bouncing around, and yet more in peripheral vision to the left and the right. On another occasion, we watched waxwings feeding on rose thrips in between flights to and from protective pine trees. We tried counting, but the end result was another conservative guess-timate.

Last summer was a banner year for fruits and berries, and the waxwings are just one species using these food resources. Mixed among the waxwings were American Robins; usually counted in the single digits, this year’s 100+ was the second highest total. 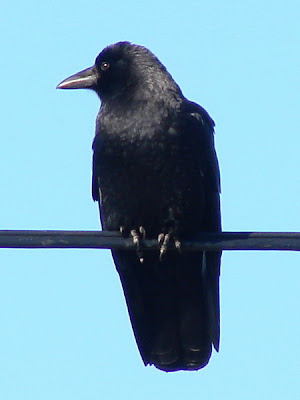 Winter finches had a banner year in 2007. They often appear in a two year cycle so they were not expected this year. Nevertheless, there were a few Snow Buntings, Purple Finches, Evening Grosbeaks, Common Redpolls, a single Pine Grosbeak, and a probable Red Crossbill. American Goldfinch was seen in record numbers (over 450) along its cousin, the Pine Siskin, which also broke records at 220+. In the last five years, the siskin has been virtually absent from our CBC.

In looking for patterns, it appears as though the number of common feeder birds is down. Chickadee, titmouse, cardinal, Blue Jay, the nuthatches, Mourning Dove, Downy Woodpecker - the number for all of these was down from recent years. But why? Perhaps the plentiful supply of natural food means they are less dependent on feeders. Perhaps fewer people are feeding, the birds are going elsewhere, and the counters did not find the active feeders. Perhaps their population has declined for some reason.

Or perhaps the counters did not work as hard at counting these birds. Our group spent a lot of time trying to get counts of the waxwings. Chickadees flit back and forth so rapidly that it is difficult to pinpoint different individuals. They are so much a part of the background scenery, that we may have just taken them for granted and thereby undercounted the chickadees and the other feeder birds that travel with them.

Two Northern Flickers were seen; usually a migrant, it has been absent in recent years. Red-bellied Woodpecker numbers continue to increase. Wild Turkeys were hiding in the protective pines; only 20 were counted. Fourteen Red-tailed Hawks matches recent count levels. 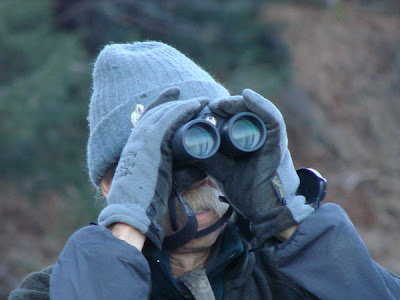 Rock Pigeon, European Starling, and House Sparrow are the birds that birders love to hate. One member of my team gags when I insist that we have to count them. The good news/bad news is that the numbers for these species is neither higher or lower than the range from previous years.

The Christmas Bird Count is a snapshot of the early winter bird population. It provides data for researchers as they study trends. It engages many people in citizen science. And it is almost always a day of good birding!