There are some people that make such an impact on their field, that their influence continues long after they are gone. They become almost franchises that keep paying dividends to their heirs for years. Elvis Presley comes to mind. Charles Shultz’s Peanuts is another. Arthur Conan Doyle’s Sherlock Holmes and Ian Fleming’s James Bond go on and on.

In the bird watching field, Roger Tory Peterson fills that bill. In 1934, Peterson published his first field guide to Eastern and Central birds. The guide was revolutionary and transformative. Founded on good illustrative paintings of the birds, Peterson employed an identification system (known as the Peterson system) which uses arrows to point to key field marks and to focus on the differences in similar species. It was simple; today it seems obvious, but when the first edition appeared it was innovative and revolutionary.

The first printing Peterson’s new bird guide was 2,000 copies. It sold out in one week. The field guide and its subsequent editions has never been out of print. Peterson continually revised his work during his life time. The fourth edition was published in 1980, and his estate continued his work with a fifth edition in 2002, six years after his death in 1996 at the age of 88.

Peterson’s field guide melded the paintings, the identification system of arrows, and compact, descriptive text into a small portable volume. The result made it possible for anybody with a pair of binoculars to identify birds. Bird watching was no longer the exclusive domain of ornithologists and eccentric amateur naturalists. It became accessible to the masses and created the interest which makes bird watching today one of the largest spectator sports in America.

Peterson not only transformed the world of bird watching by teaching people how to watch birds, he also changed the English language. The word, "bird,"a noun, has become a verb and an adjective and has hatched new nouns. I bird. I have birding books and birding equipment. I am a birder who goes birding to see birds.

The respect which Peterson earned as a naturalist, not to mention the commercial success of the field guide to the birds, led to a whole series of Peterson Field Guides, based on the same principles as the bird guide.

Not long after the publication of the fourth edition in 1980, I attended a Pennsylvania Audubon banquet in the Valley Forge, Pennsylvania, area, not far from Mill Grove, the first home of John James Audubon. Roger Tory Peterson was the speaker. His personality commanded attention, and I still remember some things from his address (which is quite remarkable since I often can’t remember what I have said in a public address a week later). The morning of the banquet, Peterson had visited Mill Grove. When he got out of the car, the first bird he heard was an Eastern Phoebe - one of the first birds with which Audubon became familiar, and the first bird which Audubon banded - perhaps the first bird ever banded in America. Audubon was interested to know whether the resident nesting phoebe returned to the same place year after year, so he captured it and tied a colored thread around its leg. The next year he recaptured the same bird. Peterson then added, with wry wit, that the second bird he heard that morning had never been seen or heard in North America by Audubon, although it is now one of the most common birds - European Starling.

At the end of the dinner, Peterson autographed copies of his fourth edition. I had mine autographed. Somewhere in the intervening years, that autographed copy has gone missing. Someone borrowed it, or mislaid it, or stole it. It could not possibly have been anything that I did or did not do. Periodically, I still mutter a curse at whoever is responsible for my autographed copy going missing. 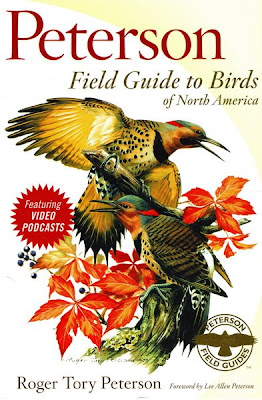 A new first edition "Peterson Field Guide to Birds of North America" was published this year. During his lifetime, Peterson published two bird guides - Eastern and Central Birds, and Western Birds. The new guide combines the two guides into one volume. At 6" x 9" in size and 2½ pounds in weight, it is not an easily carried field guide. Like the original Sibley guide published in 2000, some special arrangement needs to be made in order to carry it when birding. My rule of thumb for a true field guide is that it can fit into the back pocket of a pair of jeans.

No field guide to birds is perfect. You need more than one guide, in the field or for reference in the back seat of your car or by your arm chair at home. You should probably have several bird guides. One of them should be a Peterson guide, such as this splendid one volume edition.

The new Peterson guide updates all of the taxonomic and name changes with new paintings of split species, accidentals and vagrants. Small range maps are next to the text of each species, while larger maps are in a special section in the back. The illustrations are larger, the plates uncrowded. Often the birds on a plate are presented in relative size to the others on the plate so that the size difference among similar species is visually apparent.

The Peterson guide is especially good with very similar species. For example, four very similar small terns (Forster’s, Common, Arctic, Roseate) are grouped on one page. Differences in head and bill are easily compared, as are those wing characteristics which are only glimpsed in flight but which distinguish the species.

A useful feature, which I think is unique to Peterson, are the pages of black silhouettes inside the back cover (shore, flight, and roadside), and scattered elsewhere through the volume. Without using the term, these incorporate "giss" (general impression, size, shape), an identification technique much in vogue and very useful.

Nearly every field guide includes a few pages about bird biology, topography, and identification techniques. Often these are wordy essays, dense, and sometimes obtuse. Peterson’s essay on identification is brief and clear. Like the descriptions of the birds themselves, he gets directly to the issue of identification beginning with a series of simple questions. Know those questions and ask them when you are in the field, and you will quickly gather the information you need to make an identification.

During his lifetime, Peterson made thousands of people into birders with his field guides. Twelve years after his death, he is still making us into good birders, and the new "Peterson Field Guide to Birds" can make us into better birders.

Email ThisBlogThis!Share to TwitterShare to FacebookShare to Pinterest
Posted by Chris Petrak at 6:00 AM
Labels: Peterson Field Guide to Birds

Who knows where to download XRumer 5.0 Palladium?
Help, please. All recommend this program to effectively advertise on the Internet, this is the best program!