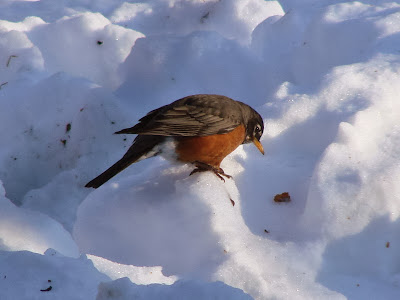 Once robins have completed their breeding season - which may involve raising three broods - they begin to collect in flocks, often of hundreds, or even thousands of birds. As the season progresses, their diet shifts from animal protein during spring and summer (earthworms, grubs, insects and the like) to vegetable matter, principally fruit in the fall and winter.

These large flocks wander, roam, and migrate. My late October trip to Cape May coincided with the passage of robins through southern New Jersey. Huge numbers of robins fell out of the morning sky after their night flight, feeding on the junipers, winterberry, bittersweet, sumac, and other berries. (Not coincidentally, the robins’ descent into the trees and shrubs was followed by Sharp-shinned and Cooper’s Hawks.)

The American Robin is one of the most widespread, familiar, adaptable, and successful species in North America. Except for southern Florida, extreme southern Texas, and the southern  Arizona and California deserts, it breeds throughout the continent, north to the Arctic tree line. As winter approaches, it abandons its northern range and heads south.  Most range maps show it absent from the northern Rockies, northern Great Plains and most of New England in the winter. But not necessarily ... when I went to Montreal a few winters ago in pursuit of the Great Gray Owl, I also saw many wintering robins. 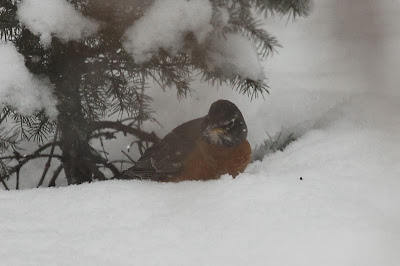 Unfortunately, that wonderful old piece of folklore about “Spring is on its way, I just saw the first robin” is not true. Robins can be found just about anywhere in the lower forty-eight during the winter. While typically wintering in large flocks, those flocks can be very nomadic; if their nomadic ways don’t intersect with our ways, then we conclude that they are not present - gone south.

The robins that nest in our neighborhood have probably gone south, while the hardier birds which breed far to the north, have moved down to replace them. But, through the whole continent, there is little variation in the American Robin (Turdus migratorius), an indication that breeding populations are constantly being mixed. Only in Sibley’s Guide are regional variations noted, and those variations are very minor - western robins have limited white tail corners - Atlantic Canada robins have a blacker nape and upper back.


The species name, “migratorius,” does suggest that a characteristic of the robin is its migration. It wanders (migrates) all over the place.

The American Robin belongs to the thrush family, subfamily Turdinae, and the Genus Turdus. It is the only member of its Genus that any of us are likely to see. Rufous-backed Robin and Clay-colored Robin are accidental at a few places near the southern border, and the Fieldfare from Europe turns up in the East only on very rare occasions. The full and official common name is “American Robin,” but Turdus migratorius is so common that almost everyone knows what you are talking about when you talk about “robins.”


Nevertheless, we should never underestimate the ability of grammar to create confusion. When looking for information, I googled “winter  robin” and found many articles referring to, or even titled, “Winter Robin.”  “Winter Robin” sounds like the common name of a bird species, and I have had a couple of occasions when I have had to explain otherwise. “Winter robin” refers to an American Robin that is wintering in a wintery area - staying the winter, or being seen during the winter. It might better be referred to as a “wintering” robin. Not all robins abandon our north country and head south. Not all robins pass through our north country for more temperate winter climes. Some robins, probably from father north, stop here, and may even stay here for the winter. They are wintering.


You should not be surprised to see robins throughout the winter. They are warm-blooded. They have remarkable insulation from their down feathers. They can maintain body heat through a cold night by shivering. They can survive as long as they can get enough food during the day to replenish their stored fat reserves.

There are factors which will affect whether you see robins during the winter or not. The biggest correlation is snow cover. Data from the Great Backyard Bird Count done annually in mid-February indicates that the probability of seeing robins  drops “dramatically in areas with even just a few centimeters of snow cover.” Unusually low snow cover often results in unusually high numbers of robins, a pattern which has been seen over several years of accumulated data. It seems that robins, which are primarily ground feeders, avoid snow-covered areas.


Robins are self-sufficient and quite capable of finding their own food sources. If they appear around backyard feeders, it is because there is some other food source. They do not eat bird seed; their stomach and intestines are not designed to digest such food. Some people have enticed robins to bird feeders by putting out cut up fruits (apples, pears, cranberries, blueberries), softened dog food, or a variety of worms. The problem is that most robins have never heard of such a thing as a bird feeder. It just doesn’t occur to them to seek human handouts. It has been suggested that putting out “robin food” during severe weather might be helpful, but it is more likely that the squirrels will find the food before the robins do.

Do not be surprised if you see robins this winter. They are American Robins which are wintering - hence “wintering” robins. Their rattling call can brighten the dreariest of winter days, and should any of those winter days turn pleasant and mild, they are likely to burst into cheerful caroling.

Email ThisBlogThis!Share to TwitterShare to FacebookShare to Pinterest
Posted by Chris Petrak at 7:05 AM
Labels: American Robin, wintering robins