I finally got over to Gloucester, Massachusetts, for a day of winter coastal birding. The highlights of the day were a King Eider (too distant for a good picture, but very recognizable), Thick-billed Murre (way too distant to even try for a picture), and Dovekie (barely popped to the surface before diving again).

Among the unusual wintering gulls, was the Black-headed Gull (in rear near rock). Even though the gull is small in this photo, I liked the other gulls and ducks in the foreground. (Greater Black-backed, Herring, Common Eider, female Red-breasted Merganser). This was near the fishing pier in Gloucester Harbor. 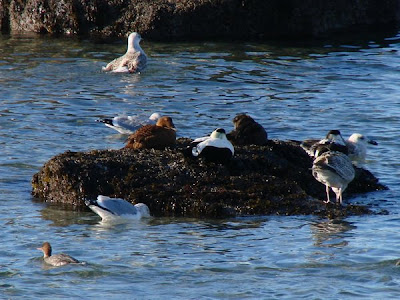 Also in the harbor was a first year Iceland Gull, or as the more precise and obsessive birders like to say, a "Kumlien's" Gull (a subspecies of a difficult to classify light-colored, or light gulls). 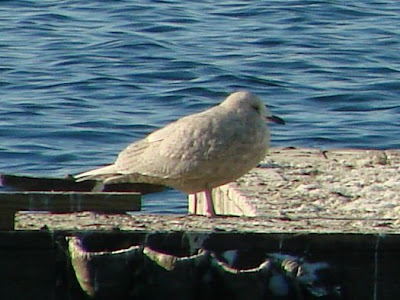 On Niles Pond, there were at least four additional Iceland (Kumlien) Gulls among the many Greater Black-backed and Herring Gulls of assorted ages. Also at least two Glaucous Gulls and a Nelson's (Glaucous x Herring. Hockey players kept the roosting gulls at a considerable distance. Glaucous is the large white gull in the center.

Sea ducks are always a significant feature of winter coastal birding, and all of the usual suspects were there, including all three scoters. This White-winged Scoter was quite close ...

... and one of the showiest of all ducks, the Harlequin Duck. 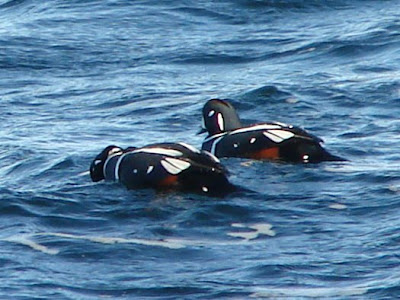 A day of Good Birding.

Great photos...I always love seeing the harlequin duck.
Looks like you had a productive birdie day..
If you havent yet discovered this blog you should check it out and add it to your blogroll
I found it recently
http://www.birdingmaine.com/