Life and Death Around the Feeders

In early July, I wrote about the word “cute” as it is applied to birds. Back in the summer, very young birds are typically described as “cute,” although in fact they are clueless. They chase parents around, begging for food. They are slow in learning about food sources, and slower in learning about danger. I took a lot of friendly teasing over my protest on the use of “cute,” and probably did not change the verbal habits of anyone, but I shall continue to insist that “cute” is not an appropriate adjuective. 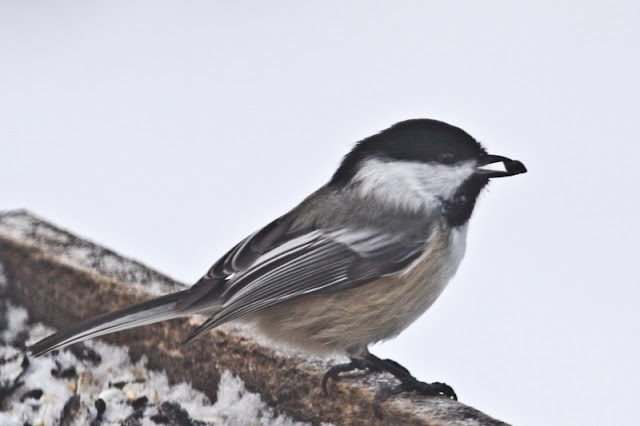 Now it is winter, and some of the birds coming to the bird feeders are still “cute” in the minds of many. And some are apparently still clueless. I admit that I enjoy watching the frenetic activity of many of the birds which feed on my largess. Along with my favorite companion (who is likely to use words like “cute” or “adorable”) I especially enjoy the woodpeckers, chickadees, titmice, and nuthatches.

The two woodpeckers, the Downy and the Hairy, wait patiently in nearby trees when I take in the suet feeder to refill it. When I rehang the suet feeder, I call out, “Okay, guys, come and get it.” There is a bit of chatter and by the time I am back in the kitchen, they are on the suet or waiting a turn on branches overhead. The Hairy is stocky and robust, and doesn’t say much to me. The Downy is “cute” as it peers down at me and chatters a “thank you,” or perhaps a “couldn’t you do it faster next time.”

The chickadees, titmice, and nuthatches come quickly to a feeder, grab a seed, and fly. Their acrobatics are entertaining. The actions of these year-round neighborhood residents are not all that different from what the juncos and sparrows are doing, but the ground feeders are not described as “cute” nearly so often. 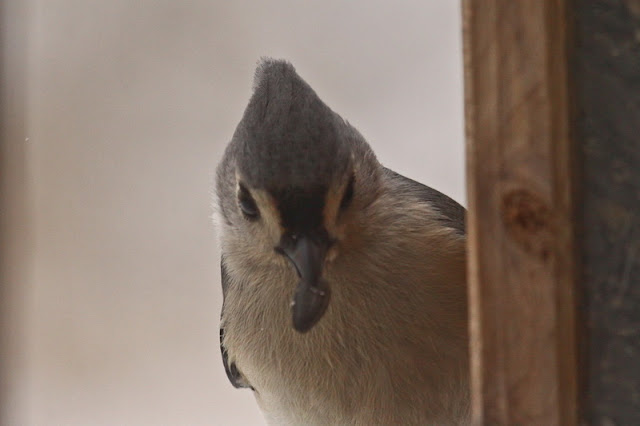 The secret is in the eyes. The dark eye of the junco is not as noticeable against its dark head as is the dark eye of the titmouse. But any of these birds, or any small songbird, might on some occasion perch on a branch and look down at you with its head turned and cocked to the side, giving you the curious once-over in a very “cute” manner.

But there is serious business in the head-cocking, neck turning, hurry up - grab the seed - head to the bushes. The big eyes are located on the sides of the head, giving them a wide vision as they constantly watch for danger. They turn their head in order to get a look at me. And more importantly, they don’t linger to study a sudden movement in the periphery of their vision; they flee.

We call them “bird feeders,” but our bird feeders feed much more than just small songbirds. There are red squirrels and gray squirrels which find food on the ground or in the feeders. Field mice run tunnels beneath the snow, and gather the seed. Chipmunks stuff their cheeks throughout the fall and cache the seed in their burrows. At night deer feed on the fallen apples and lick the platform clean of seed. At different times of the year, skunk and bear scavenge food.

There are all kinds of food at the bird feeders. There is seed which feeds birds and animals. And then there are the birds and animals which feed other birds and animals. The eyes of predators do not look to the side. Their two eyes look forward. With keen binocular vision, they look for food. A fox looks for a mouse; a fisher spies a grouse. Your sweet, family cat with its eyes in front, hunts rodents and birds. Steathly slipping into a tree, the Sharp-shinned or Cooper’s Hawk studies the food possibilities around the feeders.

I sit at my kitchen table and watch the birds outside my window. A dozen Blue Jays are going to and from the various feeders. Suddenly they fly ... and every other bird flies; the jays are screaming loudly as they disappear into the pines. Somewhere nearby there is a hawk.

When the jays begin their loud alarm calls, I pay attention. They are warning everyone of danger. On a rare occasion, I see the jays mobbing a still silhouette in a tree, preemptively dealing with danger. A couple of times a year, I see a sudden flash through the yard as a hawk makes its attack. Most often, I see only scattered feathers lying about the grass or fluttering across the snow, silent evidence that the life and death struggle to find food has played out with some birds winning, and others losing in a fatal way.

When you put out a bird feeder, you must accept that hawks will come as well as chickadees. Sharp-shinned and Cooper’s Hawks are feeder birds. You can put your feeder where there is cover for the small birds - bushes, pines, trees - the thicker and more tangled, the more protection. But you must accept that hawks are sometimes going to look for food among the birds at your feeders, and sometimes they will be successful. If you cannot accept that, and leave the hawk unmolested as it hunts, kills, and dines, then you have no business feeding the birds. 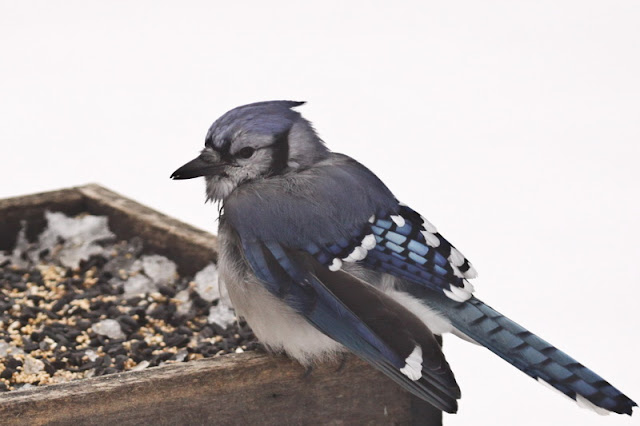 Beyond those feathers scattered about the yard, I have had two recent experiences which lead me to issue the following: Warning, bird feeders are not for the faint of heart.

On my platform feeder a week ago, a Blue Jay was busy eating. It ate seed after seed after seed. But unlike the other jays, it did not come and go. Feathers around its neck were disordered and messy. One wing did not fold against its body and primary feathers were askew. When it finally flew, it did so with difficulty. In all likelihood, this Blue Jay had a near fatal encounter with something. Perhaps it damaged its wing as it fled from a hawk through a tangle. Perhaps it was hit by a young hawk, still not adept at taking prey, and escaped, but with injury. I only saw the injured Blue Jay one day. Unable to fly well - unable to use its feathers for full protection against the cold - it probably did not survive for long. 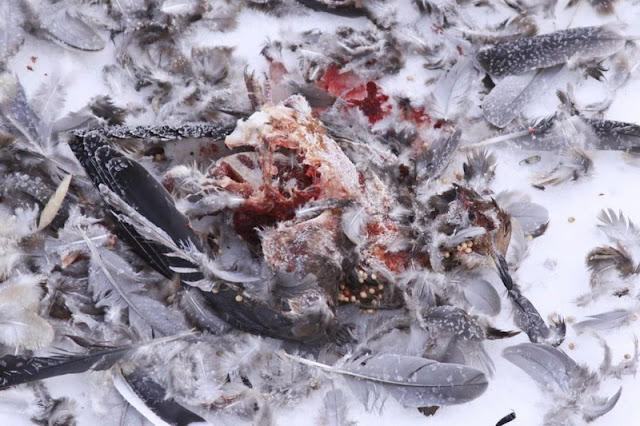 Sunday morning I saw a large dark circle atop the snow with a mound of red in the middle. When I went out to fill the feeders, I inspected. Beneath the three foot circle of downy feathers, the white snow was stained red. Bloody breast bones were picked clean. Part of the head remained to confirm the identification. The flock of thirty Mourning Doves which visit my feeders every morning had been reduced by one. A Cooper’s Hawk, the likely predator, had fed well. 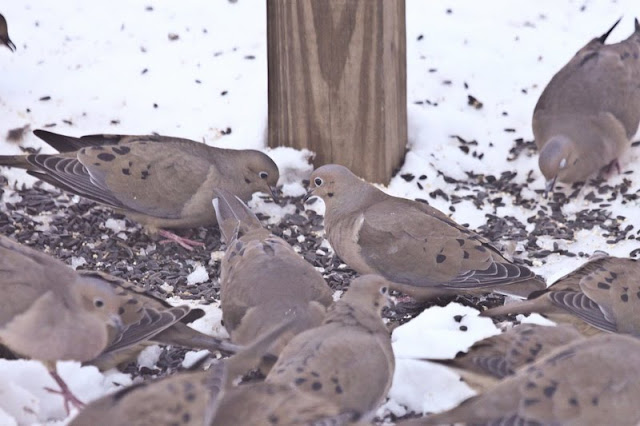 The amusing antics of the chickadees, titmice, and nuthatches are serious business; there is nothing “cute” about them. These birds are in a race for life - contending with winter storms, freezing temperatures, and dangerous predators. Most of us have solved the problems of food and warmth during the winter. We have the luxury of warm dwellings and stocked pantries. We lighten the long, dark nights with neighbors, singing nowell clearly. We cosy down with the miracle of light and carols of hope. But the danger and struggle is never far off. It is as near as the other side of the window pane.

Great post and Photos,. I really enjoyed the post. I love feeding my yardbirds and right now they are going nuts at my feeders with the snowstorm we are having.

This was a great read!

Heartily agree with Jen--your blog is always a good read. Great point that when we set up feeders they generally end up being a food source for more than just songbirds. Fantastic shot of the titmouse looking towards the camera straight on.

Great post...I don't mind if one animal preys on another, as it should be...I have a bigger problem though when man is the hunter.

...enjoyed your post....
"Cute" or not, my feeder birds bring happiness to my heart when I hear and see them, but boy are they tough! Life and death at the feeder is so true. As the snows move in, and the weather conditions worsen, they hang on. (As with Susan, I understand when a Cooper's Hawk nabs a bird...he has to eat too...)

It is what it is...god gives and he takes away! All creatures bring smiles to our faces if we love life..but we also know that all have to eat!
I just wish I could create the menu for my coopers..house sparrows would definitely be at the top, followed by cow birds!!
Good post and informative...but I still find those sweet little faces cute and endearing..sort of an escape from reality for a few..
Hope you have a nice Holiday and enjoy your times with family and friends!

Excellent read Chris and I am one who refers to most of the birds in my yard as cute, but I was also overheard calling a Great Horned Owl as cute while looking at one in a scope at Plum Island!! ;-),

The circumstances in which all birds have to bear year round (with winter in particular) and indeed not cute like you said and that is why I enjoy feeding the birds as much as I do in winter even though I am rarely home enough to enjoy it. Just knowing I am providing a place for birds to come and get a free meal is satisfaction enough for me. I too get a hawk kill on occasion and realize that's just part of the natural world and hawks need to eat and they eat birds, just as many of us eat chicken on the grill on the 4th of July and turkey on Thanksgiving.

Wow!
I appreciate tremendously this article of yours!
At long last someone sees things for what they really are: Nature is about BIRTH, SURVIVAL AND DEATH!!
No "cute" soft heart feelings where animals are concerned!
Did you know parrots can bring their eyes forward to see straight in front?!
Also I appreciated your visit and comments about my cranes!!
Cheers Rob,
Merry Xmas to you and your family!

PS:
Many thanks, Chris, for your appreciative comment: I believe that anything can be done by anyone but it all boils down to being honest about it!
Sorry I called your Rob above, but my brains cells tonight are not very functional!!
I am glad we have established a proper relationship, now!
Cheers again!

You are right. Life is serious business for all of us. "...the struggle is never far off."
Well written, Chris.