Along the Rock River 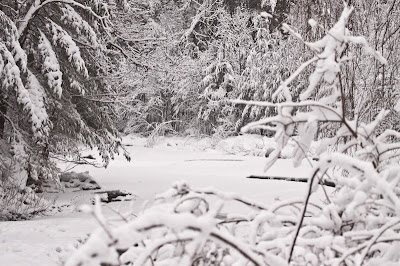 I usually begin this weekly exercise very early on Monday morning. But on this past Monday morning, I awoke to the wonderland of a new snowfall, and to the need to dig out. When that task was done, I brought in wood for the wood stove. Then I walked down to the river that runs behind my home.

“River” is a bit of a misnomer. River implies something large and long. The Rock River is neither. I am only a few miles from its headwaters. It flows past me for a few miles and then joins the more appropriately named West River and eventually the Connecticut. During Spring melt and following torrential rains, the Rock River rages like a river for a day or two. Then it settles back into its placid mode. In all seasons, it would be better described by “brook,” “creek,” or “stream,” but whoever made the entry on the geographical maps preferred the alliteration of Rock River.


So Monday morning I waded through the new snow to the river bank to look at the river. The day after Christmas, rain washed out the ice, heaving large chunks onto each bank and leaving the water open. Now, three weeks later, the ice has returned. In most places it spans between the river banks, giving animals a dry bridge across the frigid water. Tracks crisscrossed the snow covered ice giving evidence that life has continued its activity even as I lay abed, enjoying the snow muffled quiet of the winter morning.


Where the river flows swiftly, there are still open places, but if a frigid January returns, it will quickly close up, forming an ice cover of eighteen or more inches. It happens most winters. A few winters, I have been able to snow shoe down the middle of the river for long distances.

On those winters when the Rock River is completely frozen over, it then becomes a gauge by which the return of Spring can be measured. As the sun acquires more warming power and the temperatures begin to moderate, the river slowly opens up, with a patch here and a patch there.

About ten years ago, the river had frozen completely. Around the beginning of March, hints of Spring began to be felt in the air and the ice slowly began to retreat on the river. By the middle of March a couple of pools had opened up and the flowing water could be seen for the first time in weeks.

By happenstance, I was watching the river from my kitchen window when two birds flew upstream along the river highway and landed in the first open pool. One was a drake Common Merganser, his large, bright white body, breast, and neck prominent against his dark back and green head. The other was a hen merganser with her gray back and rusty-brown head. They rested for a few moments, and then both dove. When they surfaced, it was about ten yards upstream in the second open patch in the river. They paused again for a few moments, then took flight and headed swiftly upstream.

I see Common Mergansers along the Rock River waterfowl highway several times every year. In the spring, a pair flies rapidly upstream a few feet above the water. Sometimes an hour or so later, I will see a pair fly rapidly downstream. Less often, when I am especially lucky, I may see one or two swimming down the river. The mergansers are very wary. When they even sense my presence, they take to the wing.

In March and April when the mergansers fly up the Rock River, I know what they are doing. They are in search of a nest site. Looking through my records, I found that there was one year when I recorded a Common Merganser on January 18. I think it was a mild winter and the river was open. Even so, that seems like a very early date for one to be wandering so far from good fishing grounds.

Common Mergansers prefer deep, clear lakes and rivers where they can pursue their foraging-by-diving lifestyle. You will often see them on the waters of the Retreat Meadows, lower West River, and Connecticut River. They are hardy birds, and in winter some will go no further south than the nearest open water. 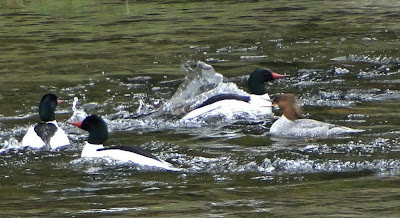 Fast moving shallow water is not the Common Merganser’s preferred habitat except when there are other overriding urges. Early last May along the West River I watched four drake Mergansers courting a single hen. They swam in a tight circle, posturing before one another. Occasionally a powerful kick from a drake’s foot sent a spurt of water 3 or 4 feet long. The splash was the merganser variation of sexual display. He was showing off his bright red foot, and the power contained in it. 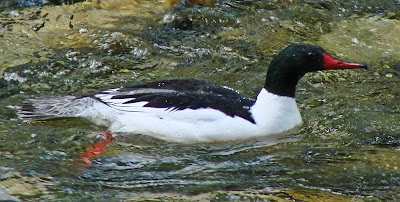 One June I was in an evergreen blind along the Rock River when a pair swam downstream. The bright red feet of the drake were clearly seen through the clear water. He had won her over, and they were returning from their upstream inspection of nesting sights.

I know that mergansers nest along the Rock River somewhere upstream from my home. Their nest is probably in a hollow tree; it could also be on the ground. When Audubon found their nests, they were on a marshy island, but most accounts describe nest holes. When I see a pair of Mergansers going upstream, or downstream, I know that journey is related to breeding. However, as soon as the eggs are laid, the drake disappears. The hen does the incubating and cares for the young alone.

In the mid-summer, the hen leads her young brood down the Rock River to the deeper waters of the real rivers downstream. Bobbing downy fluff balls float with her on the river’s current. She is as wary as ever, and when she senses my presence she speeds up, paddling her feet so rapidly that she almost walks on the water. Her young, desperate that she may disappear ahead of them, follow her in a near panic.

The Rock River behind my home is still partially open, but I do not expect to see any mergansers for a couple of months. For the time being, this rocky mountain stream flows gently, mostly hidden by the covering ice.

In our culture of instant gratification, the frozen river reminds me to be patient, and to accept what the day brings. A merganser pair is not going to be flying upriver on this day. It will be many months before a brood of young mergansers goes bobbing downstream. Today’s gift is new snow, a clearing sky, and sun sparkling on frozen water crystals. I am gratified ... and grateful.

Email ThisBlogThis!Share to TwitterShare to FacebookShare to Pinterest
Posted by Chris Petrak at 6:00 AM
Labels: Common Merganser

Thanks for sharing the past and providing an insight into what is to come.

Hi Chris,
Gosh you have snow man!!! That's incredible but the river landscape is gorgeous under the snow... Nice to share with us pictures of what the river will become in few months and what pictures you will show us!

Great shot of mom and her babies; they're so cute and have such a cool pattern! I've never lived in an area where mergansers breed; I've only seen them in the winter--so thanks for sharing!