On a return trip to the Rochester, NH, water treatment plant this week, the Slaty-backed Gull was still absent, but the Black-headed Gull was present, cooperative, and photogenic. There were also several Iceland Gulls and a single Lesser Black-backed Gull among the several thousand Ring-billed, Herring, and Greater Black-backed Gulls. No Glaucous on this day. 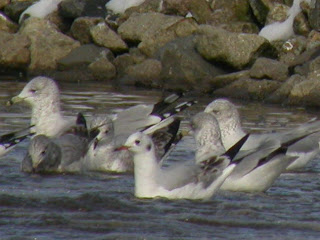 Email ThisBlogThis!Share to TwitterShare to FacebookShare to Pinterest
Posted by Chris Petrak at 8:59 AM
Labels: Black-headed Gull

When I am out birdwatching, I see Ruffed Grouse fairly often, but I have rarely watched a Ruffed Grouse, the way I might watch a chickadee as it moves from branch to branch or tree to tree, or the way I might watch a downy woodpecker as it excavates its nest hole or hammers at bark in search of tasty morsels. Rather, I may be walking slowly along an abandoned lane in a mixed forest where many young trees, like aspen or beech, are beginning to replace the scrubby brush. A few feet in front of me an explosion shatters the peaceful stroll, creating a full body startle, a gasping intake of breath, and a jumbling of my internal organs. With a thunder clap of wings, a Ruffed Grouse has burst from the understory. Like a clutch-popping dragster, it accelerates to top speed in an instant, flies low, veering and rocking, and putting the first substantial tree between me and it. It glides to a landing, and vanishes again into the understory, disappearing completely, as though it had dematerialized.

Such are most of my encounters with the Ruffed Grouse, or “pahtridge,” as folk say in New England - sudden, heart-stopping, and brief. By size, by shape, by flight, perhaps with a glimpse of dark band on the tail as it flies away, I know that is a Ruffed Grouse. But it is not a bird which I get to “watch” very often.

One time I was with a small group of birders walking an old logging road when a hen grouse burst from the brush. Wings whirring, she flew at us. Her attack froze the others. I ducked. Simultaneously, a dozen young grouse dashed across the road. She swerved and followed her young into the forest. Recovering from our shock, we had a brief moment to watch as she hurried through the ferns and forest litter, leading the scurrying young quickly away from the danger we posed. Her defensive aggression worked. Even the Labrador retriever was so discomposed, that the grouse was long gone before the dog realized that it had been bred as a game dog.

The Ruffed Grouse is a member of the family Phasianidae, which includes grouse, pheasants, turkey, and quail. These are sometimes referred to as “chicken-like” birds. One of this family’s members, the Red Junglefowl, is believed to be the ancestor of the domestic chicken. In Europe, many members of this family, particularly those found in Great Britain and Europe, are known as “partridges.” When the English settlers encountered North America’s Ruffed Grouse, they saw it as similar to the partridge with which they were familiar, and named it thus.

The origin of the word, grouse, as applied to birds, is obscure. Not so with partridge. “Partridge” has been traced back to the Latin perdix. Europe’s Gray Partridge (introduced to North America) is Perdix perdix. The Latin perdix is related to the Greek perdika. These words derive from the verb meaning “to fart.” It is thought that this refers “to the flatulent sound made by the bird’s wings when it flushes.” (Leahy, The Birdwatcher’s Companion) I’ve never thought to describe the sound of the flushed Ruffed Grouse as flatulent-like, but the way in which a grouse flushes does tend to scare something out the observer, in a manner of speaking.

Most grouse are polygynous. Males of open-country species gather in groups, called leks, to strut and display. Each male defends a small territory, seeking to impress the females to enter their circle and mate. Forest grouse, on the other hand, do not form these tight leks. Our Ruffed Grouse (the male) defends a small portion of his larger home territory against intruding males. Females wander about, visiting the displaying males, choosing their mates, and probably mating with several males.

The male Ruffed Grouse does a lot of posturing, strutting, and displaying in his pursuit of love or war. But his courtship antics are most characterized by his “drumming.” During the spring, his low-pitched drumming is one of the everyday sounds of the forest, although some say that the drumming is more often felt than heard. On several occasions, a friend with acute hearing has announced the drumming of the partridge; on a few of those occasions, after concentrating, I have heard the deep-toned drumming, “like the muffled beating of a great heart,” as Forbush described it.

Intruders of all kind can draw the wrath of a Ruffed Grouse defending his territory. A friend was driving a dirt road in Guilford one spring day, when his car was assaulted by an angry male. The bird flailed the rear window with his wings, then directed his attack at the windshield. After a few stunned moments, my friend drove on, not wanting to aggravate - or confuse - the grouse’s super-activated libido.

When Europeans first settled in North America, the Ruffed Grouse was sometimes known as the “Fool Hen.” It was so tame and unsuspicious that it could be killed with stones or knocked over with sticks. They are much warier now.

Last September someone showed me a grouse which had flown into her window with such force that it broke its neck. About the same time, someone else told me about a grouse fatally striking their home. Forbush describes autumn as the “crazy” season in the Ruffed Grouse’s annual cycle - “the swift-flying birds dash against houses or through windows, and some have been known to go through the glass of moving motor-cars ....” Unfortunately, the Massachuset’s ornithologist does not offer any reason for this “crazy” season. Autumn is the wrong time of the year for hormone-driven craziness. Perhaps younger birds are trying to find a territory, with older birds taking exception.

Ruffed Grouse are hardy birds, living year-round in our woodlands. They can tolerate extreme cold. If necessary, they can survive on twigs and dead leaves. As our Vermont forests mature, management for grouse habitat has developed. Grouse prefer mixed deciduous-coniferous forests which are in the early stages of succession. The Ruffed Grouse is a game bird and the management is often done for the benefit of sport hunters. It is also a favorite prey, especially in the winter, of the Northern Goshawk which resides year round in our forests.

Occasionally the Ruffed Grouse will stray from its preferred cover and feed beneath a bird feeder. A neighbor has reported grouse at her feeder on several occasions. Such an occurrence provides an opportunity to “watch” the grouse. More typically, the birdwatcher will be startled by the Ruffed Grouse and only glimpse it as it flies away.