Brown - But Not Boring

In a post on my blog some time ago, I made a passing comment that European birds are dull. My comment prompted an e-mail from a British birder: You have obviously never felt the numinous awe when in the presence of a Garden Warbler in full nuptial splendour! Some would say that they even surpass Warbling Vireos in their sheer, beautiousness.”

It was a busy time, and it took a while for my mental processor to register the comparison to our Warbling Vireo. Our Warbling Vireo is a dull gray bird with no distinguishing characteristics except its musical warble. Then I checked my European bird guide, which describes the Garden Warbler as “Anonymous appearance ... with no obvious features.”


The Brits take their birds seriously. Even so (their testiness not withstanding) common European birds are a rather dull lot. I had a pair of Brits (not British birders) stay with me. They were charmed by the chickadees at the bird table, stunned by the sartorial splendor of the Blue Jays, and departed speechless when a male Northern Cardinal visited on their last morning, all experiences nearly unknown on the other side of the pond.

Even so, I can imagine some readers might be saying that in today’s world we Americans have few friends, so we ought not insult the ones we do have. “Dear British friends,” they might say, “we have our share of dull, brown, nondescript sparrows and finches.”

And yes, we do have lots of little little brown birds which are often difficult to tell apart. I watched them at my feeders as I ate breakfast, a milling mass scratching the ground and covering the feeders. There were juveniles in the mix, and many of them lack the handsomeness that characterizes the adults. The plumage of adults is worn from a summer of child-rearing and has lost its crispness, but this is also a defensive tactic designed to camouflage them from predators during the winter ahead.

Most of the sparrows and finches have been around all summer, but the migrants are also beginning to make their appearance. Generally, they move in fits and starts, and no further than is necessary to get plenty of food, either for further flight or against the cold. They are opportunistic foragers drawn to the bounty of bird feeders. They hang around, and so give us a good opportunity to study them, distinguish them, and enjoy their variety. With a good bird guide nearby, late September through mid-November is a perfect time to dispel the notion that all sparrows and finches are dull brown birds that look alike.

Here is a quick run-through of the most common “little brown birds” which frequent my feeders during the Fall.

Lining the perches of the sunflower feeder are Purple Finches. The females are plain, dull streaky brown and white birds, but the males still sport their wine red plumage, though it is faded. Occasionally an even duller brown, more finely streaked female House Finch will appear, perhaps with a faded red male, but these are more common in the towns.

Littering the ground and blending in with the fading green grass are American Goldfinches. An occasional male still shows some remains of his sunburst-yellow breeding plumage, but most - males, females and juveniles - are in their drab olive green plumage. They are so well camouflaged on the ground that I am often unaware of how many there are until they burst into flight. The finches - gold, purple, and house - may be “dull” this time of year, but in breeding plumage the males are stunning.

Chipping Sparrows use the bird feeders. Adults have the deep brownish red cap outlined by a white eye stripe and with a dark line through the eye. Necks and chest are white, fading to gray along the sides. Juveniles are plainer, with only hints of the red cap and white stripe, but they are usually present with adults and size and shape all say, “Chippy.”

On the ground, seven species of sparrows are often scratching for food. The common Song Sparrow,  often referred to as the “default sparrow,” has bold brown streaking on a white breast, often with a prominent brown “stick pin” in the middle of its breast. Uncommon at the feeders is the slimmer Savannah Sparrow. Compared to the Song Sparrow, the Savannah Sparrow is usually paler, more finely streaked, lacks the “stick pin,” sometimes has some yellow in front of the eye, and has a notched tail.

The White-throated Sparrow is a bit larger, often has yellow spots in front of the eyes (very faded in the Fall and Winter) and a white throat. It has moved down from the higher elevations where it nests, and some will stay all winter if there is food available.


Juvenile White-crowned Sparrows usually appear in mid-October, migrating from the north of Canada. These juveniles can be confused with the American Tree Sparrow (which doesn’t show up until November); the tree sparrow also has an unstreaked breast and buffy sides, but it sports a “stick pin” in the middle of its breast. The young White-crowned Sparrow has brownish and buffy head stripes which hint at the bold black and white stripes of the slim and handsome adults.

Dark-eyed Juncos, gray and white “snow birds” come down from the mountains and are gathering in their nomadic flocks for the Winter. There is great variation in the shades of gray on the juncos, ranging from near black to very pale gray. Occasionally the western race with rusty sides, known as “Oregon Juncos,” will appear in our neighborhoods as well.


In late October, the large, deeply rufous-colored Fox Sparrow can be expected. It looks like an especially robust and handsome Song Sparrow.

Becoming familiar with these common sparrows will also enable you to pick up the rare vagrant that will make you the envy of the local birding community. Some years ago an observer in Putney noticed a “mutant” sparrow among the half dozen species feeding outside of his living room window. It was a juvenile Harris’ Sparrow and was only the second confirmed sighting of this species in Vermont.

The little brown birds that frequent our feeders are dull and drab only when we are bored and inattentive. They great variety and give us lots of opportunities to hone our observational skills.
1 comments - add your comment

Friday yielded another large flight of Broad-winged Hawks over Putney Mountain, resulting in a total site count 45-50% greater than any previous year (at least according to my unofficial records).

Here's a sampling of images from the day.

Other hawks were also on the move, including this low flying Sharp-shinned Hawk ...

Some of the hawks were low enough to be easily seen. They provided many moments of excitement for the students who came to the ridge for an outdoor classroom.

With so many hawks overhead, including some hungry accipters, this Northern Flicker headed for deeper cover ...

End of the Breeding Season?

Has the end of the breeding season finally come? Good question!

What I do know for certain, is that some birds are just completing their parental responsibility. This afternoon a pair of Northern Cardinals came to the backyard with a fledgling, providing me with the opportunity for this series of photos ... 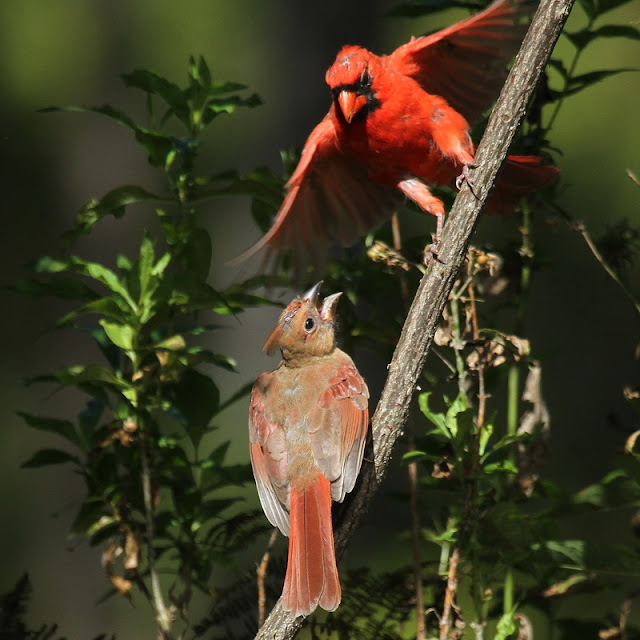 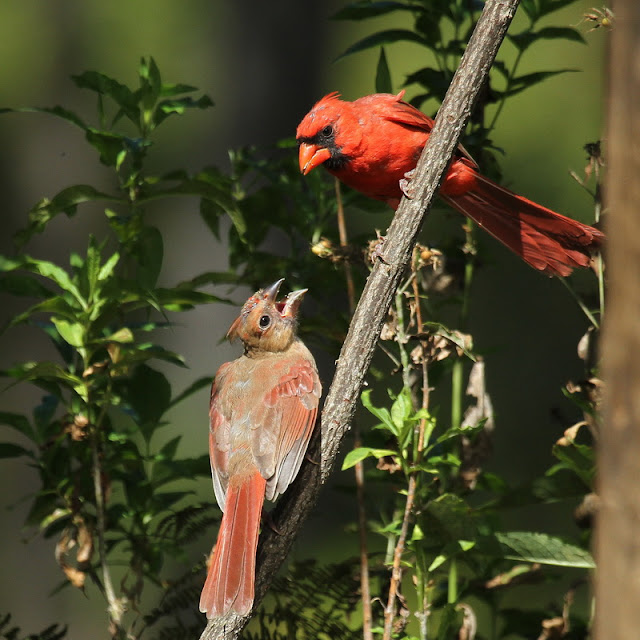 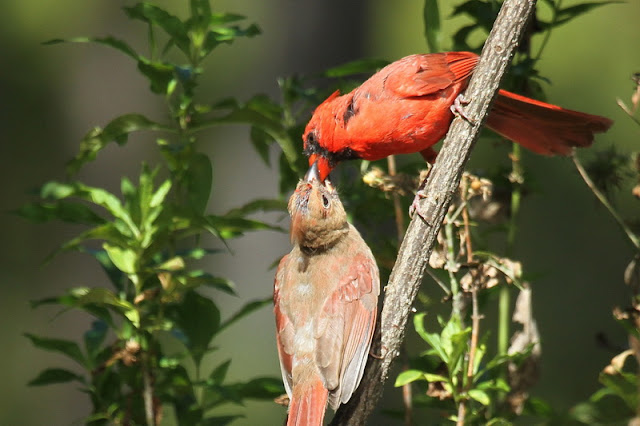 I was unable to get to Putney Mountain today. But yesterday, a young Red-tailed Hawk showed its prowess when it tucked its wings and dove below the ridge. Shortly after, it circled over the valley, carrying the fruits of a success hunt. When not being buzzed by a Sharp-shinned Hawk, it fed on the wing.

The hawk flight this afternoon was fairly quiet until a Merlin went on the attack - shattering the somnolence of the watchers and creating a buzz which lasted long after it disappeared over the ridge ...

Plus ... a sampling of other images from the last two days ...

Flight of the Broadies - Putney Mtn

Wednesday, September 12, was a banner day for Broad-winged Hawk flight on Putney Mountain with over 1400 birds having been counted by the time I had to leave at 4:00pm.

Kettles of 20 t0 250 birds rose out of the Connecticut River Valley. The birds were often just distant the specks, but their numbers made it look as if Zeus sprinkling pepper from a pepper shaker, spicing up his afternoon meal, and certainly spicing the sky for the hawk watchers.

A few Broad-wings even came over at eye level. Blue sky and bright sun then provided some good photo opportunities ...


Turkey Vultures wander up and down the ridge, but it is much too early for them to be counted. This one drifted over the ridge, occasionally doing a lazy wing adjustment and providing a different view of this familiar big black bird ...

Putney Mountain Hawk Watch also counts Blue Jays, in part because they move early before the hawks have taken to the wing ...

A day of superb birding! Hope you have a good one today!
0 comments - add your comment

Hawk migration is underway on Putney Mountain, Vermont. Today was one of the best early dates for the hawk watch with over 600 birds counted by the time I had to leave at 4pm - a good movement of Broad-winged Hawks, 9 Bald Eagles, Sharp-shinned and Cooper's Hawks, a single Osprey, American Kestrels, roaming Turkey Vultures (not in the count) and some resident Red-tailed Hawks (not in the count).

Among the few keeper photos are a juvenile Red-tailed Hawk and the Osprey ...

Butterflies were also active on this delightful, sunny day. A good count of Monarchs was tallied. Among other butterflies common today were the American Copper and Orange Sulphur ...

Cape May - Terns, Butterflies, and Dragonflies

While visiting family in Philadelphia, I managed a day trip to Cape May. I was about a week early for warbler, song bird, and hawk migration. But in places I felt like I was in the middle of a butterfly garden. And ... in a continuing expansion of subject and interest, dragonflies captured my focus. Here is a sampling of images from the day ...

Terns, oystercatchers, and skimmers were gathered along the beaches near the conservancy. A particular delight were the Royal Terns ...

A dozen species of butterflies were tallied. The most stunning was this Red-spotted Purple ...

I am a novice with dragonflies, so please let me know if you disagree with the IDs on the following ...