A trip this week to Brunswick, Maine, provided my first opportunity to photograph Long-tailed Ducks. A pair was close to the rocky shore and we could see the "purpose" of the drake's long tail feathers. As the hen followed him, he wagged his long tail ...


It was an impressive display, and one that enabled the hen to assess his qualities as a mate.

She must have been impressed. When he flew, she followed ...


A morning of birding at Florida Lake in Freeport yielded many early migrant songbirds, highlighted by Palm Warblers ...


Migration is concluded for Tree Swallows; they were consumed with courtship and the swallow equivalent of foreplay ...

Snow still lingers behind the barn and redpolls have made the occasional visit to the feeders in the last few days ... 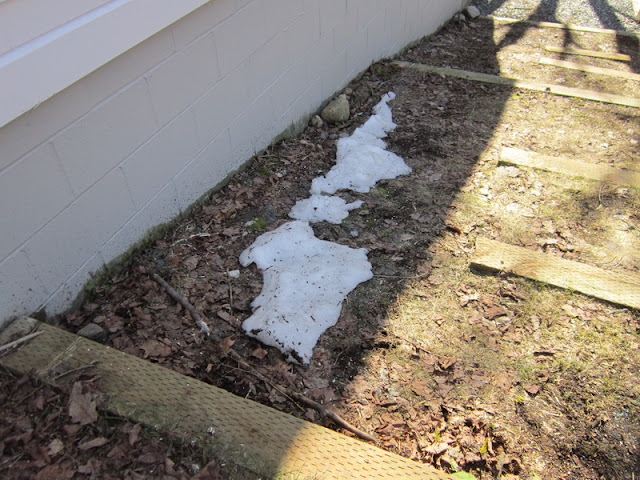 ... but otherwise, all signs point to the arrival of Spring. The Chipping Sparrows are doing vocal battle in the morning, and the "peter, peter, peter" of the Tufted Titmouse proclaims his jealous watch over his territory ...


In the garden, crocus draw in the honey bees ... No one needed to "plan" a birders' walk at Herrick's Cove this morning; it just happened as we  welcome the vanguard of the season's migrants and anxiously await the next wave. Among those recent arrivals today were the Yellow-rumped Warblers in splendid breeding attire and Ruby-crowned Kinglets flashing their crown ...


In many wetlands, the geese are well beyond the courtship stage, as this incubating goose attests, her nest perched atop a beaver lodge in Putney's Wilson Wetlands.

Take your pick - snow, sleet, freezing rain, rain - we have it all today as winter just refuses to let go of Vermont and New England.

But the birds are moving anyway, and there has been more activity in the yard and around the feeders than I have seen for months.

Highlight has to be the Fox Sparrow - two have been scratching the ground - very welcome visitors who usually stop on the way north (or south). On their recent travels, I have missed them ...


A mixed flock of blackbirds (red-wings, grackles, cowbirds) occasionally do a bit of displaying between frantic eating. Spring is the one time of the year when birders are half glad to see the Brown-headed Cowbird, though on a semi-winter spring day, this birder is mainly glad to be inside ...


Dark-eyed Juncos are moving in a very serious way - the flock around the feeders and yard must be in the 200-300+ range ...


... and finally, FOY Purple Finches. The blackbirds are chasing the boys from the ground and platform, leaving only the high hanging sunflower feeder. Photo is through door window and storm section, but that helps capture is misery of the day ...


Good birding, all things considered ... but better birding is on the way!
2 comments - add your comment

I'm back home in Vermont where winter is still hanging on. The snow pack in the yard is retreating, but every so slowly.

Even so, today there was a feel of Spring which sent me down along the Connecticut River. The ice is still not out of the Retreat Meadows waters, but it is receding.

Few of the small birds have ventured this far north yet, but ducks are passing through, including one of my favorites ... the handsome and dapper Ring-necked Duck.

The name is often a puzzlement to modern birders, because we hunt them with binoculars, not with shotguns as did the reputable ornithologists of previous generations. So we don't get to see the "ring" on the neck. 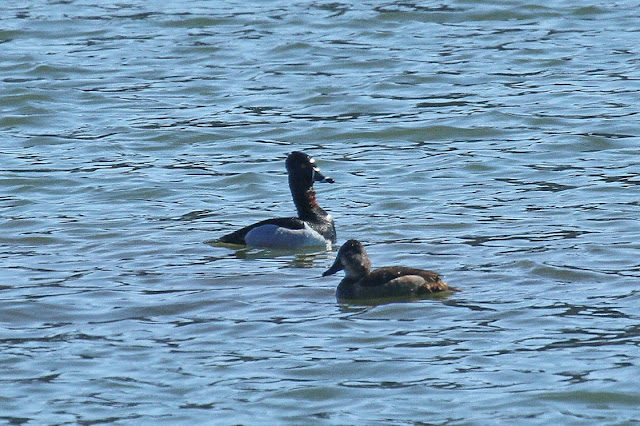 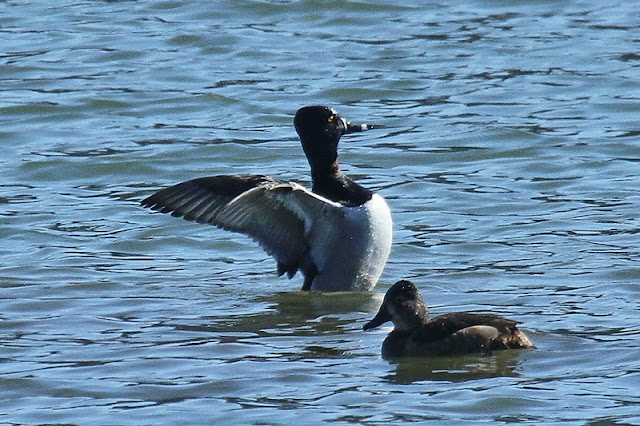 And ... a few additional shots of this diving duck and its pitter-patter means of getting airborne ... 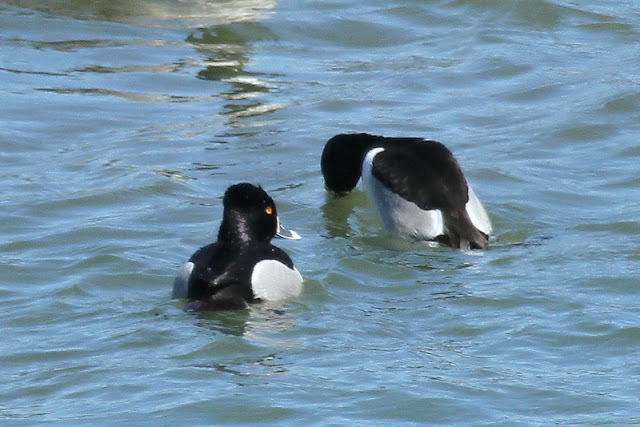 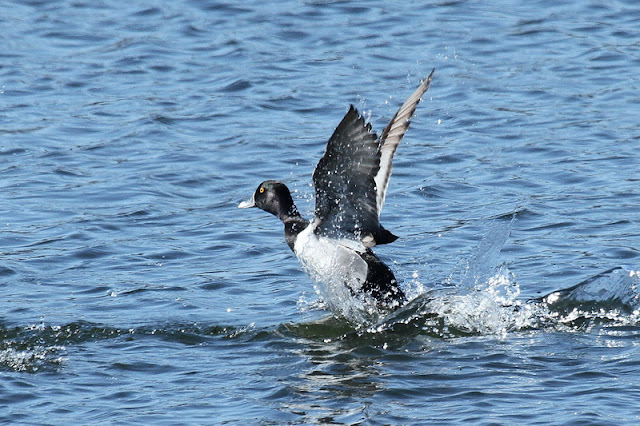 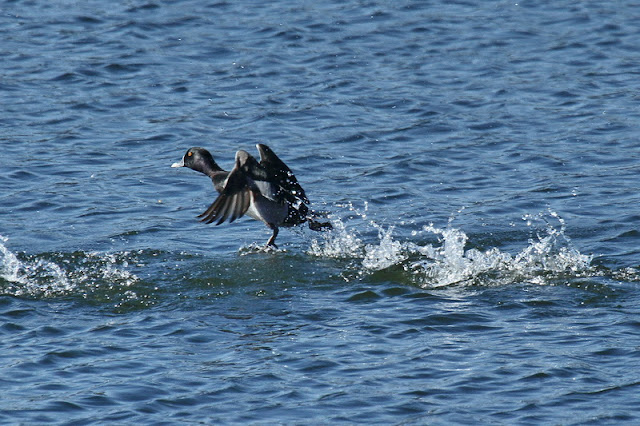 The Winged Tiger in Our Woods

The out-of-doors can be a dangerous place for all manner of animals. A house cat out-of-doors is a predator. A recent study has significantly raised the estimate of carnage from outdoor cats; they are the leading cause of death among both birds and mammals in the United States, killing 1.4 billion to 3.7 billion birds each year. A beloved house cat sometimes brags of its prowess by depositing a carcass at the feet of its owner (or cat servant). Sometimes the cat lover will complain about the carcass, but rarely about the unseen toll that the out-of-doors cat may take on other wildlife.

However, fair is fair. Out-of-doors, the distinction between predator and prey is rarely a firm distinction. Beloved domesticated kitty and untamed wild animal means nothing when they all roam, unleashed through the woods, shrubs and fields. Predator may become prey. The predatory house cat may be preyed upon, and not return home come morning.

I was tempted to interrupt the woman whose quavering voice lamented the loss of her beloved tom and tell her that beloved kitties are not killed by fishers if they are kept indoors. I did not say that to her. I say it now to all cat owners. Your outdoor cat is a predator. It is also fair prey. Keep it inside. End of sermon.

Pound for pound and ounce for ounce, the fisher may be the most formidable four legged predator in our woods, quite capable of killing an animal larger than itself, including tame pussy cats and of holding off, or even taking down, most slobbering house dogs. However, I suspect the fisher takes the blame for more house cat disappearances than it deserves. The true tiger in our woods is not fur bearing, but feathered - a stealth hunter.

Bubo virginianus - The Great Horned Owl. One of the folk names for the Great Horned Owl is Cat Owl. When food is short, wrote Edward Forbush, the Massachusetts ornithologist, “the owl will attack even the domestic cat, and usually with success.”

The Great Horned Owl is our most widespread owl, found throughout North and South America, and adapted to a wide variety of habitats.  “Powerful” and “dangerous” are the adjectives most frequently used by writers from the early nineteenth to the early twenty-first centuries to describe this bird. John James Audubon knew it as one of the most common species along the shores of the Ohio and Mississippi  Rivers. “The Great Horned Owl,” Audubon wrote, “lives retired, and it is seldom that more than one is found in the neighbourhood of a farm, after the breeding season; but as almost every detached farm is visited by one of these dangerous and powerful marauders, it may be said to be abundant. The havoc which it commits is very great. I have known a plantation almost stripped of the whole of the poultry raised upon it during spring, by one of these daring foes of the feathered race, in the course of the ensuing winter.”

The Great Horned Owl may have an equal in the Western Hemisphere as a predator, but it has no superior. And in our neighborhoods, it has no superior. The imperial looking Bald Eagle doesn’t begin to compare as a predator. Our national symbol is quite content to feed on a deer carcass (something a Great Horned would never do), or steal fish from an osprey. The Bald Eagle is an adept fish hawk. When necessary, it is capable of taking the similarly sized Canada Goose. But the Great Horned Owl can also take the Canada Goose is spite of the goose weighing three times as much as the owl. It may take a Wild Turkey which can weigh even more than the goose. And, the Great Horned has been observed driving the Bald Eagle away from its aerie and appropriating the nest for its own use.  Again, quoting Forbush: “The Great Horned Owl is no respecter of persons. It kills weaker owls from the Barred Owl down, most of the hawks and such nocturnal animals as weasels and minks.”  In Texas during a three night period, a Great Horned took a Cattle Egret, a Great Blue Heron, and a gray fox.

The Great Horned Owl has many enemies that hate him, but none that are dangerous, except for humans. It has earned the particular enmity of the crow. And for good reason - its depredations among the crow population can be prodigious. It will take old and young crows from the nest at night and during the winter will pick crows off of their night roosts. It is crows that will most often give away the Great Horn’s presence during the day. When you see crows noisily flying around the top of a tree, it is quite likely that they are mobbing their most dangerous enemy. Eventually the crows’  harassment may stir the desultory owl into flight; as it leisurely flies off, the crows continue their uproarious pursuit.  Pete Dunne writes: “Absolutely hated by crows, who amuse themselves by gathering around roosting owls and haranguing them with a gritty vehemence they inflict on no other enemy.” Except - there is nothing amusing about the crows’ actions. The presence of the Great Horned Owl is a mortal danger to the crows. The crows may be courageous and bold during the day, but when night descends they cede any advantage they might have to the powerful stealth hunter of the night.

One January day in Arizona, I saw three Great Horned Owls. I was with people who knew where they roosted.  They led the way through the desert to a copse near a watering hole where we searched the bare trees for the owl. Its appearance as it perched on the limb conveyed a somnolent disregard for us, or perhaps a haughty arrogance. But as it turned its head and blinked in my direction I felt a sleepy malice in his stare. I was glad that I was too big to be in danger from this winged tiger. At least, I think I was too big.