For the last few weeks, Blue Jays have been "uncharacteristically" quiet as they come to the feeders, gather seeds, and leave. They have been nest building, incubating, and feeding nestlings. They are intelligent corvids, and they know not to draw attention to themselves during this vulnerable time. I have been waiting for the jolly raucousness to return, along with fledglings demanding to be fed. That happened this morning, as young swarmed through the trees, begging loudly and and chasing after parents when they did not get their way immediately ...

The first fledgling Evening Grosbeak was fed in our backyard on June 9 ...


... since that day, the young have been brought around for food and self-feeding instruction on a regular basis ...

Additional members of the Next Generation which we have helped to raise include ...


... and finally ... the Cedar Waxwings are getting down to the business of the season. This pair copulated on the branch while I went for my camera. When I finally focused on them, they had happy smiles, then flew off. 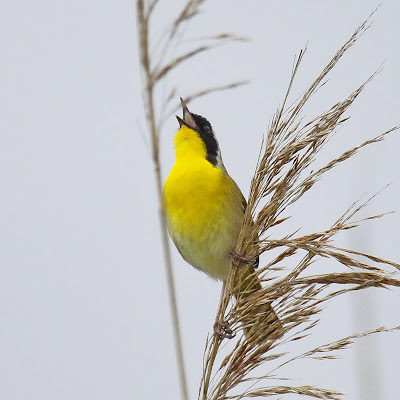 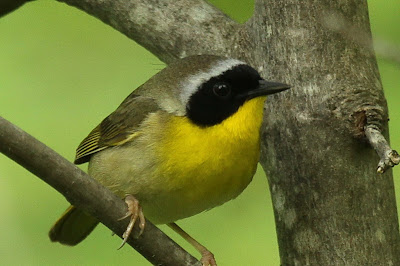 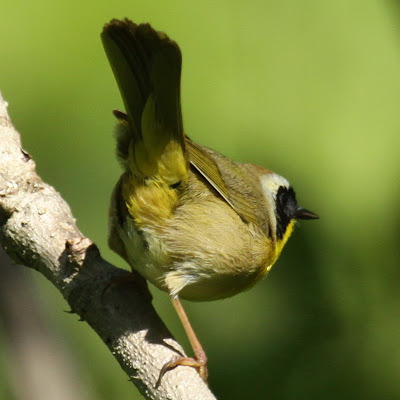 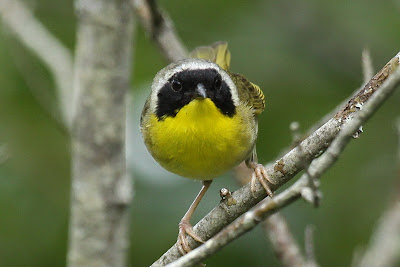 The birding is always good when the Common Yellowthroat is around.
2 comments - add your comment

I remember the early 80s when Osprey hack boxes were set up to help reestablish this species after the devastating effect of DDT. Now, 30 years later, reaction by some to the presence of this magnificent bird is almost ho-hum because they have become so common in appropriate habitats.

At Brigantine there are nesting platforms all along the loop road. I did not start counting how any were occupied until well along the drive, but the number was at least 6-10.

This nest I have watched over a number of years from when it was first put up and a "young couple" began keeping house. They have nested successfully ever since. Here, Mom feeds her young, while Dad keeps watch.


After feeding the chicks, she took flight, but not to forage for more food. Apparently, she felt the house needed some additional work, and she returned with a stick.


Still not satisfied with the home decor, she made two more trips across the marsh for nesting material ...


Dad watched the kids, but left the home improvement entirely to Mom - a mother's work is never done!


The recent day trip to Brigantine yielded my first photos of the Gull-billed Tern, a regular but uncommon summer resident in Forsythe NWR ...

Forster's Terns were not very cooperative as they fished the channels, usually choosing to give me backlight or their backside, but this one grabbed a worm out of the mud and I grabbed a photo ...

The bubbling energy of wrens always engages me, none more so than the Marsh Wren. Notice that this one is wearing jewelry ...


Wrens are "troglodytes" - cave dwellers. There were at least two newly made "caves" in the vicinity of the singing male ...

I wonder why this hen Mallard had only one duckling following her. Did her eggs not hatch? Had a predator taken eggs? Or had predators taken the young ducklings?

Willets are common nesting shorebirds along the coast, their "pee-will-willet" carrying over the marsh grasses ...

In a post early this spring, I said that one goal for this season was to capture the Red-winged Blackbird showing his epaulets in all their glory. This gentleman cooperated magnificently ...

We've been in the Philadelphia area; when the weather cleared this week we made a trip to Brigantine unit, Forsythe NWR. Though rather hazy through the morning, there was good birding with the breeding summer residents.

In spring and summer, I always hear Clapper Rails along the Jersey shore but I do not always get a sighting. The rails "tek-ked" in many places in the salt marshes. The ebbing tide and patience finally yielded this individual as it crossed a muddy opening.

Long minutes were spent watching this Black-crowned Night Heron as it foraged for what appeared to be some kind of mud worm (sorry - still learning the birds, much less what they are finding to eat) ...


Additional waders - common, but I never tire of watching them or photographing them.  The Great Egret shows the breeding plumage which the "feather trade" craved and which nearly drove it to extinction. Thankfully it has rebounded wonderfully.

I have not been out much. We had the house painted, and there has bee much to do getting the house put back together post painting, plus post-Irene yard work, and unstable weather. But this morning I got out for a couple of hours.

I begin with the end of the morning when breakfast was being delivered. This crow iscarrying food; it appears to be a frog or toad. The young have probably fledged, and there was one flying hurriedly behind this parent ...


Just a sampling of additional images ...


More Tails of Birding:
Birdwatching, Familiar Birds, Biology, and the Men Who God Us Started. 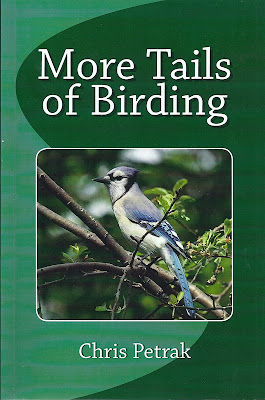 "When the weather turns foul, birdwatcher and writer Chris Petrak pursues birds in his study, feathering his observations with those who have put pen to paper: the ornithologist, naturalist, storyteller, folklorist, lexicographer, poet. He distills these many resources into entertaining and informative essays for readers in Vermont and bloggers around the world. In this second collection of his writing, he reflects on birdwatching, provides engaging accounts on familiar birds, gives us glimpses at their amazing biology, and tells us about the men who pioneered ornithology and birdwatching in North America. Also an accomplished photographer, chapters are richly illustrated with his black and white photographs. More Tails of Birding will delight both the backyard bird watcher and the experienced birder."

Email ThisBlogThis!Share to TwitterShare to FacebookShare to Pinterest
Posted by Chris Petrak at 7:10 AM
Newer Posts Older Posts Home
Subscribe to: Posts (Atom)