The weather in the Northeast has been gruesome, and I have been pretty much confined indoors. But I feel like I need to get back into the regular groove of posting.

So I am doing in a series of photos from last year - random, and obviously not just birds and things with wings.

I will be back to my main theme soon.

Email ThisBlogThis!Share to TwitterShare to FacebookShare to Pinterest
Posted by Chris Petrak at 6:00 AM
Labels: Song Sparrow, Wood Duck

The weather in the Northeast has been gruesome, and I have been pretty much confined indoors. But I feel like I need to get back into the regular groove of posting.

So I am doing in a series of photos from last year - random, and obviously not just birds and things with wings.

I will be back to my main theme soon.

There has been lots of excitement in my neighborhoods about the presence of northern owls in the Northeast, mid-Atlantic, and elsewhere. Here are a few images of the birds that are creating all of the interest. 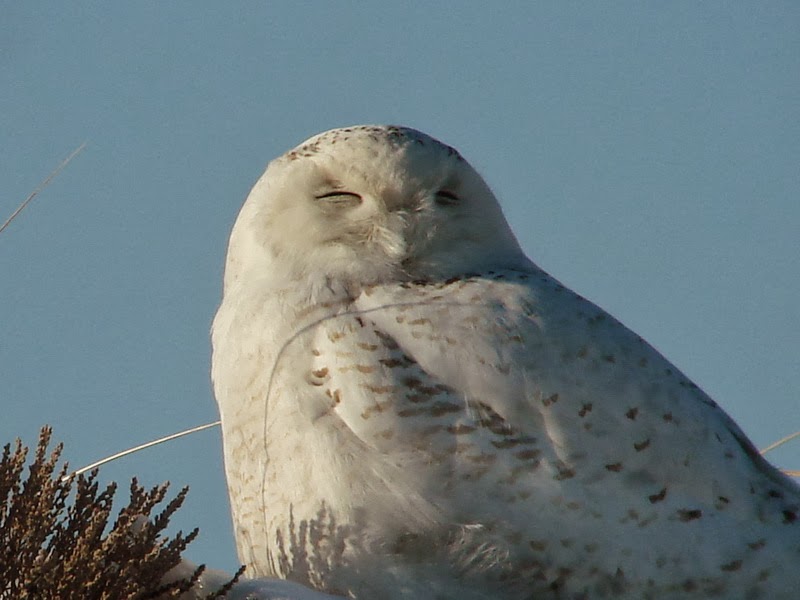 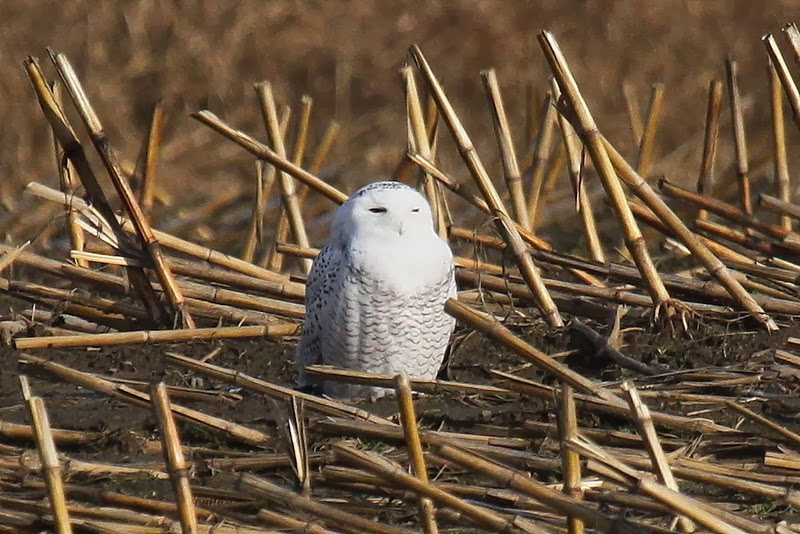 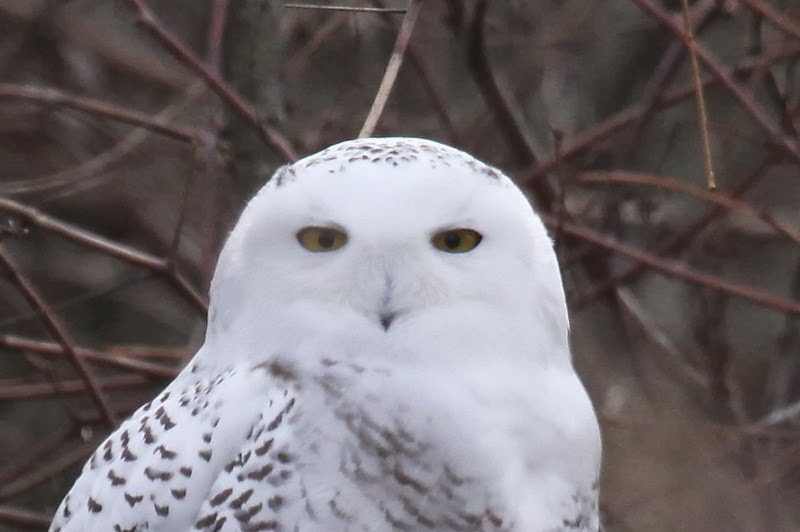 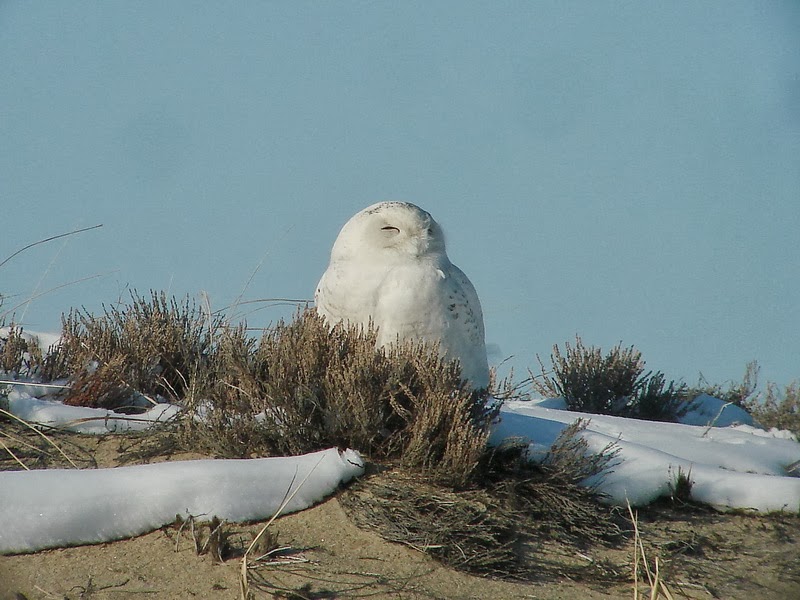 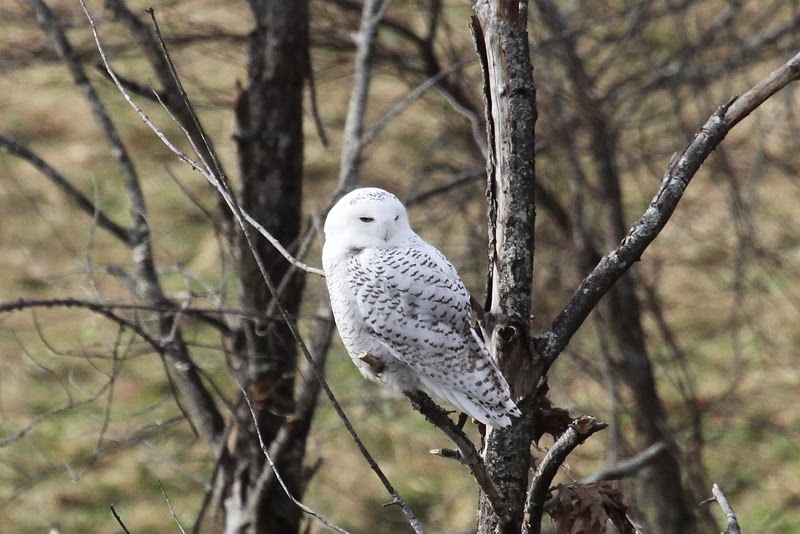 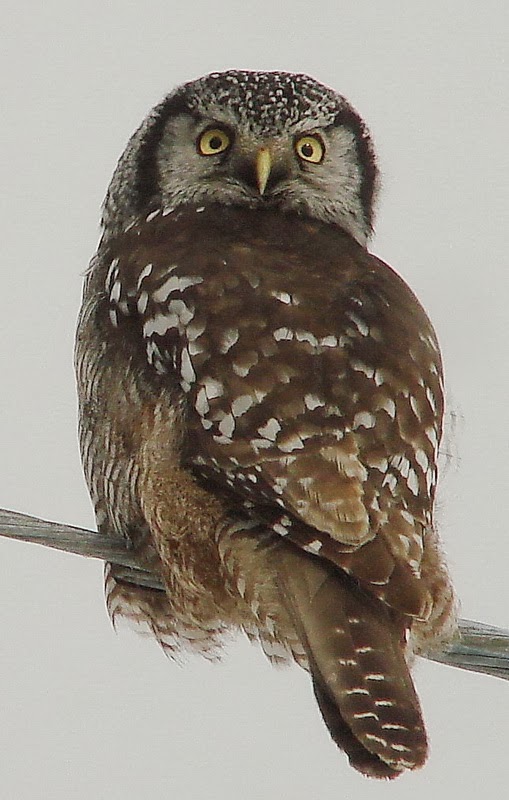 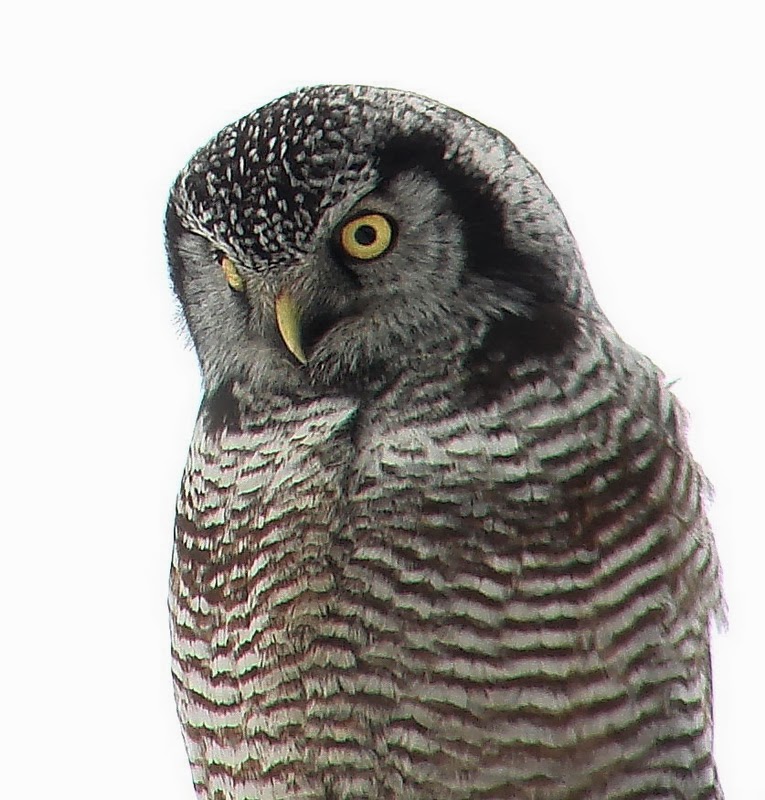 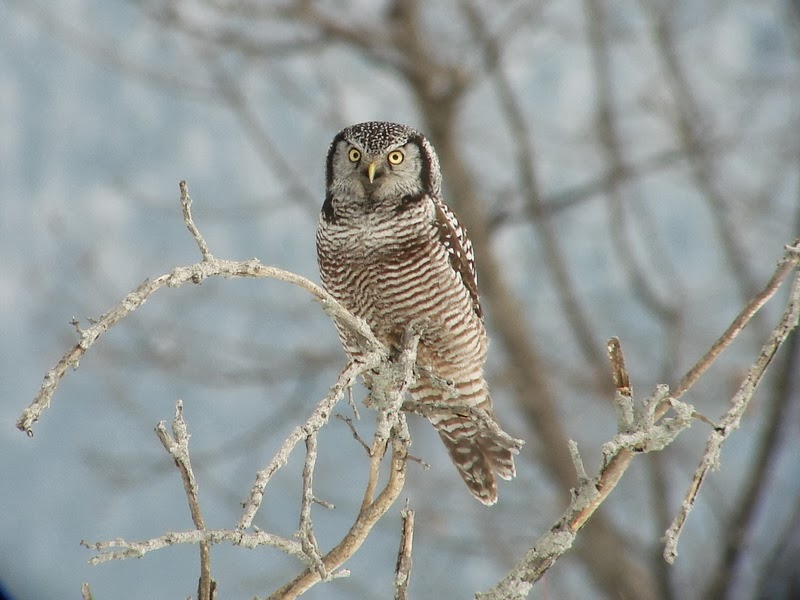 Email ThisBlogThis!Share to TwitterShare to FacebookShare to Pinterest
Posted by Chris Petrak at 10:31 AM
Labels: Northern Hawk Owl, Snowy Owl

Bird calls are very difficult to distinguish. Most are some form of “chip,” which sounds like every other “chip” to anyone who does not have an auditory acuity, a great memory, and lots of experience.

However, there is one “chip” that I recognize almost all the time and wherever I am. It is a “chip” - or as some render it, “tchip” - that I hear from my feeders when the sky is just beginning to lighten in the morning. I hear the “tchip” in the evening as the last light is fading. I hear it on sultry summer evenings, on promising spring mornings, and wintry days when snow quickly deepens or frigid winds howl. I poured my first cup of coffee this morning, cupping the mug to warm my hands. Through the thermal paned kitchen window I heard the familiar “tchip” and could just make out the crested figure hopping over the frosted grass. 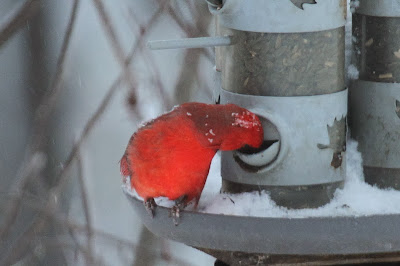 First in the morning, last in the evening, frequent through the day when weather is foul or young fledglings need easy foraging, the Northern Cardinal is a bright splash of cheerful red during every season of the year. He is a welcomed presence at every backyard feeder. The cardinal would probably lead a poll which asked people to name their favorite bird. When people report cardinals at the feeders, they do so with underlying satisfaction. When the cardinals are absent there is a sense that a small, but important, pleasure in life is being withheld - as though one’s favorite glass of wine could no longer be sipped.

The male cardinal sports the bright red. The female is a rich golden brown with splashes of red and the characteristic cardinal crest, a beautiful bird in her own right. But it is the male that draws the attention. He stands out against the white snow, when singing on a budding spring branch, when dashing about in summer to feed his young. When you see a cardinal, you know, almost immediately, that it is a cardinal.


The only other bright red bird that we might expect to see in our New England states is the Scarlet Tanager; he is bright red with black wings. But the Scarlet Tanager is a tropical species that is only present during the late spring and summer, and stays pretty much in the mature forest. He is not a backyard feeder bird.

The presence of the Northern Cardinal in Vermont is a rather recent occurrence. John James Audubon reported the “cardinal grosbeak” as “very abundant in all our Southern States ....They are found in the maritime districts of Pennsylvania and New Jersey, where they breed, and where a few remain the whole year; some are also seen in the State of New York, and now and then a straggler proceeds into Massachusetts.”

The Massachusetts ornithologist, Edward Forbush, knew the cardinal as a year-round resident in the vicinity of New York City, but he basically regarded it as an abundant southern species, and his account is rather limited. 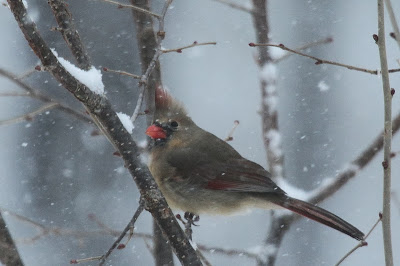 The “Life History” of the cardinal by Alfred Cleveland Bent, published in 1968, begins: “As we travel southward from New England’s ice and snow to meet spring halfway, we are greeted by the loud “peto, peto” of the tufted titmouse, the lively, striking song of the Carolina wren, and the rich, whistling notes of the cardinal redbird, three birds we rarely see in New England. They seem to be welcoming us to the land of sunshine and flowers, and their music brings a heart-warming change from the bleak and silent woods we have left behind.”

Forty years later, these three southern species to which Bent referred are all present in most of our Vermont neighborhoods throughout the year. We no longer have to travel south during the ice and snow to enjoy the Tufted Titmouse, Carolina Wren (the least common of the three) or the Northern Cardinal. The cardinal is undoubtedly the favorite of the three.

The cardinal has been extending its range into the snowbelt. Toward the west, it can now be found in western Nebraska and Kansas, and sometimes into Montana and southern Alberta. It lives year-round in central Minnesota and Wisconsin, southern Ontario and on into Maine. In 2006 and 2007, the Christmas Bird Count north of Minnesota in Ontario recorded cardinals for the first time. 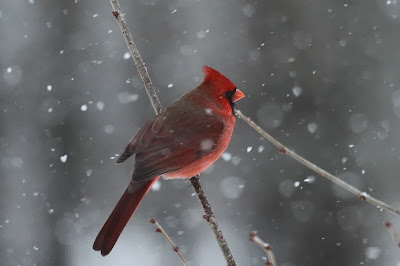 Audubon found “a great number” of cardinals “as far up on the Ohio as the city of Cincinnati.” For the last several years, the middle of Ohio (well north of Cincinnati) has been, in the words of “Birder’s World,” the “cardinal capital of the world.” One Christmas Bird Count last year counted a record 3,045 Northern Cardinals in the fifteen mile diameter count circle.

The authors of the Northern Cardinal monograph in “Birds of North America” cite three reasons for why the cardinal has extended its range and is thriving in northern winters. First, warming climate means less snow depth and easier foraging. It also means that less food is needed to stay warm. 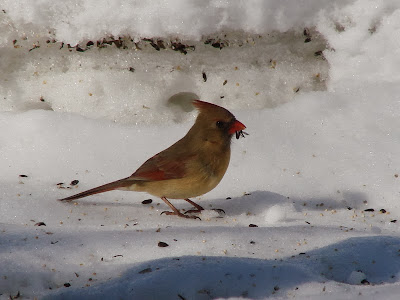 Finally, well-stocked bird feeders in winter: in the truly foul weather, when the snow pack is deep and the temperatures are low, backyard bird feeders provide easily attained food for generating the body energy needed to stay warm and survive. Many experts credit bird feeders for enabling cardinals to expand their range into the hostile winter climes.

The Northern Cardinal is most abundant in our southern states, but in accord with its common name, it is moving northward. Indeed, it has become an icon of the December holidays and the northern winters: the bright red cardinal on a white, snow covered branch - or resting among the needles of an evergreen tree - or on perched among pine boughs amid holly berries. Forbush put it this way: “when in winter a thick carpet of snow lies on the ground, its plumage seems to shine with unusual brilliancy in the reflected light from the snow and it stands out in marked contrast to the wintry background.” 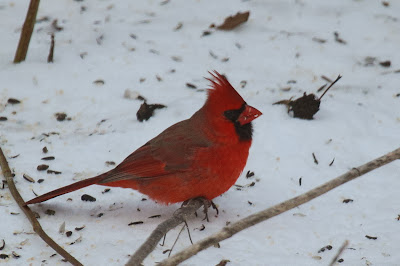 The cardinal in winter is an assurance of good birding.
1 comments - add your comment

Email ThisBlogThis!Share to TwitterShare to FacebookShare to Pinterest
Posted by Chris Petrak at 6:00 AM
Labels: Northern Cardinal

I have been unable to get free to pursue any of the Snowy Owls which have irrupted into the Northeast this winter. In fact, yesterday's winter nor'easter with its foot of snow precluded almost all venturing beyond the warm walls of the house.

That's okay, because there has been plenty to do just watching the birds in the back yard. There has been no winter finch presence this winter, but the variety of sparrows has been notable. Juncos are always present in numbers, but this year several American Tree Sparrows have been regular, as have White-throated Sparrows. The White-crowned Sparrow first seen in early December continues.

Best of all has been the Fox Sparrow. Probably my favorite sparrow, it generally makes brief stops during Spring and Fall migration. For the first few days, it kept to the brushy edge of the yard, but as the snow has continue to accumulate it has moved into the open ...


... and yesterday, it became a true "feeder" bird, scratching seeds on the platform feeder, and as the photo shows, un-intimitated by the much larger Mourning Doves which crowd the platform, and often chasing off juncos, goldfinches, white-throats, and even Blue Jays ...

Chickadees are unfazed by all the visiting "snow birds," always finding a free feeder somewhere to grab a seed, then head to a branch to pound it open ...

Good birding in the year ahead!