The Brattleboro Area Christmas Bird Count was held on December 19 (takes me a while to get caught up with things).

Richard Foye and I again did the Dummerston route. Our highlight was a Northern Shrike, the only one seen in the Brattleboro area this year. Great look, but took off almost as soon as the camera came out, so only so-so documentation.


Highlight of he entire count and within our route area was a Townsends Solitaire, a western species decidedly out of range. It was first spotted in early December by Cate Abbott at her home at the end of a remote dirt road in a remote part of Dummerston. Richard and I were unable to find her property on count day, but she saw it two days prior (just before flying off somewhere for the holidays) and in the count week, so it counts. This was the 4th record for Vermont. The remoteness of the location where it was seen suggests to me that there are probably a lot of other rarities lurking in the sparsely settled regions of Vermont that go unseen and unreported.


Finally, after a day in the field, we all gather at Hollie Bowen's home for the compilation potluck. Most of the counters clean up pretty nicely for the evening affair .

Email ThisBlogThis!Share to TwitterShare to FacebookShare to Pinterest
Posted by Chris Petrak at 9:56 AM
Labels: Northern Shrike, Townsend's Solitaire 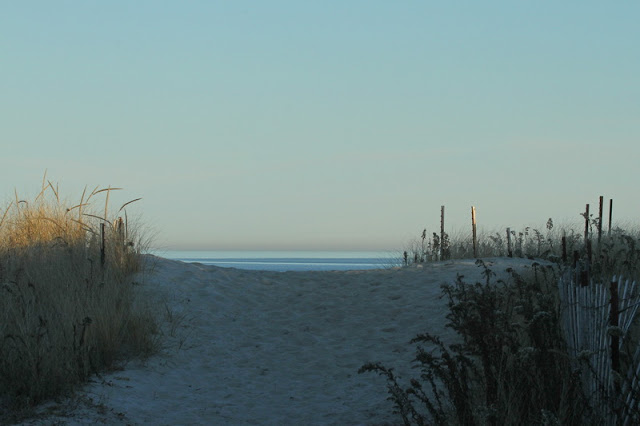 Email ThisBlogThis!Share to TwitterShare to FacebookShare to Pinterest
Posted by Chris Petrak at 6:00 AM
Labels: Common Eider, Harlequin Duck, Sanderling

Some additional images from this week's day trip to Cape Ann, Massachusetts. 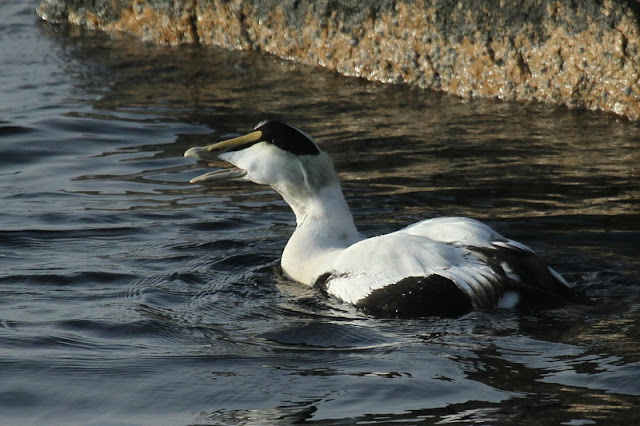 And finally ... probably my favorite photo of the day ...ds

Buffleheads are one of our smallest ducks. Their general appearance and demeanor suggests sweetness. Don't be deceived. When it comes to the all important task of transmitting genes, the boys are as aggressive as any in trying to impress the girls and intimidate the other boys. Often multiple boys will be trying to impress and win over one girl in what we would call in human terms as sexual harassment.

And this final photo seems to show one guy gloating over his victory while his rival dives for safety. However, I prefer the caption, coming from the guy on the left: "Well, kiss my a**!" 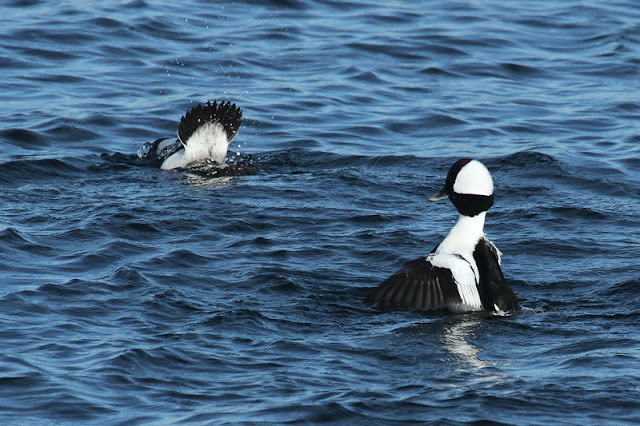 Email ThisBlogThis!Share to TwitterShare to FacebookShare to Pinterest
Posted by Chris Petrak at 6:00 AM
Labels: Bufflehead

I finally got to the Massachusetts coast for a day of birding around Cape Ann. Highlight was definitely the courting Red-breasted Mergansers and Buffleheads. (Also saw some Common Goldeneyes, but they were at a distance.) Waterfowl do their pairing on wintering grounds, for the most part, but the girls seems finicky; I have seen it throughout the winter months. Nevertheless, fun to watch.

First the Red-breasted Mergansers, who occasionally seemed paired, but don't believe it. The boys are all busy boasting their prowess. 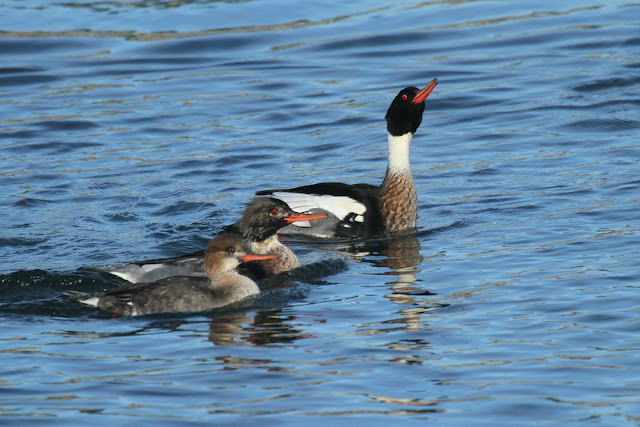 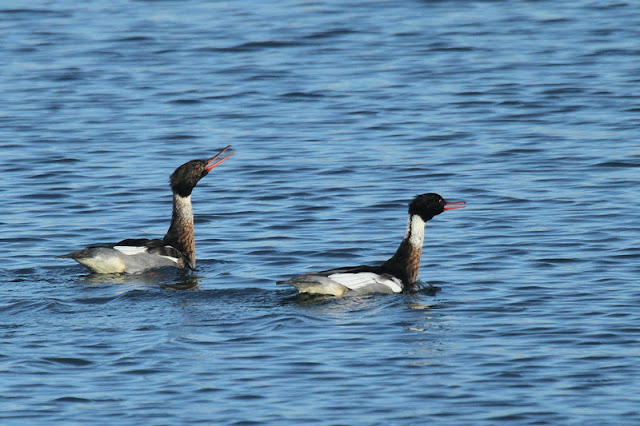 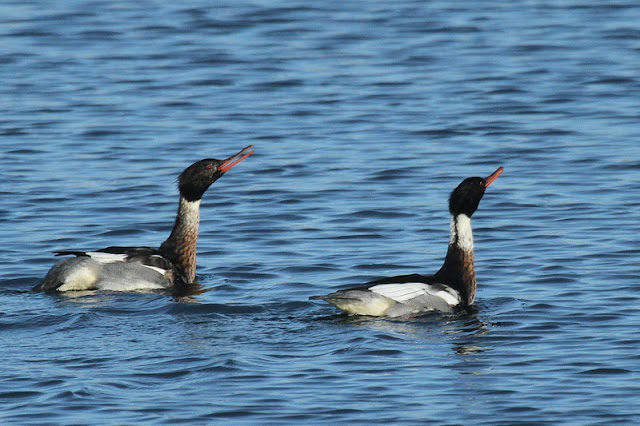 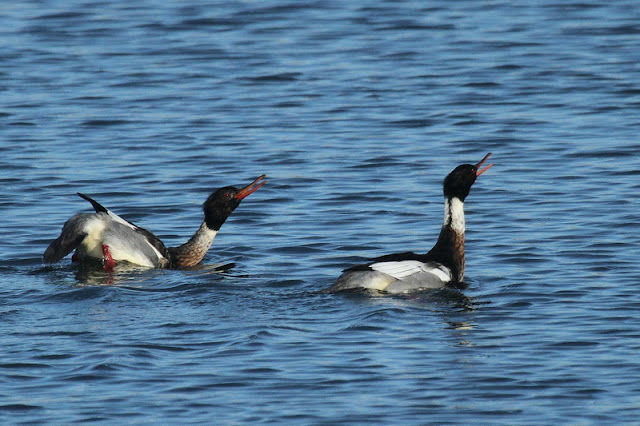 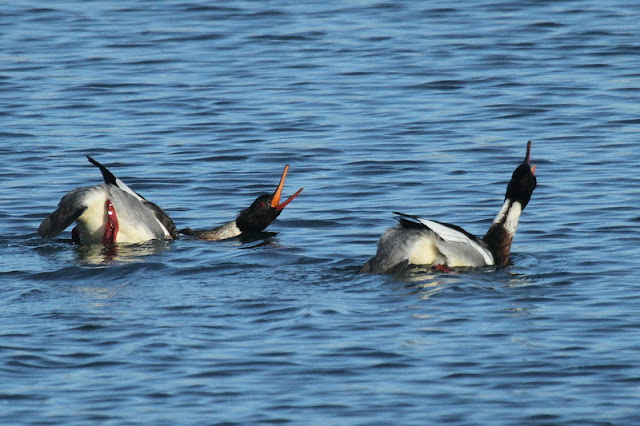 Nest post in a couple of days with the Bufflehead antics. Good birding.
0 comments - add your comment

It is hard to know how many Great Blue Herons are hanging out at Heinz NWR, but in the course of my bike ride and walk on Sunday, I counted over 30.

Many were feeding close to the refuge road. A few images ...

Email ThisBlogThis!Share to TwitterShare to FacebookShare to Pinterest
Posted by Chris Petrak at 6:00 AM
Labels: Great Blue Heron, John Heinz NWR at Tinicum

Sunday was a gorgeous day for a bike ride and walk at Heinz NWR in Philadelphia.


The dabbler numbers were significantly increased from my last visit a week ago.

We were having a leisurely look when they all suddenly took flight. The passing eagle quickly explained their sudden panic.


There were still a few Cabbage Whites, and sulphurs (probably Clouded Sulphurs) on the wing, and around the impoundment pixie-like Autumn Meadowhawks were flying, and occasionally pausing briefly.


Wintering gull numbers are on the increase. Gulls are not a favorite of many, but I like them. Ring-bills were unusually close to the boardwalk.


Several dozen Great Blue Herons were in and around the impoundment - they'll be my next post.

I did a morning trip to Brigantine on Monday. Good numbers of dabblers, otherwise fairly quiet. Even so, a few hours of meditative birding always leaves me feeling fresh and renewed. Some samples from the day:

Plenty of dabblers in the canals and ponds, including American Black Ducks and Northern Shovelers ...


I enjoyed watching this Herring Gull repeatedly dropping this mollusk in an effort to break it open.