Birds were generally quiet and secretive at John Heinz NWR on Friday, but there were many signs of the recent breeding season and the change of seasons.

This young Green Heron waited with patience for food to come near ...


... much more patiently than the photographer who hoped to capture its strike. Within seconds of my turning away from the heron, it made a strike and then retreated along the branches to down its meals ... 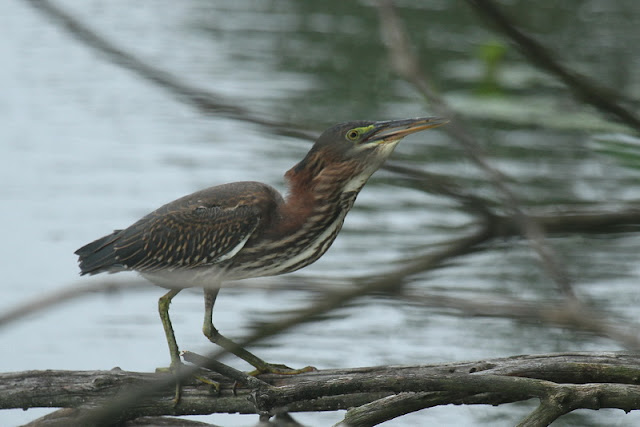 Elsewhere, hen Wood Ducks watched over young, and a pair took over a log which rightfully belonged to painted turtles ... at least that seems to be the opinion of the turtle looking on. The Wood Duck on the right is a drake in eclipse plumage. 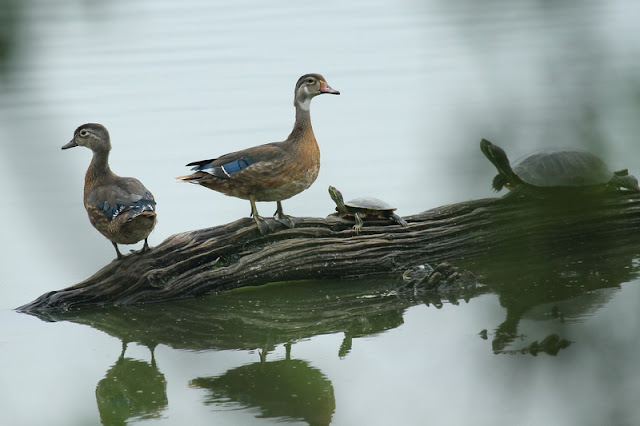 Many young American Robins were following parents, but this young fledgling appears hopeful that a parent will come to it ...

But the really notable feature of the day was the insects, to be posted soon.

In the last couple of weeks, entertainment duties in my backyard venue have been taken over by my favorite bird, the Tufted Titmouse. A troupe of these tiny, crested, gray birds gather around the feeders, coming in from all directions, grabbing a seed, and taking off in all directions.

There is at least one family, with at least six members - it is hard to count because they are always on the move. When an adult flies to the maple, or into the thicket of the lilac, there are two or three youngsters waiting, chirping away, fluttering their wings, and demanding food. A friend once described young Blue Jays begging for food by saying, “Boy, I’d hate to be their parents. They are a bunch of demanding kids.” The titmouse youngsters are no less insistent or demanding, although a third the size of th
e Blue Jays. They make a terrific racket as their parents retrieve food. The racket ratchets up as the food comes near, is interrupted only for the microsecond needed to gulp it down, and then resumes unabated


Since 1927 when Forbush published his work on New England birds, the Tufted Titmouse has been extending its range northward. Vermont Christmas Bird Counts in the 1970s recorded fewer than ten birds until late in the decade when the numbers began climbing significantly. The first Vermont nesting record was in 1976. When the first Vermont Breeding Bird Atlas field surveys were conducted from1977 to 1981, the Tufted Titmouse was recorded in only nine survey blocks. Each confirmed breeding was recorded in the Atlas: nest building in Peru in June; adults feeding young in Stowe in June; recently fledged young in Brattleboro in July, and so on, for the eight confirmed breeding records.

The second Vermont Breeding Bird atlas (2003-2007) documented the dramatic expansion of the Tufted Titmouse in the state. It was recorded in 104 priority blocks. It was scarce only in the northeast of the state.

The Tufted Titmouse is a member of the family “Paridae,” a group of small birds which are often described as treetop acrobats because of the way they flit about and clamber over twigs and branches in search of insects. Titmice are close relatives of chickadees. For most of their taxonomic life, titmice and chickadees have belonged to the same Genus: “Parus.” About five years ago, the taxonomic gurus decided that titmice and chickadees were not quite so closely related, and assigned them to new genera: “Poecile” for chickadees, and “Baeolophus” for titmice.


On the other side of the Atlantic pond, the relatives of these birds are known collectively as “tits,” and include some birds which look remarkably similar to our Black-capped Chickadee, such as the Willow Tit or the Marsh Tit. The Crested Tit has a striking pattern to its head and crest; only the crest (as well as size and shape) brings to mind our plain, gray Tufted Titmouse.

“Titmouse” derives from Old Icelandic “titr” meaning something small; “mouse” is a corruption of “mase” from the Anglo-Saxon for a kind of bird. The plural form, “titmice,” has been influenced by the unrelated word, “mouse.” Hence, the Tufted Titmouse is a small bird with a tuft, or crest. And its relatives in the Old World are “Tits,” or small - the “mase” or “mouse” having been dropped. If you ever hear a British birder rave about all the great tits he saw, he is not being crudely sexist; he is talking about our chickadees and titmice.


The Tufted Titmouse’s range expansion is  probably the result of a complex combination of habitat change, environmental alteration, and climate warming. I worry about that in general, but I am delighted that it is a year round resident in my neighborhood. It will brighten even a winter day. Most birds wait until winter is on the wane before beginning their courtship singing. Not the titmouse. On a sunny day after a major snowstorm, you may hear his “peer, peer, peer” piercing through the crisp atmosphere, a sound of promise and a promise of life.

The titmouse prefers deciduous woods, especially those of swamps and river bottoms, but has adapted to residential woods, village shade trees, and city parks. One summary description of the titmouse goes like this: “active, vivacious, flits about foliage of trees, often hangs head downward while inspecting twigs, leaves, or clings to trunk or branches, searching in bark crevices for insect food, wanders about in winter in small flocks; tame ... intelligent, quick to learn.” (Terres)

The Tufted Titmouse is a cavity nester, using an old woodpecker hole, natural cavity, or occasionally a nest box. Pairs stay together all year. The male feeds the female during courtship and while she is incubating her 5-6 eggs (or sometimes 3-9 eggs). When the eggs hatch, the female stays with the young most of the time, while the male brings food. He often has a “helper,” one of their offspring from a previous nesting. Families tend to stay together through the Fall and Winter, often joining flocks of other small birds, such as chickadees, nuthatches, and Downy Woodpeckers.


The young titmice in my backyard in late August are probably a second brood. At first, I tried to sort out the family relationships, tried to deduce whether I had one or more families. I gave up; I could not even figure out how many titmice there were, they moved about so fast. What with parents, helpers from a previous year or an earlier brood, and a half dozen ( plus or minus),  juveniles, there was more chaos and confusion than I could make order out of. A half dozen resources, consulted after the titmice headed for their nighttime roost, helped me understand some of what was going on. Mostly, I just enjoyed the show.

And ... by watching, I learn. Chickadees have now joined the backyard activity, occasionally announcing themselves with their familiar “chick-a-dee-dee-dee” or even an abbreviated “dee, dee, dee.” I looked more closely when I heard a “chee, chee, chee, chee.”  A titmouse seemed to be saying to its youngsters, “Hey, gimme a break. I’m getting it as fast as I can.” He repeated himself and another joined him at the feeder and grabbed a seed. So maybe he was calling for help.

In late summer and early fall, sitting out back with feet up and a cold tonic at hand, is almost guaranteed to produce some Good Birding!
3 comments - add your comment

Email ThisBlogThis!Share to TwitterShare to FacebookShare to Pinterest
Posted by Chris Petrak at 7:27 AM
Labels: Tufted Titmouse

Recent excursions to meadows and wetlands have yielded additional images of dragonflies and damselflies.


White-faced Meadowhawk ( Sympetrum obtrusum, 1.3") - the most common dragonfly that I have seen this time of year.

Eastern Least Clubtail (Stylogomphus albistylus) - I really puzzled over this ID, and it remains tentative - call it a notch above best guess ...

Canada Darner (Aeshna canadensis, 2.8") - Rarely have I spent so much time trying to get a photograph. This dragonfly was patrolling his patch of wetlands with unflagging energy, occasionally dipping to the water's surface, but never perching. Occasionally he hovered long enough to get a few reasonably focused photos ...

The Spangled Skimmer has appeared in a previous post, but this is a much better pose ...

After straining for several hours to find and photograph dragonflies, I turned attention to chipping in a nearby shrub. A few "pishes" quickly brought a Common Yellowthroat out to investigate ...

Whatever you are looking for, have fun doing it!!
3 comments - add your comment

On Sunday, an Evening Grosbeak was feeding two fledglings. Since the first fledglings appeared in late June, this is possibly a second brood. The young were attentive to Dad with lots of wing fluttering, but otherwise almost silent, unlike the young who have been out of the nest for a few days and are hoping that the free meals will continue indefinitely. 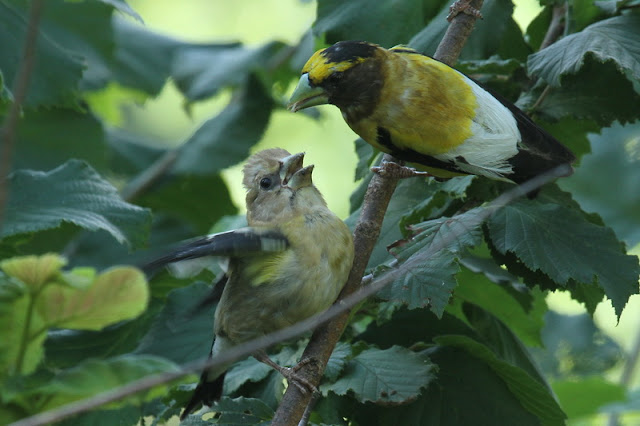 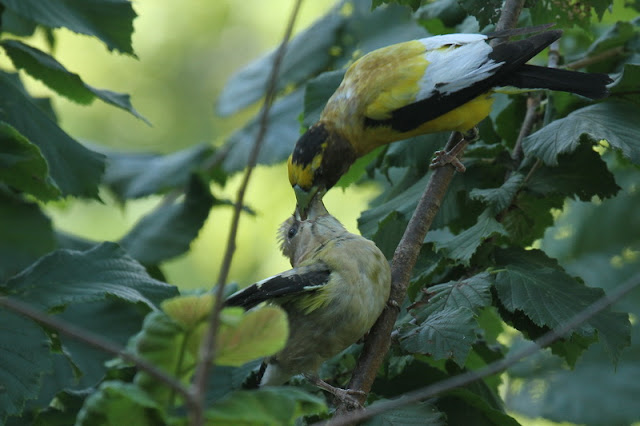 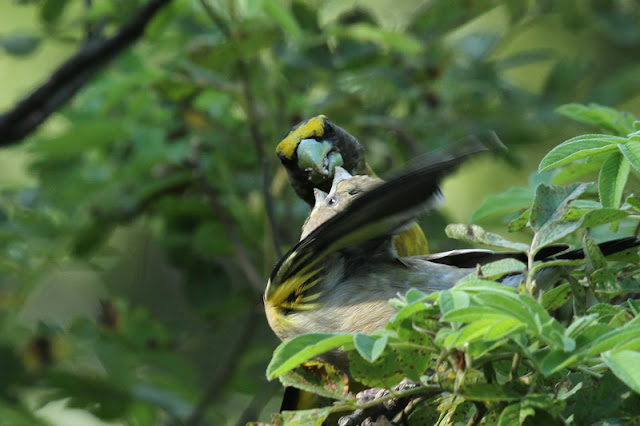 Meanwhile, close by a young Northern Cardinal awaited its opportunity ... 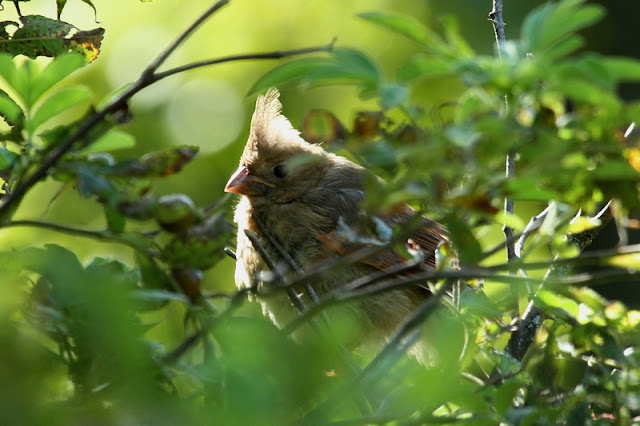 Email ThisBlogThis!Share to TwitterShare to FacebookShare to Pinterest
Posted by Chris Petrak at 6:00 AM
Labels: Evening Grosbeak, Northern Cardinal

Many dragonflies are an ID challenge, but nothing compared to the Damselflies.

By way of illustrating the challenge of Damselfly ID, each species in this guide is accompanied by a symbol indicating the level of observation usually required for a damselfly to be identified to species:
That said, the challenge of the damselflies is a rewarding one - these creatures are small, delicate, require alertness to see, and are often breathtakingly beautiful

This is a continuation of my post on August 6. Dragonflies have gotten my attention this summer. Here are a few, beginning with one in the Emerald family.

First, Common Baskettail - Epitheca cynosura 1.6" - (although I have not completely ruled out identifying it as a Mantled Baskettail).

I am more certain about the next ID -  a member of the Cruiser family:

Continuing with the first post in this series, three representatives from the Skimmer family.

I have encountered the White-faced Meadowhawk - Sympetrum obtrusum, 1.3" - in several locations around Windham County: the Green Mountains near Somerset Resevoir, the fields near Putney ( Wilson) Wetlands, and in the field near my home close to the Rock River. Small, but brilliantly colored:


Close in appearance when first spotted is the Band-winged Meadowhawk - Sympetrum semicinctum, 1.3 -  but with distinctive transparent amber patch in the hindwing, seen when at rest ...

The amber patch in not so apparent in the next photo, but I remember seeing it clearly when in the field ...

Last summer there was considerable excitement when an uncommon Giant Swallowtail butterfly (uncommon for southeastern Vermont) was cited around Windham County.

With the interest the sighting generated, I am delighted to report that the Giant Swallowtail is gracing some gardens again this summer. The species has been frequenting the phlox in my yard for the last two days. A few photos ... 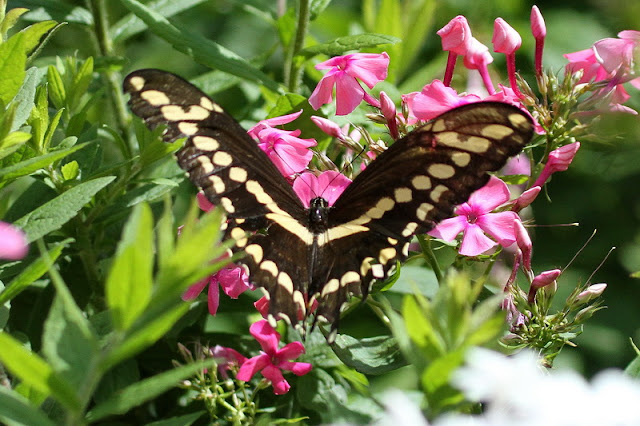 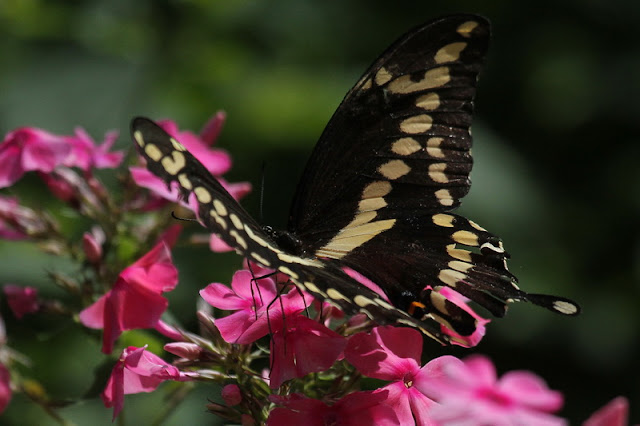 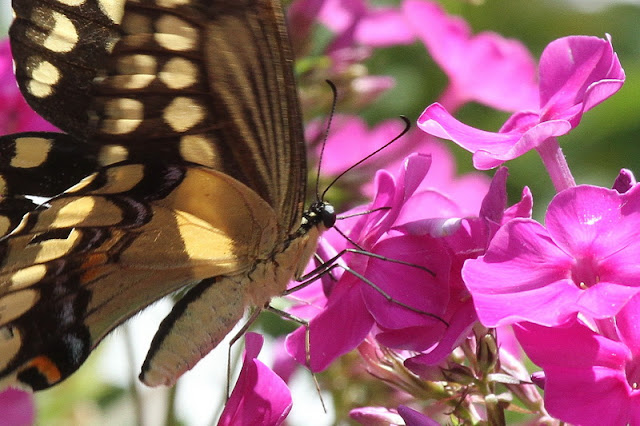 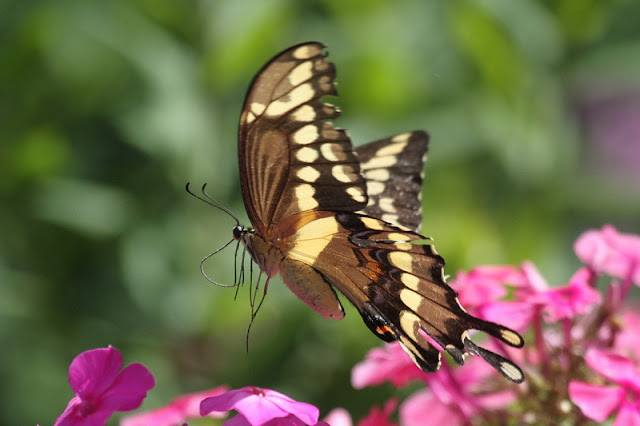 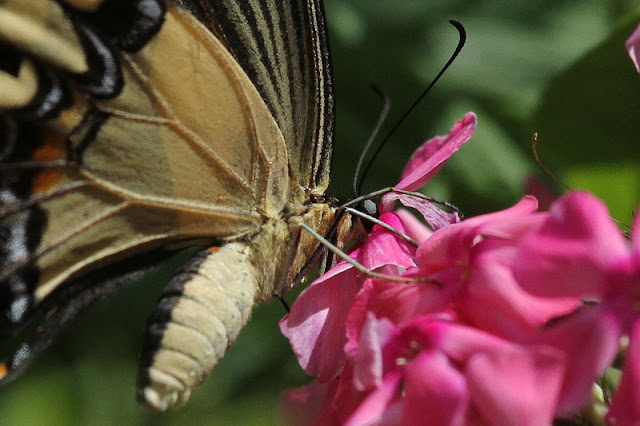 With the avian breeding season coming to a close, I have turned some of my attention to other things with wings - butterflies, dragonflies, and damselflies. The dragons and damsels are new quests for me, and the learning curve has been steep. They also require a very different kind of alertness. There is no audio with these insects, and the sight distance is relatively close by, unlike birds which are often seen at a distance. The use of my camera helps tremendously, since I can study and identify with resources at hand.

The Stokes Beginner's Guide to Dragonflies has been invaluable in these early stages of learning. With a tentative ID, I then try to confirm with Dragonflies and Damselflies of the East, Dennis Paulson (Princeton Field Guides).

Even so, I am not always certain, and many species are closely related and difficult to distinguish. If you think an ID is incorrect, please let me know.

In this post, I begin with some of the larger and more conspicuous dragonflies, all in the Skimmer family.