Watching birds can do lots of good things for you, including expanding your vocabulary. Or at least, it has expanded my vocabulary. Until I had the time to pay attention to seasonal changes and movements of birds, I did not have the word, “irruption,” in my working vocabulary. I knew “eruption,” which involves something bursting out, like lava from a volcano. Irruption refers to something bursting in, or surging up. It is the word used by ecologists to describe a sudden, rapid, and irregular increase in an animal population. It typically involves some kind of change in the natural ecological checks and balances.

In the bird watching world, irruptions are hoped for events, especially as winter imposes its grip. Winter birding can be rather monotonous - the same old, same old, unless one or more irruptions occur. “Bird Source,” the website of National Audubon and Cornell Lab of Ornithology, puts it this way: “Every winter, bird watchers across North America anxiously await the possible incursion of birds that don't normally winter in their areas. These periodic bird irruptions add a dramatic level of excitement to winter birding.”


Last winter (2011-12) was an irruptive year for Snowy Owls. These large arctic predators were reported in record numbers across the northern states, often in places where they have rarely, or never, been reported. Sightings extended deep into the Great Plains and even as far south as Texas. The Snowy Owl irruption was driven by a crash in the lemming population in the Arctic; the lemming is the owls’ principal food source.

When a Snowy Owl was reported in mid-December, 2011, in the corn field behind the marina in Brattleboro, the word spread quickly through the birding community. Within an hour of the first report, a dozen birders were focusing their scopes on the white object among the corn stalks. More observers followed in a steady stream.

Finch species which inhabit the northern forests are the most common irruptive birds, and this winter has been a banner year in our area. During October, large flocks of Pine Siskins (closely related to the American Goldfinch) moved through New England and the mid-Atlantic states. The flocks which visited my bird feeders numbered 200+; they put a serious strain on my bird seed budget.


The siskin flocks moved on, to be followed by the Common Redpolls (also closely related to goldfinches). Throughout December and January, and on into February, there have been breathless reports about the sudden appearance of these small finches.

What makes the winter irruptions both exciting, and frustrating, is their unpredictablility. As the birds irrupt into New England, they do so in flocks - often large and typically very nomadic. So you hear about all of these redpolls being seen, and you are frustrated, because you have not seen a single one. And then you are snowshoeing through an old hill farm, or walking along a frozen lane, or sitting in your kitchen watching your bird feeders, and suddenly you have a surfeit of redpolls, scratching the snow, squabbling over seed, and taking hurried flights into the hedges.

Winter finches are notorious for quickly exhausting a food source and then moving on. The epitome of this practice is the Evening Grosbeak. Long time bird feeders describe the Evening Grosbeaks’s winter presence with ambiguity. They are delighted to have these large, colorful, and handsome finches at their feeders, but they cannot avoid the additional use of adjectives such as voracious and greedy to describe their presence. This winter Evening Grosbeaks seem to have taken their blitzkrieg feeding habits further south; I have seen few winter reports from our area.
The winter finches which are typically more common in our area have been hard to find this year. In addition to the siskins and grosbeaks which have moved on, Purple Finches and goldfinches are scarce.


But then there are the frustrating reports of other winter finches - frustrating because you would love to see them, but they do not make it easy. For a couple of weeks in December, a flock of Pine Grosbeaks fed on the yew berries in front of Center Church in Brattleboro. There were females and young males. (The adult males apparently stayed home to defend their territory through the winter). When the berries were exhausted, the flock moved on. If you have not seen the Pine Grosbeaks, you may still have the opportunity. Be alert, because they could be anywhere. On the Christmas Count, we came across several getting grit and salt on a road in Dummerston. If you miss the Pine Grosbeak this winter, I am sorry to tell you that you may not have another opportunity for several years. But, that’s bird watching.


On the New England coast, this has been a good winter for Red Crossbills and White-winged Crossbills. I made a trip to Salisbury Beach on the New Hampshire coast and had my best crossbill day ever.

Winter irruptions are driven by conditions in the northern forests. Scientists and naturalists in Ontario and the Maritime Provinces have been studying the preferred food sources of various species for years. Based on their collected data, fairly accurate predictions are possible about which species will irrupt. When they document the shortage of a food that a particular species prefers, they predict an irruption. Winter survival depends upon getting enough food. When local food sources are scarce, the birds go elsewhere.


Finches are the most common irruptive species during winter, but not the only ones. It is easy for us to miss an irruption of the Red-breasted Nuthatch, since this species also nests in the higher elevations of our area and may be seen year-round. Harder to miss when you come across them are the Bohemian Waxwings. When you find Bohemians among the flock of their cousins, the Cedar Waxwings, then you have counted a coup among bird watchers. And when you meet a waxwing flock dominated by Bohemians, you have certainly encountered evidence of an irruption. And, you will be breathless.


For any of these winter irruptions, I have two pieces of advice if you are not a hard core birder: First, I am sorry to say, don’t hold your breath. The winter flocks are nomadic and erratic. Hard core birders sometimes spend days trying to chase them down, not always successfully. Second, when you do stumble on one of these flocks, or when one of these flocks stumble on you, don’t forget to breathe!

I made my first ever visit to Bombay Hook NWR on the Delaware Bay in Delaware. It was a delightful refuge and will merit return visits during other seasons.

For a late winter day of birding, it was a very good day, and even yielded some good photo opportunities ...

... as for example, the Belted Kingfisher, a species that has been devilishly difficult to photograph. But this female posed on branches above a canal, apparently unconcerned by the several photographers who crept around taking her picture ...

Near the historical Allee House, two Black Vultures, usually seen soaring high overhead, were up close, and almost too personal ...

For the second time this winter, I have seen Great Horned Owl - usually at this time of year the limit of contact is their haunting hooting. Not much action from this roosting owl, save for the occasional turn of the head ...

This young red fox hunted in the short grasses along the refuge road ...

And finally ... there were plenty of waterfowl in the pools and ponds, and in nearby fields, several thousand Snow Geese ...

Last Sunday I returned to Heinz NWR in Philadelphia for another delightful morning walk. Still no sighting of the Northern Shrike that has been reported, but there were sights and sounds which provided evidence that Spring-time thoughts are in the minds of some birds, in spite of the recent winter storm.

For example, along Darby Creek, this Hooded Merganser had his crest up as he proclaimed his handsomeness to the nearby hen ...


Many songbirds were trying out their territorial / attract a mate songs including White-throated and Song Sparrows ...


Along Darby Creek, this Belted Kingfisher gave me an opportunity that the residents along the Rock River behind my Vermont home have not given me - a reasonable photo opportunity as it flew up and down the creek ...


Several minutes of entertainment were provided by the White-breasted Nuthatch displaying its acrobatic foraging techniques. The following photo does not conveys something of that acrobaticism. I include it because in this case I especially like the photo's composition, the texture of the branch, and the wispy details hanging from the branch. Deep in the rotting crevices, it found tasty morsels ...


And ... in the same tangled mass of bittersweet, the Northern Saw-whet Owl was once again roosting. Its position was just slightly different from my previous sighting, giving a better opportunity for a photograph ...

My recent visit to Heinz NWR at Tinicum in Philadelphia was notable for owls (see previous post) and delighted by kinglets and creepers.

In the Vermont forests where I usually wander, kinglets and creepers are typically elusive; satisfying views are difficult to attain. So when I came upon them working the trees along the trail, I lingered.

As I brought up my camera, this male Golden-crowned Kinglet broke off a piece from the icicle hanging along the tree trunk ...


Apparently, the piece was too big to handle/chew. He dropped it, but then returned to the frozen drinking fountain and broke off a smaller piece. 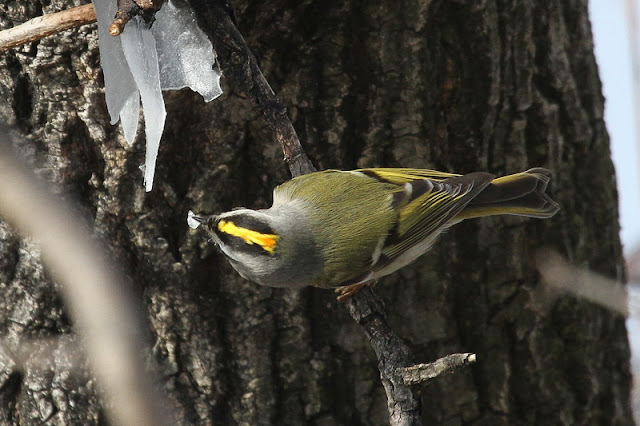 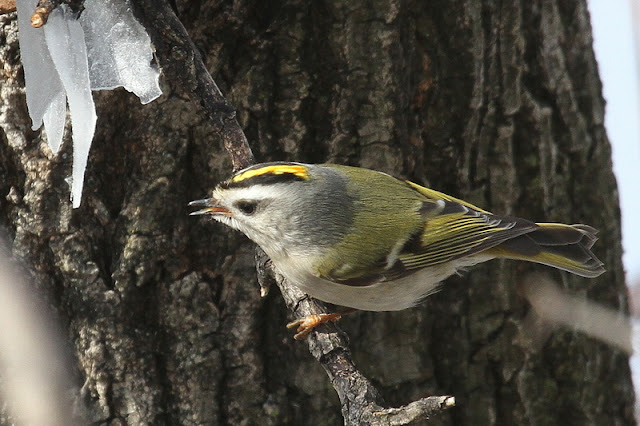 Nearby, a Brown Creeper worked the bottom of branches and crept up the trunk ... 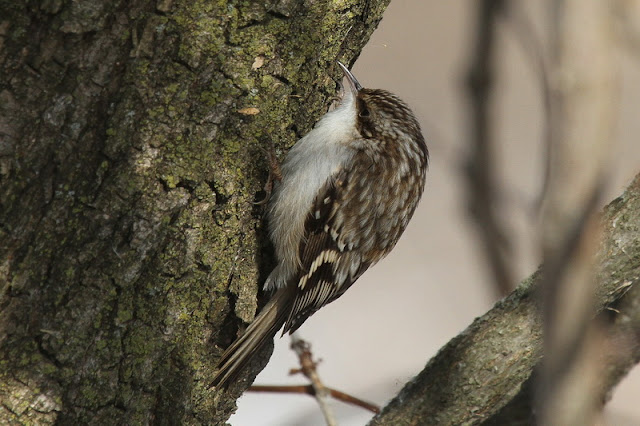 ... finding something tasty, or at least marginally edible and nutritious, tucked into bark crevices ... 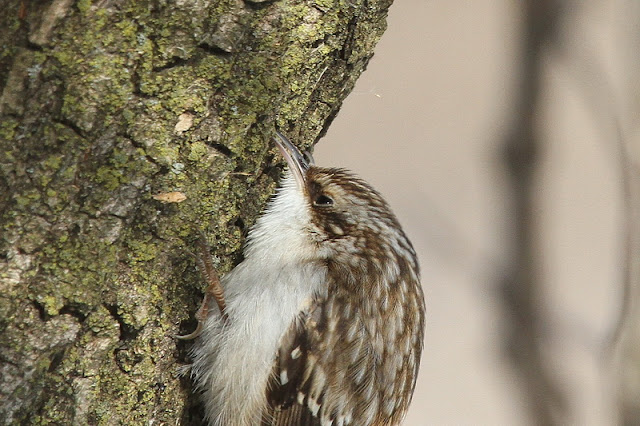 At my home in Vermont, I have had several oblique contacts with the Northern Saw-whet Owl. A neighbor who rehabs raptors had one in his barn that he was nursing back to health. Another neighbor found a dead saw-whet owl in his wood shed. Yet another sent me a photo of one on his front porch. And one more tells me about hearing them in the woods around his home. But until yesterday I have never seen or heard one.

Yesterday, I ticked my first Northern Saw-whet Owl - not in wilds of the Green Mountain State, but within the city limits of Philadelphia, at John Heinz NWR at Tinicum. The little fellow was tucked into a tangle of bittersweet vines about 20 feet from the bike and jogging trail ...

It seems like a disconnect to see a "wilderness" bird within the city limits of a major city, but the Northern Saw-whet Owl was not the only such disconnect. Before seeing the saw-whet, a large brown mass in the top of a tall tree drew the focus of my binoculars - a Great-horned Owl. I have had good views of this fierce predator on several occasions in Arizona and Texas. But, around my home in Vermont on only a very few occasions have I heard the haunting hooting sometimes rendered as "who's awake ... you too." From his tree top perch, he followed my steps on the path below ...


Though most of the impoundment and ponds of the refuge were in the frozen grip of winter, the Great Horned Owl was, or soon will be, on the nest. The resident Bald Eagle pair has been remodeling its tree top aerie and will also be on the nest soon. Nearby, planes took off and landed at the Philadelphia airport.
Good birding!
5 comments - add your comment