The Welcome Presence of the Evening Grosbeak 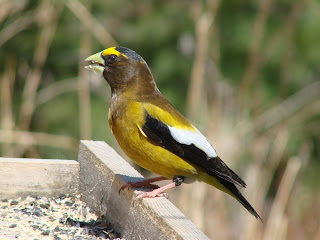 When we lived in Pennsylvania, some winters our yard would be visited by greedy feeder thieves who would descend upon the bird feeders in a flock of ten to twenty birds, clean out all the seed from the feeder, then fly on. The attack would be repeated every two or three weeks, until Spring finally returned. Then they would be gone, not to be seen again for another two or three years.

Evening Grosbeaks were irruptive winter birds in my previous home some miles to the south. In spite of the spike they created in the bird feed bill, they were welcome visitors. The male’s gaudy plumage, dominated by bright yellow, was a spark of color against the gray-brown winter landscape. The sudden appearance and equally sudden disappearance of the nomadic flock - the enthusiasm of their voracious appetites - the energy with which the flock seemed to do everything - all helped to chase the winter doldrums.

Evening Grosbeaks visit my Vermont yard only rarely during the winter months, usually early in the winter. Then, I suppose, they roam southward in search of a more temperate climate and more abundant food sources (even though the food stock in my feeders can hardly be called sparse.)

And that’s all right, for their winter absence gives me something to look forward to - that time when the summer resident Evening Grosbeaks return to pair and mate and raise their young in my neighborhood. Nearly every year throughout the summer, at least one pair of these large, bright finches lives nearby. Their regular visits interrupt my work; I just cannot go on doing whatever I am doing when they are there.

For a bird of such stunning beauty, there is surprisingly little folklore attached to it. This is probably due to the fact that when the European colonists were settling the Atlantic coast, the Evening Grosbeak was not present. When first found and described by the early naturalists, the Evening Grosbeak was primarily a bird of the far Northwest, although one of the earliest specimens was collected at Sault Ste. Marie.

When first discovered, the Evening Grosbeak was observed to sing in the evening - hence its name. The observation was wrong; it does not sing only at sundown. Nevertheless, this early observational mistake has persisted in both common name and scientific name. 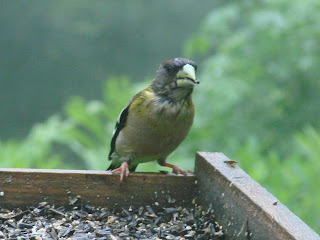 Scientifically, the Evening Grosbeak has been named (until recently) Hesperiphona vesperina. Hesperiphona refers to the Hesperides, the “Daughters of the Night,” who dwell on the western edge of the world where the sun sets, recalling the western regions where it was first observed. Or perhaps more precisely, as one source suggests, the name comes from the Greek hesperios, “at evening,” and phona,”voice” - hence “evening voice.”

With scientific redundancy, the species name is vesperina, from the Latin meaning “belonging to the evening.”

Scientists have recently reclassified the Evening Grosbeak. It is now Coccothrautus vesperina. It shares its Genus with the Hawfinch of Europe and the Hooded Grosbeak of South America. I have not been able to trace the derivation of the Genus name, but it still “belongs to the evening.”

Since the early nineteenth century when the Evening Grosbeak was first described by science and was known primarily as a bird of the far west, it has been expanding its range eastward. The first record of the bird in southeastern Massachusetts was in March, 1890. In the 1920s, Edward Forbush still did not have much personal experience with the Evening Grosbeak in Massachusetts. In 1940, James Baille found six breeding pairs in New England. The first Vermont Breeding Bird Atlas in 1976, recorded twenty-seven probable or confirmed areas of breeding. The current breeding bird atlas research, which still has one more season to complete, has already recorded ninety-nine probable or confirmed breeding areas in Vermont.

The Evening Grosbeak is a bright and conspicuous bird. Such bright colors are usually associated with tropical birds such as the Baltimore Oriole, Scarlet Tanager, Indigo Bunting, Rose-breasted Grosbeak, and most of the warblers. Parrots are almost entirely tropical or sub-tropical birds; the Evening Grosbeak has sometimes been called the English Parrot, on account of its plumage, big beak, and occasional feeding habits. However, the Evening Grosbeak is anything but a tropical bird. It is a bird of northern and western forests, its range straddling the U.S.-Canadian border. In winter it may range as far south as the Mexican border and Gulf states, but it will also range northwest into the southern Yukon territories. How then does it come to be so colorful? 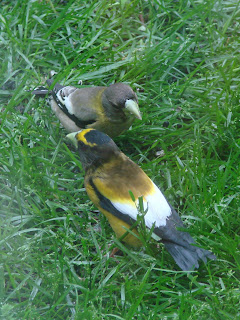 The answer is found in the Evening Grosbeak’s original homeland in the Northwest. Arthur Bent in his 1968 life history of the western Evening Grosbeak writes that it “is largely a bird of the higher altitudes whose plumage is a blending, a chiaroscuro, of the high-lights and shadows of the great hills.” He cites Enid Michael who wrote from Yosemite in 1926: “The Evening Grosbeak ... furnishes a splendid example of protective coloring in birds. It is brilliantly colored white, yellow, black and olive. It would seem to be one of the most conspicuous of high Sierran birds. Yet its brightest color is almost identical with the lemon color of the lichens found throughout our high Sierra.”

Another writer in 1902 wrote: “While watching the birds on Mt. Shasta one day, I was struck by the conspicuousness of one that flew across an open space. As it lit on a dead stub whose silvery branches were touched with yellow lichen, to my amazement it simply vanished. Its peculiar greenish yellow toned in perfectly with the greenish yellow of the lichen.”

These accounts remind me that when driving our dirt roads in the summer time, I have seen the gravely road in front of me suddenly burst into flight. Evening Grosbeaks, picking up grit and salt, blended into the roadway until my vehicle came to close. Then at the last moment, they flew. (At least, I prefer that explanation for their sudden appearance over the one that has me not paying close attention to what might be on the road ahead of me.) 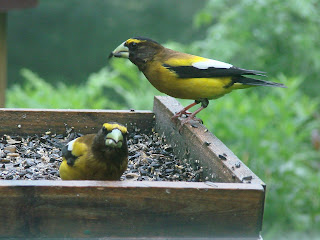 The Evening Grosbeak is a big, stocky finch with a bearing that makes me think of a pugnacious street fighter. But appearances are deceiving. When food is plentiful, most observers use adjectives like quiet, sedentary, gentle, and unafraid. When unmolested, they can become almost tame. They approach backyard feeders from a high perch, where they check things out before coming in to share freely with others birds.

The Evening Grosbeak will not be found in all of our local neighborhoods. It prefers mature, open-canopy mixed forests, preferably coniferous, or coniferous-deciduous. Fortunately, I live close to such forests which are home to nesting pairs. Even today when I am writing - with dreary skies and drizzly rain - when many of the birds are wet and bedraggled, stressed by weather and nesting and feeding - the Evening Grosbeak comes with his crisp yellow and black and white, and brightens the day. A good bird and good birding!

Nice pictures! It makes me long to see them even more. I have heard random reports already of Evening Grosbeaks in south central PA but have not heard nor seen any myself. In fact it has been many a year since I last seen them. Not since I lived in Massachusetts more than 25 years ago now. So my next Grosbeak will be the end of a long drought that I will celebrate!
Vern