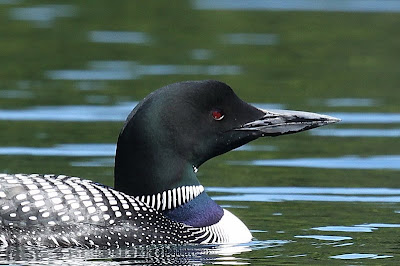 Two weeks ago, I wrote about the nesting loons on a nearby mountain lake. I reported that a dead loon had been found on the lake, apparently killed by the resident loon pair. A reader sent me an email, reporting that she was kayaking on the lake and saw the attack: “It was brutal and quick, the killing. They are such powerful birds.” I posted the email on my blog along with a photograph of one of the resident loons. That post brought this response: “Now that I've heard this story, the loon in your photo looks rather tough and no-nonsense.”

That is the way nature is: tough and no nonsense. Often brutal and violent.
So much of our lives are lived in a protective, artificial bubble, where temperature is controlled, inconveniences minimized, and life sanitized. But intrusions occur, nightly or even hourly, as modern media makes a disaster out of a thunder storm and a crisis out of a traffic jam ... where wars and rumors of war abound, where we are reminded again and again of how human degradation and brutality or just plain greed can destroy lives and livelihoods, and contaminate the pristine and beautiful.

That is how we so often look at the natural world outside of our bubbles - pristine, lovely, peaceful, a place of tranquility and regeneration. The spirit is refreshed when a rainbow sparkles in the sunlight after a gentle rain, or when the setting sun reflects across quiet waters, or moonlight bathes the night with soft light.

All is in order when we see deer grazing in a meadow, or a beaver swimming through a glassy surface, trailing a gentle wake. We love watching the sweet, little birds that hurry back and forth at our bird feeders. Even the chipmunk can bring a smile to the face as it stuffs its cheeks with fallen seed, tilting its head in curious observation as we stir nearby.

But that is not the way it is. The world outside of our climate controlled cocoons, outside of our frantic and over busy lives, outside of our technological insulation and electronic amusements, does not exist for our escapism. That world is an complex laboratory for life, a continuous experimentation in what works, what works best, what will best survive. 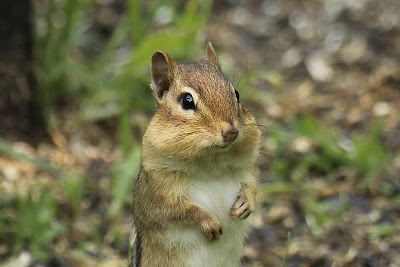 The chipmunk that most quickly learns not to trust the slightest movement in its vicinity, even your benign stirring, is most likely to live long enough to pass along its survival genes. Cute as it may appear as it gathers your fallen seed, its purpose in life is 1) to produce a new generation and 2) to be food for something larger.

I watch the songbirds in my backyard. They are raising their young. They feed their young with insects. They consume prodigious quantities of tiny, bothersome creatures. Is that good? But then a hawk comes through the backyard and kills one of those beloved songbirds. Is that bad? 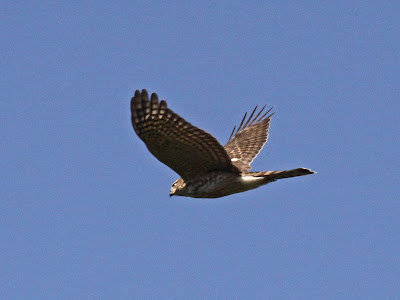 Neither. Good or bad simply do not apply. Those are value judgments which may be appropriate as we consider our actions, the actions of other people, or the events of history. Creating a hierarchy of acceptable behaviors, articulating moral and ethical standards within the human community, is an ongoing endeavor for those who aspire to a civilized, and civil, world. Though it may sometimes seems like an exercise in futility, it is an endeavor we can never let up on.

The loons on the nearby mountain lake are sleek and graceful in the water, and superb underwater swimmers. (In Europe they are called “divers.”) They raise two chicks a year. When the young are left on their own, they must learn to feed themselves, avoid predators, and survive storms and all manner of unexpected dangers for several years before they will be old enough to reproduce. That means that for the sake of the species, each breeding pair must take a no-nonsense approach to raising their two chicks each year. And if that means driving out Canada Geese and chasing off Mallards, and preventing other loons from competing for food, nesting space, or breeding rights, then that is what will be done. 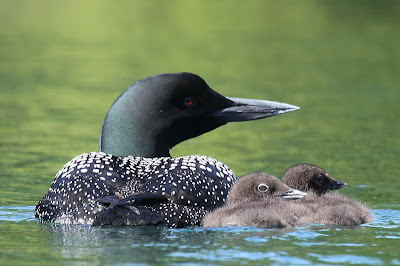 The Common Loon is a large bird - nine pounds, thirty-two inches long, and a four foot wingspan. The adult loon does not have many enemies. Apart from humans, the biggest threat may come from the Bald Eagle which preys in particular on the eggs and the chicks, and on the juveniles after the parents have left them on their own. From a lake in Minnesota, I found this account: “The eagle attacked, not an unsuspecting fish, but the loons! It swooped in and landed on tree stump next to the loons’ nest. One of the loons then kept screaming that eerie loon scream, scolding the eagle. They faced off for about 10 minutes. ‘Every year the loons try to lay eggs here, and every year the eagles get them,’ an observer said. The larger loon stood its ground on the nest while the other screamed at the eagle. With the loons unwilling to budge, the eagle eventually gave up and flew off. The loons won this battle, but that eagle will be back. The war will continue.”

There is good reason for the loon to be tough and non-nonsense. It is in constant competition to prove that it can survive.

Compelling, thoughtful article and stunning photos. A reminder of the world we really live in....

Very interesting. Love the Loon and babies, but then, that's my anthropomorphising (phew!). The idea of 'cute,' or otherwise entertaining is so subjective, too. How about Turkey vultures with thier nobby, red heads and see through noses? Who's to say they aren't cute to somebody? Or the Herring Gull that just landed in my swimming pool. I keep trying to tell my husband that it's cute but he's not buying that! "OUT!" is all he can say. Nice post, very thought provoking.