The turkeys continue to come to my feeders, although I have been trying to discourage them. On my lower lawn near the river, some grass has reappeared, and the turkeys seem to be finding something to eat.

In a sign of Spring, the tom turkeys are beginning to strut, displaying themselves to the hens. I slipped quietly through the kitchen door this morning with my camera, hoping not to alert the skittish birds to my presence on the back porch.

This tom was probably the most impressive with his tail fanned, his wings displayed, his bald head a brilliant blue, and his red wattle aglow. 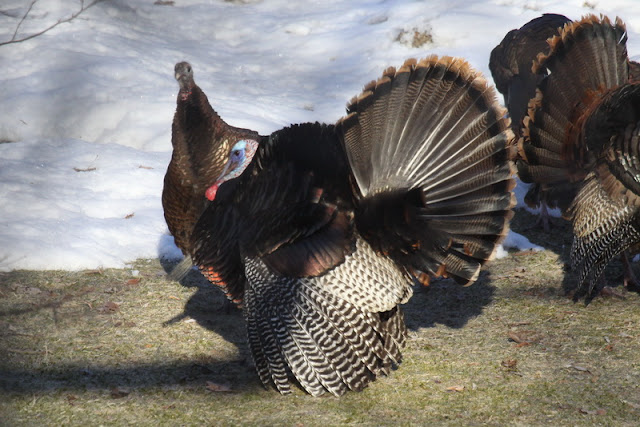 There are stories with the toms that I wish I could tell. The tom on the right looks a bit bedraggled. Has he had frays which have broken feathers? Or has he not gotten in his new feathers? By contrast, the tom on the left looks like he is still growing in his tail feathers - notice how much shorter the feathers are on the left of his tail (as we look at him). 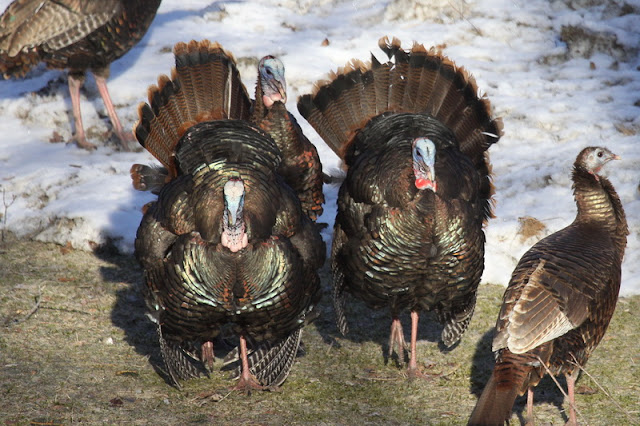 There were at least four tom turkeys who were displaying for the hens; they numbered around twenty. It is early in the season, and the hens do not appear much impressed.

While the toms were preoccupied with one another and showing off for the hens, the hens began to get skittish. I was slowly trying to maneuver myself so that I did not have branches in my line of sight. The hens became aware of my movement, gathered at the river bank, then flew to the other side. Eventually, the preoccupied toms realized that their audience had left them. 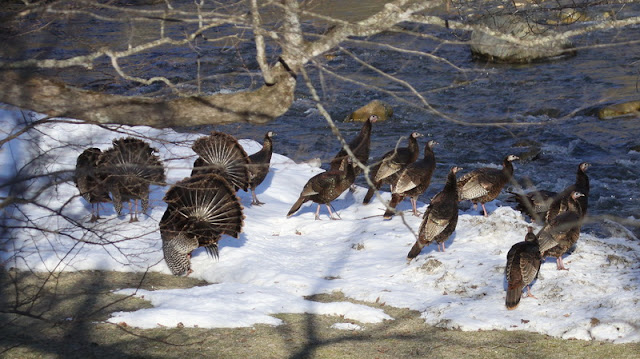 With unarguable hormonal logic, they soon followed the hens across the river. 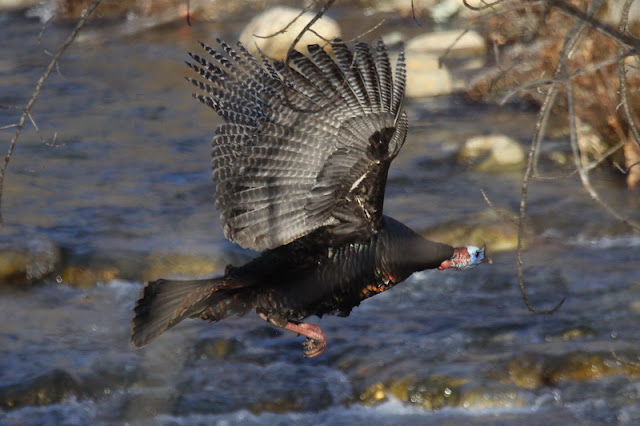 Wow, I can not imagine having these wild turkeys in my yard or at my feeders. My hubby has seen them on the fireroads near our house. Great shots, Chris!

Very cool pics, esp. like that flying shot - you don't see many of those!

Wow those are some impressive photos! I bet turkey babies would be pretty cute.

Wonderful!
They are gorgeous!
I think the male on the left, second pic, has his tail twisted somewhat, maybe that' why the feathers don't seem the same size!
I wish I could do similar photos: there amazing, especially to someone who hasn't got them in her backyard! LOL!
Fantastic catch, the flying one!
You seem to have quite a bit of snow left!
Cheers, Chris!

One Turkey is gorgeous....but a big group of them is really majestic...!!
Their winterfeathers look great in the white snow....!!!!