I am trying to make friends with the resident crow family.

A mated pair has nest near the river behind my home for several years. They appear in early Spring with a helper - a young bird from the previous year's brood. They did so again this year, cleaning seeds beneath the feeders. 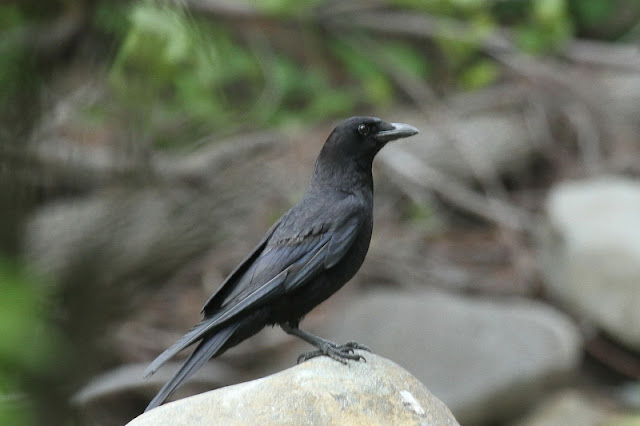 In late May, there was lots of noisy activity as the four chicks from this year's brood fledged, and called for food. The parents and their helper scurried about to meet the demands of the young birds.

The family is still together, though the young birds are beginning to figure out how to feed themselves.

Of course, I am making a lot of surmises about this pair, helper, and family, but the surmises are reasonable and supported by research and observation. Crows are intelligent. They have language and culture which they pass along to the generations.

While much of what they say sounds like "caw," as I have listened this summer, I hear many nuances and variations.

One day recently, five of the family were milling about on the neighbor's grass near the river. My surmise: the helper was baby sitting. Keeping an eye of the youngsters and watching for danger. A mere glance in their direction on my part sent them flying.

So how am I trying to make friends with them? Two or three times a day I put a quarter cup of kernel corn, shelled peanuts, and unshelled peanuts on a rock. I often do this when I know the crows are nearby and watching. I speak to them. I show them the cup with food ... and I ring a bell. 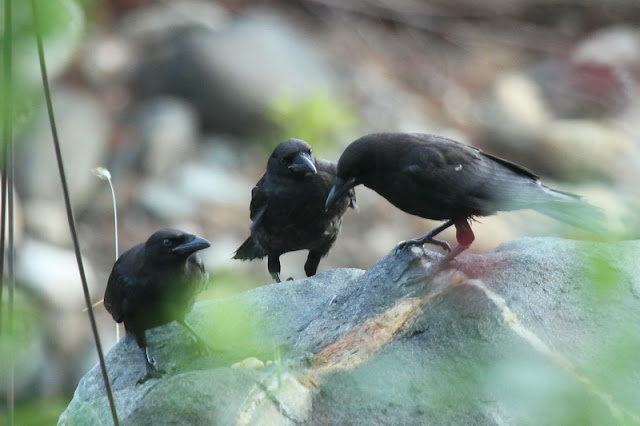 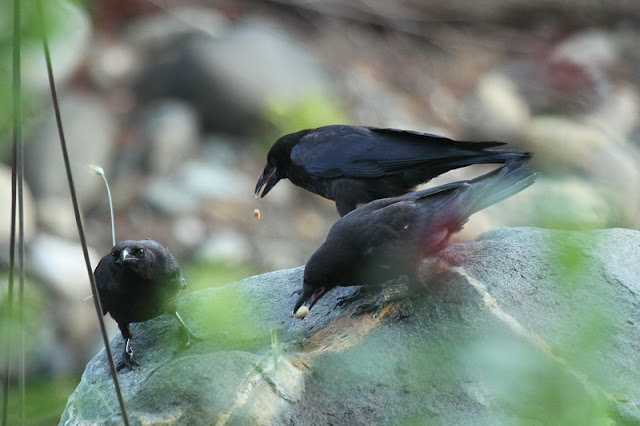 Am I making friends? I don't know. They are wary (as well they should be considering how often creatures like me fire guns at them).

Occasionally, one perches on the rock, as though waiting for me to come with food.

I put out the food. I watch. Then I go about my business, return, and the food is gone. A few times I have seen them eating my offerings.

It will take time to build trust, but I enjoy the company of creatures that are intelligent - even some who might be smarter than I am. Maybe I can learn something.

Email ThisBlogThis!Share to TwitterShare to FacebookShare to Pinterest
Posted by Chris Petrak at 10:04 AM
Labels: American Crow

very neat Chris, hope they get accustomed to you.