I waited for the traffic lights on the busy avenue to turn red and for the traffic to clear. Then I hurried across the four lanes, the bike paths, the median strip, and the bus lanes.  I stepped into the woods and began to pick my way down the rocky path, descending into the Wissahickon Gorge. At the bottom of the path is the river; I followed the roadway upstream.

The steep sided valley of the Wissahickon River was Philadelphia’s industrial center in the seventeenth and eighteenth century. As the industrial revolution rendered small mills obsolete, buildings and businesses were abandoned. In 1868, the city transformed the river valley into an urban park. The park wanders seven miles through Philadelphia’s northwest section. On one side it is bordered by neat working middle class neighborhoods, on the other by upscale upper middle class neighborhoods. The single road is closed (forbidden) to motorized vehicles; hikers, walkers, joggers, bikers, and an occasional sedate equestrian use the road and the maintained trails. Deer share their paths with other wildlife. The Wissahickon valley is also a favored place for bird watchers; it is not unusual to see one or more bird watcher staring into the tree tops.

On the day in question, I carried my camera. I knew that there were at least a dozen Wood Ducks along the river. I planned to photograph them.

The Wood Duck is a woodland bird. It likes ponds and streams which are bordered by woods. It will fly, or walk, deep into a forest to eat nuts, insects, or whatever small life it may encounter.

With the return of the forests in Vermont, and with beavers ponds scattered through our hills and valleys, the Wood Duck has made a significant recovery in our state. It is a cavity nester; using holes in large, partially rotting trees, or which have been excavated by Pileated Woodpeckers. Humans have helped significantly by providing artificial cavities in the form of Wood Duck nest boxes.

The casual, but alert bird watcher may see Wood Ducks in Vermont  every year. The attentive birder will see them. When December is mild and the water is ice free, they are seen on the Christmas Bird Count, glimpsed on the back edge of a pond or gliding around the islands in the Retreat Meadows. In the depths of winter they disappear, but when the ice begins to go out, they will be one of the first waterfowl to return - if the birder searches for them.

The Wood Duck is shy and secretive - the more so during the breeding season. Wood Ducks nest regularly on a beaver pond atop Newfane Hill. I have spent long hours skulking around the edges of the pond, feeding the mosquitos and hoping I could get good photographs of the Wood Duck. Early in the year, the slightest misstep sends the ducks flying. Later, when the female is attending to her young, she senses my approach to the pond edge long before I reach it. She leads her young to the opposite side of the pond, or quickly slips out of sight among the reeds. I could spend a whole summer trying to capture a good image of the Wood Duck and never come close. With all of the wonderful Wood Duck habitat which Vermont has, getting up close and personal with a Wood Duck is very difficult.


Here is the irony: when I want to get up close and personal with the Wood Duck, I go to a large city park in a big city: the Wissahickon in Philadelphia. I hear planes high overhead. I hear a distant rumble of buses from the busy avenue. I also hear the rattle of the kingfisher, the quacking of the Mallards, the drumming of woodpeckers, and the whistle of the Wood Duck. And I come home with dozens of images of a bird which doesn’t look quite real.

But the Wood Duck is real - and a survivor. In spite of the nineteenth century’s conversion of forest to farmland and pasture, and in spite of heavy hunting, the bird persevered. When hollow trees in the forest became scarce, it found alternatives, like apple trees in an orchard, or hay in a barn loft where it gained entrance by squeezing through a broken clapboard.

Today, with hunting regulated, woodlands restored, and natural adaptability given full reign, the Wood Duck is one of our more common ducks. In the precolonial period, it probably outnumbered Mallards and Black Ducks. It has not returned to those levels, but its conservation status is summarized with these few words: “Species is doing well in all parts of its range.”

Other bits and pieces about the Wood Duck:

– The Wood Duck is a perching bird and may be seen perched in a tree.

– In the southern portions of its range, it may raise two broods in one breeding season, the only waterfowl to do so.

– Like all waterfowl, the hatchlings are precocial, able to feed themselves shortly after hatching.

– Young Wood Ducks have hooked claws on their feet and hooked nails at the end of their bills; these enable them to climb out of their nest box/cavity, and depending on the location of the nest, climb down to the ground. Alternatively, they simply fall lightly to the ground.

– The scientific name is Aix sponsa: “waterbird in bridal dress.” 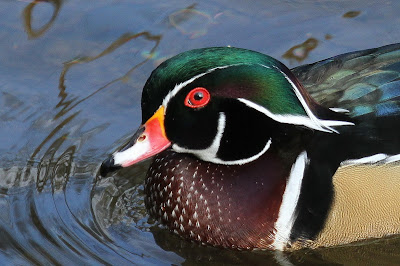 – Among the folk names for the Wood Duck are “The Bride,” “Bridal Duck,” “Swamp Duck,” and “Acorn Duck.” The latter reflects the Wood Duck’s frequent foraging on woodland acorns. One observer reports examining specimens taken in the fall with crops completely filled with whole acorns.

There is irony in the accessible presence of Wood Ducks in a major city verses their elusiveness in the natural habitats of Vermont. But it highlights the fact that if you want to see birds, you often have to go where the birds are. The drop-jaw beauty of the Wood Duck makes the trip worth it.

Email ThisBlogThis!Share to TwitterShare to FacebookShare to Pinterest
Posted by Chris Petrak at 8:29 AM
Labels: Wissahickon River, Wood Duck

Wonderful article. Going where the birds are is always an adventure:)