A Rare Wintering Red Knot on the Massachusetts Coast 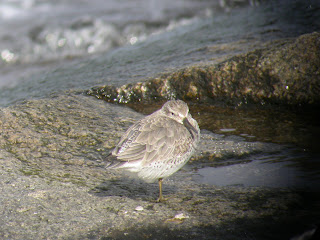 It was early afternoon when we started clambering over the rocks at Halibut Point. The sun had broken through the hazy clouds and lent a hint of spring to the day. Even so, our final quest for the day had some urgency to it. Snow was moving eastward and we wanted to begin our return to Vermont ahead of the storm.

For several hours we had been working our way slowly around the rugged coastline of Cape Ann. All of the expected wintering sea ducks, grebes, gulls, and alcids were scattered in the cold waters. The diving ducks gave us brief looks before disappearing beneath the surface, then popping back; the drakes occasionally paused in their feeding activities to display for the hens. We had a few unusual sightings - Ruddy Ducks and Ring-necked Ducks on Niles Pond - arctic white Glaucous Gulls here and there.

Beneath the lighthouse at Eastern Point a drake Barrow’s Goldeneye was among the Common Goldeneyes. It was the same location where we had seen a Barrow’s a few years ago on another winter coastal birding excursion. Near Bass Rocks, there was a single drake King Eider. Close to shore, we both had our most satisfying sighting of this rare New England wintering sea duck.

By the time we had reached Halibut Point, there was only one wintering species that we expected to see which was still missing - the Purple Sandpiper. A few other shorebirds may winter in small numbers along the New England coast north of Boston, but only the hardy Purple Sandpiper is to be expected. My friend, a Massachusetts native who has birded this coastline since a young age, led the way across the rocks. “I always see purples here.”

But not this day. We went over the rocks until the entire cove between Halibut Point and Andrews Point was in view and we scanned the entire rocky coastline joining the two points. There were no flickering movements to suggest these high arctic wintering shore birds. Disappointing - but both of us know that there are no guarantees when birding, and this winter has been strange in many ways.

As we turned back, still scanning the rocks for movement, we found a single shorebird roosting on a rock, head tucked beneath its wing. It is easy to identify the birds you expect to see, but we were now looking at a bird we did not expect to see. We studied it through our scopes, noted the speckled sides, the white eye stripe, the dark tips of the primary feathers, the gray tail feathers, the scaly feathers of the back. It had yellow legs, a straight dark bill, and barring on the rump that was just visible between the folded wings.

A Red Knot. But what was a Red Knot doing on the Massachusetts coast north of Boston in the winter? Red Knots winter in southern Argentina. They are famous for their epic migration journeys - 20,000 miles in round trip flight each year, from Tierra del Fuego to the high arctic and back. We returned to the car, checked our field guides to confirm our identification, then made the half mile walk back to the rocky shore with a camera. The knot had not moved. I collected digiscoping images for documentation. Moving to within twenty feet of the resting bird, it finally moved, walked a little; plump as the bird is, perhaps waddled better describes its two legged movement. Then it flew briefly, before returning to its roosting place. The flight allowed a look at the wing patterns, further confirming the identification. We backed away. The bird was so “tame,” so reluctant (seemingly) to move, that we concluded it already had enough stress, and we did not need to add more. Far out of its normal range, this Red Knot was trying to survive a New England winter. It was roosting on a rocky shoreline, where its preferred habitat would normally be open tidal flats and sandy beaches.

Back in the comfort of our homes and while the snow swirled outside, we learned that there are a scattering of winter records for the Red Knot in Massachusetts, and that most field guides show a winter range from southern Massachusetts southward along the Atlantic Coast. Our sighting of the Red Knot was rare, but not unusual.

I read the bird e-mails for Massachusetts. I had seen no sighting reports for the Red Knot, so the next morning, I had our sighting posted. A few hours later, a reply to the posting speculated (reasonably) that our Red Knot was the same bird which had been seen at Halibut Point on the Christmas Bird Count for Cape Ann on December 17. The respondent noted that Red Knots “winter to some extent on the south shore, but rarely north of Boston,” and wondered if this may be the first record for Essex County.

Later in the day, the same writer returned with more information. He had learned that Red Knots used to winter in some numbers in Revere, just north of Boston. The highest count of 130+ knots was recorded in February, 1974.

He found just one previous record for the Red Knot in Essex County. North of Halibut Point is Crane Beach in Ipswich, and yet further north is Plum Island near Newburyport. Both are visible from Halibut Point on a clear day. In mid-January, 1967, 30+ Red Knots were reported at Crane Beach.

Our Red Knot was probably a first year bird. Like many shorebirds, the adults leave the breeding grounds before the young are able to fly. A few weeks later, the young follow. The only guide the juvenile birds have as to where they should go is in their genetic encoding. Many stray, or don’t make the complete journey. A few may end up on a New England coast in winter, where they need to figure out how to feed themselves, avoid predators, and reconnect with their kind in the spring so that they can pursue their purpose in life - transmitting their genes to a new generation. 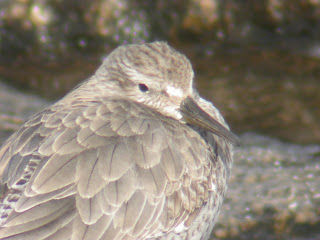 In addition, the Red Knot is facing extreme challenges to its very ability to survive, not just in the struggle for individual survival, but in its existence as a species. Surveys from the Delaware Bay where the birds rest, feed and stage on their northward journey have estimated their numbers at 15,000, a 90% decline in the last ten years. I will return to the endangered status of the Red Knot in a future column.

Forty years ago, almost to the month, a naturalist with a deep rooted love for birds, counted over 30 Red Knots on a northern Massachusetts beach. Last week, a few miles from that same beach, I stood next to his son when his son spotted one Red Knot roosting on the rocky shoreline.

Email ThisBlogThis!Share to TwitterShare to FacebookShare to Pinterest
Posted by Chris Petrak at 8:47 AM