Signs of Spring Are Everywhere

Last weekend’s winter storm notwithstanding, March is the month of Spring’s return. As the dark snow clouds thickened, the change of the seasons was everywhere. Even non-birders will have seen the signs - the curling trails of smoke and rising clouds of vapor from sugar shacks - automobiles thickly crusted with mud - snatched conversations about impassable dirt roads. A mid-March snow storm is a brief hiatus in the calendar’s turn, a temporary pause. Spring is coming ... and the signs are everywhere. 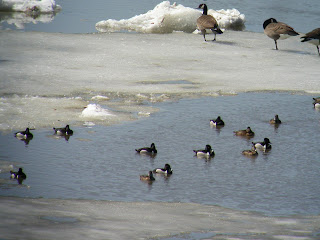 Last Friday, before the snows began, I went out to look at Spring. I gave myself an edge by traveling to Vermont’s tropics - Vernon. In every bare pasture and fallow field, robins were hurrying about, busy feeding. With the robins were the Red-winged Blackbirds ... all males, feeding, yes, but often finding time to proclaim from a tree top their “conk-a-ree” while flashing their red epaulets. They come north before the females to claim their territory.

The blackbirds are one of the surest signs of Spring, and the red-wings are not the only blackbird on the move. On my pre-snow storm Spring survey, dove-sized blackbirds with long keel-shaped tails flew across the road and perched in trees - Common Grackles.

Other smaller, nondescript blackbirds were among the flocks of robins and red-wings feeding in the fields. When these blackbirds were closer to the road or when I paused to scan with my binoculars, I could see the brown heads of the cowbirds. Among North America’s native species, most birders loath the Brown-headed Cowbird; it is a brood parasite, dropping its eggs indiscriminately in the nests of smaller songbirds like the colorful warblers, or songster thrushes, seriously threatening the reproductive success of its hosts. But in March, even the cowbird’s return is noted, because it is a sign of spring.

For the last couple of months, I have known the birds coming to my feeders. When I did my backyard feeder count in mid-February, I knew I would have thirty juncos, twenty jays, twelve chickadees, six titmice, eight doves, six pigeons, four downies, and a pair each of cardinals, nuthatches, Hairy Woodpeckers, and Tree Sparrows.

Last Saturday, with the deepest snow cover of the winter and a four foot barrier built by avalanching roof snow to surmount in order to reach the feeders, signs and sounds of Spring abounded. Red-wings joined the juncos and jays to feed on the seed which I scattered across the top of the new snow. Grackles joined doves on the bulk feeder. Song sparrows scratched beside the Tree Sparrows and squabbled about who was going to eat that seed. And when I stepped outside, I heard the “conk-a-ree” of the red-wing, the “cooooo” of the dove, the “peeer, peeer” of the titmouse, and the discordant songs of the starling. Spring!

Along with the singing of our wintering birds, the large flocks of robins and mixed blackbirds are the most obvious avian signs of Spring to most people. But the signs are everywhere, although you may have to go looking and be alert for them. 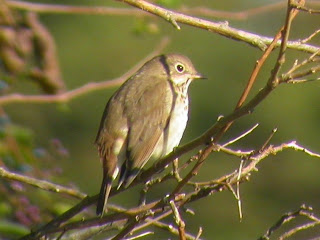 Vermont’s state bird is the Hermit Thrush. Considered by many to be the premier vocalist among our birds, its ethereal, flute-like song carries through our late-Spring and early-Summer woodlands. Unlike the other woodland thrushes, the Hermit Thrush winters in southern North America, sometimes as far north as southern Connecticut. It is the first thrush (not counting the robin and bluebird) to return to our neighborhoods. But during March, this premier songster is silent, moving quietly through woods and thickets. He’s still curious. When I’ve seen movement in a brushy tangle, I’ve sometimes been able to “phish” him into the open where his spotted breast and upright, rufous tail betray his identity.

As the ice goes out of our rivers and ponds and the waters open, waterfowl move north. On my pre-snow storm survey, I found a hundred Common Goldeneyes in the Connecticut River near Stebbins Island. Between dives, the drakes were doing their whip-lash display for the hens. I also saw a couple dozen Hooded Mergansers, although if I had wandered around the old beaver pond with my neighbor I would have seen, as he did, a pair of hoodies in a small pool; they were probably on an early reconnaissance for a hollow tree in a wetlands to use for nesting.

Shorebirds are returning. Two weeks ago friends in West Brattleboro heard the “peent” of the American Woodcock (yes, the woodcock is a shorebird). Secretive and nocturnal - both when it feeds and when it migrates - the woodcock starts to move north from its southern wintering range as early as January. Its migration peaks in March. We can be concerned for the earliest woodcocks to arrive in our woods, especially those caught in last week’s storm. They feed almost entirely by probing soft ground for earthworms. With a foot of new snow and refrozen ground, survival for the earliest arrivals is challenging.

Killdeer are also being reported, although we will not see (or hear) significant numbers until later in the month. I remember one recent winter’s end, when the spring thaw took a long time because of the depth of the snow pack. Only the road edges by the Retreat pastures were snow free, but there were dozens of killdeer working those snow free edges, and dozens more scurrying across the snow fields, as well as the ice on the West River. It is still early to expect to see killdeer in any numbers, but this noisy plover is likely to betray his presence at any time with his strident “keeldee” as he flies over head or dashes across a barren patch of ground - or snow covered pasture.

Humans are diurnal creatures. We have color vision because we are genetically intended to be active during the day and to sleep at night. But if your genes are screwy and you’re active at night, then listen for owls. The Spring breeding season begins as early as February for the Great-horned Owl, and for the Northern Saw-whet Owl and Barred Owl it is swinging into full activity. They are hooting, tooting and calling, seeking mates, defending territory, and preparing to nest.

It is hard to imagine why some birds would be incubating eggs in such (to us) foul weather, but it is undoubtedly timed to the emergence of food sources. With the melting of winter snows, chipmunks, mice, and voles emerge from their winter quarters, sometimes atop the remaining snow, or just beneath the matted, and now snow free, grasses. Many birds return. And all of life seems distracted with the advent of the breeding season. There will soon be much food available for the soon to hatch owlets.

So too for the eagles, whose nesting seems timed to coincide with the running of the shad and salmon. Last Friday the Vernon/Hinsdale eagles appeared to be incubating. Where early in the week they were observed moving sticks about their aerie - some last minute nest remodeling - with the approaching snow storm one was seated deep in the nest, a sign that an egg had been laid.

It’s Spring! Forget the snow. The signs of Spring are everywhere!

We did have quite a few Hermit Thrush in our local Christmas Count this year.-
I am also seeing a lot of Ring-necked Ducks in our area at thsi time.-I'm still fairly new to birding and really enjoy seeing the winter/spring ducks that come in.