Life Birds in a Southern Forest

We were out of bed at ten minutes to five. We brewed the coffee provided by the hotel, filled our mugs, and were on the road by a quarter after. Twenty miles north of Wilmington, North Carolina, was the Holly Shelter Game Preserve. We turned in the dirt road and drove a half mile before parking near an empty camping area.

We listened again to the song of the sparrow - one of two “target” birds - a long clear note followed by a slow musical trill. Then we were out of the car. The air was chilly. The clear sky was orange with the early sun whose light was just touching the top of the pines. We finished our granola bar breakfast, tipped the last drops of coffee out of our travel mugs ... and listened.

A titmouse repeated his courting song - “peeer, peeer, peeer” - robins rattled from many directions. Sunlight moved down the longleaf pines bringing enough warmth to stimulate a Pine Warbler into his even pitched trill. Eastern Towhees called their “che-winks,” and now and then one limbered his vocal cords with a partial song, and abbreviated “drink,” or “drink your” - not quite ready to sing his full “drink your teeeeeea.” We continued to listen to the awakening stir of life in the southern pine savannah. 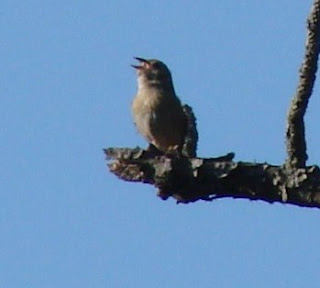 At 6 am, a long musical note drifted down the road, followed on a different pitch by a rapid trill. “There’s the Bachman’s Sparrow!” We headed down the road. The sparrow continued to sing from the mid-branch of a pine ahead of us, then to our side, then slightly behind us. In a primitive way, we had triangulated his location, and began looking more intently for movement. He did not move, but on a branch about thirty feet up his dark profile showed against the clear, morning sky, quivering as he broadcast his song.

At 6:10am, we watched the uncommon Bachman’s Sparrow - large, long-tailed, plain brown and nondescript. But a sparrow with a song rivaled only by the plaintive “pooor, sam, peabody peabody peabody” of our northern nesting White-throated Sparrow. Bachman’s Sparrow prefers dense habitat where it forages on the ground and is seldom seen. Maybe a glimpse can be had as it runs beneath its cover, or makes a short flight when flushed before disappearing again.

But in the Spring, the males sing from a high perch in the lower branches of a pine, repeating their song over and over and over from the same place. And that was one of the reasons we were in this pine savannah on a cool Spring morning. 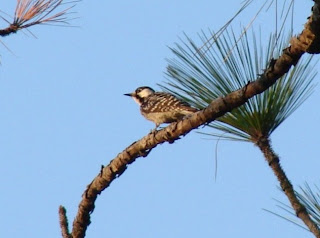 The other reason was the Red-cockaded Woodpecker. This rare and endangered species lives in contiguous, open, mature pine forests in the Southeast. Development and lumbering has severely reduced the amount of mature forests available for this woodpecker, or has fragmented the forest that remains. As a result, this woodpecker is in trouble.

The good news for a birder is that the Red-cockaded Woodpecker is a colonial nester. Where there is one nesting pair, there are likely to be others. Kaufman describes their nest: “Preferred sites are cavities excavated in large live pines infected with red heart fungus (which gives tree a soft center inside a solid outer shell). Cavity usually 30-40 feet above ground, can be much lower or higher (to well above 100 feet). Entrance surrounded by tiny holes from which sticky resin oozes out, protecting nest from climbing predators.”

As an endangered species, this colonial nature and these nest characteristics make it relatively easy for biologists to study the Red-cockaded Woodpecker. Also as an endangered species, it is intensely studied. In the Holly Shelter Game Preserve, a nesting colony was situated about a mile in from the highway. Nesting trees were marked with broad, white painted stripes.

I should explain how we came to be in this particular place. In negotiating our Spring vacation along the Atlantic coast, my spouse insisted that we not bird all the time, and that her interest in the Civil War be honored. In turn, I would target our birding to finding these two southern species, Bachman’s Sparrow and Red-cockaded Woodpecker. I studied guides to birding places and had a significant list of places we would visit in search of these species (and which would provide a significant amount of birding on the trip). About a week before we left, I mentioned my target species to Al at an Audubon meeting. A couple of days later he received an e-mail from a friend who had just seen both species. Al forwarded the e-mail to me. The e-mail described “one of the best places to observe the endangered Red-cockaded Woodpecker” and gave precise directions for accessing the game preserve and finding the woodpecker.

And that is how it happened that my first stop for these targeted species was in this game preserve north of Wilmington, North Carolina. We watched the Bachman’s Sparrow for about ten minutes, until something caused him to fly off. Then we turned our attention to searching for the Red-cockaded Woodpecker.

In addition to nesting colonially, this woodpecker often forages with its family and neighbors. We had stopped during the late afternoon the day before, but had seen and heard very little beyond the ubiquitous song of the towhee. But in the early morning, the birds are active and often feed together. So we began to prowl slowly and quietly in the vicinity of the marked nesting trees. We were looking for a woodpecker midway in size between a Downy and a Hairy, with a stout beak like a Hairy, a prominent white cheek, otherwise entirely black with white spots, and an invisible red “cockade” back of the male’s eye. 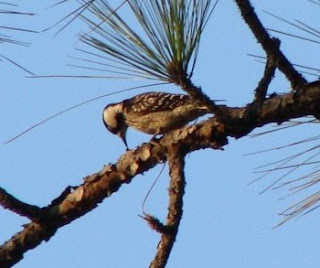 Southern pine savannah is open forest with trees widely spaced and little undergrowth. We could search for movement across wide areas. We scanned and watched and listened. With binoculars on her eyes, my spouse said, “There it is.” I followed her line of sight to a plain woodpecker with a white cheek on the side of a pine. It was 7 am, and we had just seen our second life bird for the day. Others in the family group were stirring to activity and we had long and satisfying views of this endangered bird.

It was early and so we turned our attention to the other bird life coming alive - a Common Nighthawk peenting overhead, doing his aerial display by diving steeply then pulling up with a booming sound. A Long-eared Owl called distantly. Pine Warblers and Prairie Warblers singing from trees tops and thickets. A Summer Tanager, bright red, led us through the oaks, scolding with his “pikituck.” Brown-headed Nuthatches worked the tree trunks. Always the towhees were singing and the Carolina Chickadees calling.

By 9 am, this first day of May was beginning to feel like a mid-summer day. We shed clothing, rearranged the car, and resumed our travels. We had had a full day of very good birding.

Email ThisBlogThis!Share to TwitterShare to FacebookShare to Pinterest
Posted by Chris Petrak at 7:09 AM
Labels: Bachman's Sparrow, Red-cockaded Woodpecker

Sounds like a good compromise with your wife that avoids a civil war in your household and you still get to do some birding!
Vern