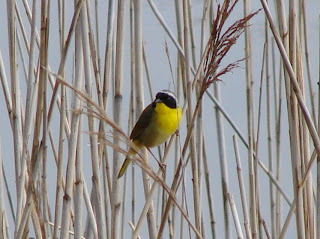 A small brown bird flew across the narrow road, its flight and profile different from the ever-present Song Sparrow. It grabbed onto the top of a brown grass stalk. I grabbed my binoculars, hoping for a brief glimpse of the secretive Sharp-tailed before it dropped out of sight. The brown-backed bird turned, and I saw a bright yellow breast. From the side of its head, across both eyes and brow, it wore a black mask. He quivered with attention as he surveyed his neighborhood, then sang out with “witchity-witchity-witchity.”

In the moist, young forest along the Delaware River in Pennsylvania, I heard several warblers and vireos singing and calling in the brushy understory and the canopy overhead. They were moving slowly as they foraged among the leaves. Glimpses were brief, only enough to know that a bird had gone to a new perch or new branch. Softly, I tried to call them down - “phish, phish, phish.” The strange sound will sometimes attract the birds. But this day, they were unimpressed and out of sight.

I tried again - “phish ... pish ... pish.” There was movement in the bushes. I watched and saw movement again. My binoculars focused on the small bird whose curiosity got the better of his hunger, or caution. He wore a black mask above his yellow chin and breast. He chipped loudly as he checked out the disturbance, then dropped into the thick protection of the bush. From deep in the tangle, I heard “witch-i-ty ... witch-i-ty ... witch-i-ty.”

Across the road near my home are the remnants of a pasture edge - a few tall young maples and oaks rise above the melange of cherry, honeysuckle and other small trees and bushy plants. Walking along the road, I heard a Chestnut-sided Warbler singing from a tree top. I saw him moving along a branch that had not yet fully leafed out. He paused, lifted his head and sang his “pleased-pleased-pleased-to-meetcha.”

Watch the behavioral antics of the black-masked Common Yellowthroat, and you might think you are watching a wren. He has the cocked-up tail, the quivering intensity, the curiosity and pugnacity that is commonly associated with the wren family - all of which is markedly uncommon in the warbler family.

The Common Yellowthroat is a very uncommon type of warbler. He doesn’t seem to know what he is supposed to be. But then neither did the early naturalists; they named him Geothlypis trichas; the elements of the name mean successively “earth,” “a kind of finch,” and “a thrush.” Those early naturalists got it wrong, but the rules of scientific nomenclature require that their mistakes be perpetuated. Only the “geo” (earth) part is partly correct; the Common Yellowthroat usually nests very close to the ground.

As ubiquitous as the Common Yellowthroat is (there is hardly a day of birding during the summer when I don’t see or hear him) he is my favorite bird. When he pops out of the thicket and complains about my intrusion on his peace, I can only smile ... and apologize for having disturbed him.

At dusk early this week, I heard the “tu-tu-tu ... tu-tu-tu” of a Black-billed Cuckoo. Stalking the sound, I determined that it was coming from somewhere in the mid-branches of a maple tree. I peered into the dark branches, circled around the tree, searching for bird, but the fading light of the day rendered the search futile. My bare feet chilled from the early dew on the grass, a contrast to the humid warm air of the evening.

“Not much tonight, my friend,” I answered.

The birding is always good when the black-masked Common Yellowthroat is around.

Email ThisBlogThis!Share to TwitterShare to FacebookShare to Pinterest
Posted by Chris Petrak at 7:29 AM
Labels: Common Yellowthroat