The Hammering Life-style of Woodpeckers 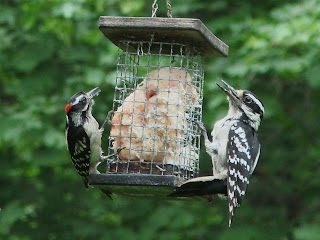 Unless ... you are a woodpecker. Then you make your living by banging your head against hard surfaces. If you are a woodpecker, you bang your head (in a manner of speaking) when you are hungry, when you need a place to stay, and when you want sex. But unlike the rest of us who get headaches when we bang our heads, woodpeckers are equipped for such activity. The brain case is larger than would be expected and frontal bones are heavier and folded at the base of the bill, enabling them to absorb the shock of the hammering. Heavier muscles behind the bill also act as shock absorbers.

Woodpeckers dine primarily on insects. They search for them in bark and wood, and sometimes in nuts, or crops such as corn. Their tapping may be heard throughout the year as they excavate insects from crevices with their bill and lap them with their long tongue.

Woodpeckers are cavity nesters, but they’re picky about their cavities. They make their own, usually spending about two weeks on the excavation. They make a new cavity for breeding purposes each year. Often they make a second hole for roosting during fall and winter.

Foraging and cavity excavation involve beating on wood, but the beating is slow and deliberate. During the spring and early summer, however, the beating on wood takes on a different character. Then it is likely to be fast and is the primary means by which woodpeckers communicate.

Both males and females drum. Their drumming establishes territory, and attracts a mate. It is the equivalent of a songbird’s song. During the spring rituals, woodpeckers will drum on wood which has good acoustic qualities, a branch or trunk that is hollow and which amplifies and reverberates their drumming. A pipe or rain gutter may serve the same purpose. The key is that the sound carry over a distance. I remember one spring when I was awakened early every morning by a sapsucker drumming on a neighbor’s metal mailbox.

Some astute listeners claim they can identify local woodpecker species by the way they drum, but in most cases I am skeptical. What a woodpecker chooses to drum on and how far away the drummer may be effect how a listener is going to hear the drummer. A Downy Woodpecker drumming on a hollow branch overhead may make one think that a much larger Hairy Woodpecker is doing the drumming. The pattern of drumming among many species (locally the Northern Flicker, and Downy and Hairy Woodpeckers) is so similar that visual identification is the only reliable way of knowing which species is doing the drumming.

Among our local woodpeckers, the exception is the Yellow-bellied Sapsucker. The sapsucker’s drumming begins fast, then slows down, as though it were running out of steam.

When woodpeckers are foraging or drumming, their hammering only involves the head and neck muscles. Then the head banging is relatively benign. But when they are excavating a cavity, they put their whole body into the effort. I once spent about twenty minutes sitting on a hillside in a hemlock forest watching a Pileated Woodpecker making a cavity. Every time it hammered, it was a full body strike, and the force was so great that the chips went flying. What I could not see were other adaptations that allowed for such activity. Woodpeckers which do a lot of excavating (Downy, Hairy, and Pileated) protect their nostrils from flying sawdust with feathers or by hiding them beneath a ridge. Just before their bill strikes, they close their eyes.

The woodpecker bill is also adapted to their hammering lifestyle. Think of the pointed tools in your shop, and how they tend to get stuck in the wood. The same would happen with a pointed bird bill. However, the woodpecker’s bill is chisel-shaped and exceptionally sturdy. The Pileated Woodpecker prefers to forage on hard wood trees; as you might expect, it has the stoutest and straightest bill to allow it to hammer without damaging the bill.

Most woodpeckers have two toes forward and two back to enable them to cling in their characteristic horizontal position. When climbing, one of the back toes can rotate to the side. Their upright position is assisted by relatively short and very stiff tail feathers. When molting, those tail feathers are replaced gradually so that the bird is never lacking in the tail support which it requires. By contrast, in late summer it is not uncommon to see a tailless songbird, one which has molted all of its tail feathers. I’ve seen tailless cardinals and sparrows this past week. 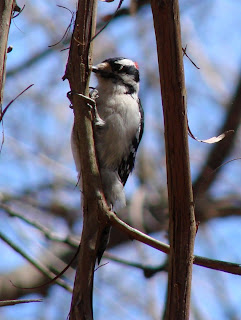 In southeastern Vermont, we have six species of woodpeckers, four of which are year round residents. The Downy Woodpecker is the smallest woodpecker and is common almost anyplace that has trees. The Hairy Woodpecker is fairly common; it looks like the Downy, but is half again as big, and requires bigger trees. The Pileated Woodpecker is our largest North American woodpecker (except for the Ivory-billed Woodpecker). As New England forests have recovered and mature, the Pileated Woodpecker has also recovered, but must still be called uncommon. Mainly a bird of mature forests, it will appear in town if there are big trees. The Red-bellied Woodpecker is a new arrival. The first confirmed nesting in Vermont occurred in Brattleboro in 2001. Its numbers have been increasing steadily, but it is still uncommon.

We have two migrant woodpeckers. The Yellow-bellied Sapsucker winters in the south and comes north to our northern forests to breed. It is common in our deciduous and mixed forests during the spring and summer. The Northern Flicker generally withdraws from its northern range during the winter, but may be found year round in nearby Massachusetts and Connecticut. It is occasionally reported on the Brattleboro Christmas Count. It is fairly common from deep woods to town lawns, although there is some evidence that its numbers are declining. The flicker is the least woodpecker-like of the woodpeckers; it often forages in robin-like fashion on the ground, or hops along in search of its favorite food - ants.

More about woodpeckers will have to wait until next week. I’m hearing a lot of woodpecker chatter through my study window. The Downy family is complaining that I haven’t put out the suet feeder this morning. So I’d best do that before they start hammering on the shutters.

Email ThisBlogThis!Share to TwitterShare to FacebookShare to Pinterest
Posted by Chris Petrak at 9:28 AM
Labels: Woodpeckers