The Differences among the Woodpeckers 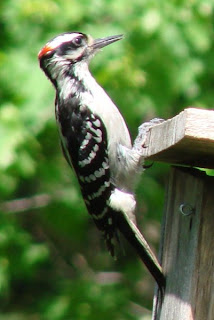 Six woodpeckers breed in southeastern Vermont. All six have been in my backyard. The Pileated Woodpecker, a species of mature forests, has made a couple of brief stops. The Northern Flicker occasionally forages in robin like fashion on the grass. The Red-bellied Woodpecker, a relatively new breeding species in Vermont, has made a few Spring visits, perhaps in search of a potential breeding territory.

Nearly all woodpeckers are sexually dimorphic. This means, simply, that males and females have two different forms. This difference is most observable when the dimorphism is dichromatic; that is, when there are color differences in the plumage for males and females. For many species of birds, distinguishing between the sexes is almost impossible. The plumage of Blue Jays and chickadees is the same for both sexes; during the breeding season an experienced bird bander may be able to see physiological evidence which will identify the sex of a bird in the hand. Outside of the breeding season, dissection may be only the sure way of distinguishing the sexes, but this technique is a bit difficult on the bird.

Females usually incubate the eggs; if we observe a Blue Jay sitting in the nest, we may be able to conclude that we are seeing the female, and we may be right most of the time. Such a conclusion, however, is based on probability, not on verifiable evidence, unless we are somehow able to examine the bird in hand. Most of the time, we must simply be content with knowing that the birds know who is what. In general, birds which are not sexually dimorphic are two parent families, with both parents taking an active part in raising their young.

By contrast, many of our favorite summer songbirds are markedly dimorphic. Think of the stunningly beautiful male Indigo Bunting and the plain jane female - likewise with the Purple Finch, and the Rose-breasted Grosbeak. The plumage differences are less dramatic but very evident with birds such as the Northern Cardinal, American Goldfinch, Baltimore Oriole, and nearly all of the warblers. In general (but with lots of exceptions) the handsome male keeps singing, protecting his territory, and mating as often as possible, while the female does the parenting duties without much help. 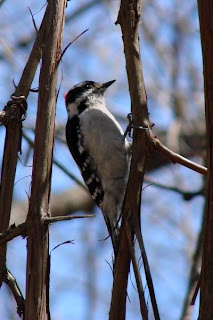 Our six resident woodpeckers are all sexually dimorphic, and distinguishable by plumage differences between the male and the female. These differences in plumage are slight, but clearly observable. For example, the male Yellow-bellied Sapsucker has a bright red cap and a bright red throat. The female’s throat is white. The male Northern Flicker has a black mustache; the female does not have the mustache. The male Red-bellied Woodpecker has a bright red stripe over the top and back of his head; the female has less red, usually only on the back of the head. Both the Downy and Hairy males have a bright red spot on the back of their heads; the females do not have the red spot.

In my backyard there is lots of opportunity to watch woodpeckers, and much opportunity to observe the differences. The Downy and Hairy are the two most common. Their plumage pattern is almost identical. The Hairy is larger (9 inches verses 6.5 inches); the Hairy’s bill is much longer and larger. The Downy’s bill is short, almost petite. The juveniles of both species appear to be smaller than their parents when they have first fledged, with the result that the sizes between the two species almost overlap. Juvenile Downy and Hairy males have a rusty red crown rather than the red spot on the back of the head of the adult males; juvenile females do not have any distinctive plumage differences but can usually be identified, as so many young, by their cluelessness. 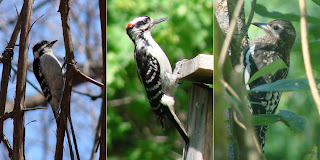 The Downy and Hairy both have a large white patch on their backs. The similarly sized Yellow-bellied Sapsucker has a long white stripe on its folded wing. This white side stripe makes it possible to identify the sapsucker as it works its way along a tree trunk, even when no other field marks can be seen. The juvenile sapsucker also has this white wing strip, but its head is mostly brown.

Year round, all woodpeckers forage for insects hidden in bark, but they also eat fruit, berries, and seeds. The Downy and Hairy are especially fond of suet, but will also take seeds from a feeder. As with most species, woodpeckers may have a preferred diet, but when times are lean, they will include in their diet whatever food is available.

Insects are the principle component in the diet of all of our woodpeckers, including the sapsucker. The sapsucker does drink tree sap (the little round holes on a tree trunk are evidence of its activity), but like all animals, it needs protein. On several occasions, I have seen a sapsucker carrying a beak full of insects back to its nest hole. On the other hand, the Downy Woodpecker will also drink tree sap on occasion, especially maple sap in the early spring; this led to its folk name, Little Sapsucker. The Hairy Woodpecker was similarly named, Big Sapsucker.

The common names of our most common woodpeckers make little sense. The Downy and Hairy were named by naturalists with the bird in hand. They apparently felt that the feathers of the Downy were soft and downy, and that the feathers of the Hairy were shaggy, rough, and hairy. But in the field, the Downy does not look downy and the Hairy does not look hairy. Likewise, the less common Red-bellied Woodpecker seldom shows its red belly except in the hand. 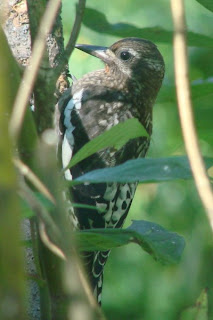 On the other hand, the Yellow-bellied Sapsucker does have a yellowish belly, and the eastern “yellow-shafted” race of the Northern Flicker clearly shows yellow feather shafts under its wings when it flies. At least the Pileated Woodpecker, with its prominent red crest, is named for a field mark which we can all see. “Pileated” derives from the Latin for “crest,” although with few us having studied Latin, we would only know this if our curiosity sends us to a dictionary. Curiosity sent me to the dictionary, and a bunch of other resources. And I’m glad to share with you.

Thank you for the interesting post on woodpeckers. Like you, some of my best birding moments have been sitting quietly and letting the birds come to me.
Vern

Great read, thank you! I've a question though if you know the answer: what's the difference between a woodpecker and a flicker?