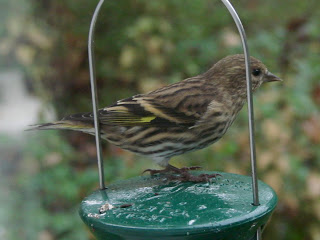 Goldfinches in camouflage - that’s how one field guide describes the little brown jobs (LBJs) which have been visiting my feeders in large numbers the last few weeks. The Pine Siskin is almost identical in size and shape to the familiar American Goldfinch. The two species often flock together. From a few yards away, it is very easy to miss the Pine Siskin among the olive drab winter plumage of the goldfinch. A casual glance at the dark wings and wing bars make you think that there is only one species, not two. But then you notice that some of the birds in the flock are buffy and unstreaked on breast and back, and others are very streaked, and you realize that there are two different birds which are consuming your sunflower seeds in such quantity.

Or you may see sparrows and female finches busy on the ground around the feeders; these are the birds that define “little brown job” and are so confusing to many observers. But one of them is hoping on the ground in a way that suggests it is not comfortable scratching among the leaves. Or you notice that it is slimmer than the usually robust looking sparrows. It does not have any prominent head markings, and its beak is sharply pointed. When you finally get your binoculars on this LBJ you might notice that there is yellow along the edge of the wings and tail. You are looking at a Pine Siskin.

Pine Siskins are odd little birds. Forbush summarizes their behavior: “The Northern Pine Siskin is almost as erratic as the crossbills. During every month in the year small flocks wander about as if there were no such thing as a breeding season, and individuals may be seen occasionally in summer far south of their usual breeding-grounds. They may breed one year in a certain region and far away the next, and in migration or in winter they may visit a locality in great numbers in one year and pass it by the next.” 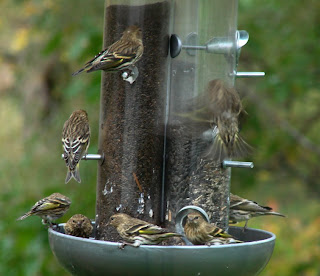 This year they are at my feeders in great numbers, often outnumbering the goldfinches. In my backyard, this is a banner year for the siskins. I have been doing an informal poll of other bird watchers to find out if they are also having large numbers of siskins. At best, they have answered, “A few.” More likely they tell me that one visited once, or a couple occasionally. So far in my polling, Pine Siskins are not being reported in unusual numbers, except in my backyard.

Looking back through my notes, I have managed to see the Pine Siskin every year, but in many of those years, the numbers have been very few. On the other hand, they occasionally hang in large numbers where I happen to be. There is no apparent predictability.

I remember one Spring listening to the finches singing in the trees around my home - jumbled, varied, twittering notes celebrated the melting snow and warming temperatures. Occasionally I scanned the trees and picked out a male American Goldfinch in his fresh yellow plumage. But more often I noticed that the twittering song was interrupted suddenly with a rising “zzshrreeeee,” - then the twittering resumed. Most of those singing finches that early Spring were siskins. Every Spring since, I have listened for the cheerful song that is suddenly interrupted, but have heard it only occasionally.

The American Goldfinch and the Pine Siskin are closely related. Both are classified in the Genus Carduelis, from the Latin for “thistle.” Thistle is presumed to be the favorite food of these birds, and both species have been filling the perches on the thistle feeder in my backyard. The siskins that cannot find a perch contentedly scarf the sunflower seeds in large quantity.

The thistle blooms late in the late summer, and this is sometimes used to explain why the goldfinch is one of the latest nesting bird. Generally, they do not begin to get serious about their breeding responsibilities until late June or early July. I remember years ago finding an occupied goldfinch nest in an apple tree in late September. Presumably the goldfinches postpone their nesting until their favorite food becomes available.

But life in nature is never quite that neat and simple. The Pine Siskin, also a “thistle bird,” begins its breeding season in late March or early April. For such a small bird, it builds a relatively large nest, lined with hair, fur, feathers, and other fine materials. It may be that this fine lining serves as insulation against the harsh weather still common in the northern latitude pine forests where the Pine Siskin nests. One study suggests that they feed their young mainly on aphids, and another study has shown that various insects figure prominently in their diet. This is only what would be expected, especially during the rearing of young with their heavy protein requirements. In nesting early, the siskins are relying on the insects which also emerge early in the year.

Pine Siskins wander widely in the pine forests of the north, and as a consequence, there is much about these birds that is still uncertain. Bent, in his 1968 Life History, is uncertain whether they double-brood. Thirty years later, Baicich and Harrison still can only say, “Possibly double-brooded.” Siskins follow their own time-table. I am quite sure that they understand when and where they breed, but science is still trying to puzzle it out.

This year I saw my first Pine Siskins on a mountain top in mid June. I don’t know where they were in their breeding cycle - at the end, or just beginning, or starting over again. That they were breeding on the mountain top, I am sure. They prefer the northern pine forest, and that habitat stretches south along our mountain tops. 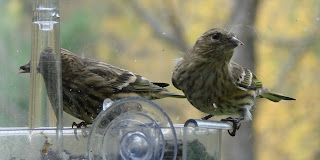 Once breeding is concluded, the siskins move southward in a pattern that is completely unpredictable. In our neighborhood, southward may mean nothing more than moving from higher elevations to lower elevations. When the first siskins started showing up in my backyard in early August, they were probably the mountain top birds coming down to the valleys.

What about the siskins covering the thistle feeder perches now? When I reported this to another birder, his response was, “This could be a good finch year.” Every so often, the northern finches irrupt southward. Poor seed crops in northern Ontario have led some field ornithologists to predict that this will be an irruptive year. So my siskins may be the vanguard of the winder finches.

The Common Redpoll (also Genus Carduelis) is fairly predictable; it usually appears in the northeast every other year. The Pine Grosbeak is less predictable. It has not been reported on a Christmas Count for several years. Many feel it is due. And the crossbills - they are about as erratic as any of these finch family birds. A report of large numbers of siskins at backyard feeders is grasped by some as a harbinger of winter finch sightings to come. I know one birder who is already twitching at the possibility.

Email ThisBlogThis!Share to TwitterShare to FacebookShare to Pinterest
Posted by Chris Petrak at 8:48 AM
Labels: Pine Siskin, winter finches

Talk of a Pine Siskin irruption is all the rage, isn't it? The reports are pretty widespread and very encouraging. Thanks for a great post.
Here's mine on Pine Siskins.
http://wildbirdsunlimited.typepad.com/the_zen_birdfeeder/2007/10/are-we-in-for-a.html

Nice post. Just the other day I got my first good look at Pine Siskins for the first time in serveral years. I mentioned and placed a link of this post on my post about "How I Got My Siskins."
Vern