Vultures Are Storks, Not Hawks 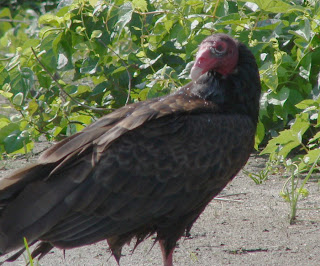 I don’t know anyone who would list the Turkey Vulture among their favorite birds. The Turkey Vulture is big. It is ugly. It has disgusting habits. It feeds entirely on carrion - dead meat, usually thought of as rotten and rancid. The Massachusetts ornithologist, Edward Forbush, described the buzzard (as it is known in folk-circles) as a “cowardly fowl .... They often gather, not only about dead animals, but also about the sick or disabled when death seems imminent. If the death of the victim seems assured they approach their prey. Over what follows let us draw the veil.” He refers to their diet as “filthy cargo,” “foul matter” and “malodorous decaying bodies.” Some four hundred years ago, the habits of vultures gave to our language (according to the Oxford English Dictionary) a noun which could be applied to “a person of vile and rapacious disposition.”

There’s not much in the way of endearing qualities to be found in the vultures.

But ... as masters of the air, the vultures have few equals. The soaring buteos, such as the Red-tailed Hawk, receive good notices as they ride the wind currents. Flocks of people gather on ridges and hill tops when the Broad-winged Hawks are at their peak during Fall migration. The feathered flocks kettle upward on invisible thermals with scarcely a movement of their wings - dozens of birds, in some places hundreds and even thousands - drawing oohs and aahs from the spectators below as they ride the currents, and then stream southward. Few people pay much mind to the nearby Turkey Vultures. 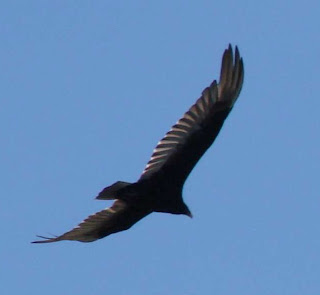 Yet the TVs, as they are cryptically known, could give flying lessons to most of the raptors. They are aloft when the thermals and winds are so weak that the buteos are grounded. With broad wings and a wingspan of five and a half feet, they can capture the faintest of rising thermal and the gentlest of air currents. At four pounds, they are relatively light. They fly with their wings in a “V”, or dihedral. They tip and teeter on their way, like an uncertain tight-rope walker. In heavy winds, they rush through the air, in total control. In the same winds, the smaller hawks are buffeted, and struggle to maintain control of their flight, or perhaps give up entirely and perch until conditions are calmer.

Turkey Vultures, along with the other New World vultures, are popularly grouped with the diurnal raptors - the day hunting birds of prey like the falcons, eagles and hawks. But scientists have long suspected that the relationship may be something very different. New World vultures, for example, have toes which are distinctly different from other birds of prey; the hind toe is small and weak. As such, they cannot carry away their food. When on foot, they are gawky, hopping clumsily. This is very different from the powerful toe and sharp talons of the hawks, which allow them to carry food, but not to walk with any grace.

DNA studies have finally confirmed what scientists have long suspected, with the result that our New World vultures have been reclassified. They are now known to be closely related to storks, and not to any of the hawks nor even the Old World vultures, which are classified in the same order as hawks. Like storks, New World vultures cool their relatively long (and un-hawk-like) legs by defecating on them, which is what gives the vultures the appearance of having white legs. The cooling is affected by the evaporation of the liquid in the feces. (This is yet another of the less appealing characteristics of our vultures.) They also have a vestige of webbing between their toes, suggesting that they once waded in muddy ponds like the storks. Unlike Old World vultures, the New World vultures do not build stick nests, do not have true vocalizations (they lack a syrinx and can only hiss and grunt), and do not nest colonially. The similarities between Old World and New World vultures, such as bald heads, beaks which can tear meat, and regurgitating food to feed young, are the result of what scientists call “convergent evolution.” These adaptations for feeding on carrion evolved independently. 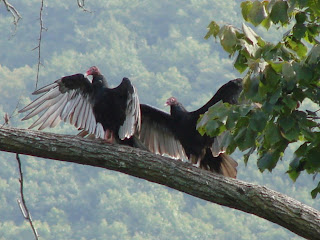 When I lived in Pennsylvania, the pine trees across the street from my home were a roosting place for Turkey Vultures in the late Fall. In the waning afternoon sun, they drifted in from all directions, the low rays turning these big black birds into golden brown. They settled into the tree tops where they were all but invisible, but still wary and skittish. A nearby barking dog might spook them into flight, and then the trees seemed to come alive with the thunderous flapping of wings. In the morning, they perched on the leafless branches of the maples and oaks, their wings open to capture the warmth of the morning sun. Then they lifted off and were gone for the day. Until one day in November day, they did not return at night, and were gone for the season.

A few years ago, I was in southern New Jersey in early November, having wiggled my way into a group of hawk banders who were spending a week as volunteers with the Cape May Bird Observatory’s hawk banding project. Bird movement was quiet when we first settled into the blind in the early morning. But as the fog slowly burned off and the air began to warm, large birds started to rise out of the distant trees. Through the morning, I watched and photographed several kettles of these birds. In mid-September on Putney Mountain I would have known with a certainty that these kettles were flocks of Broad-winged Hawks. But the Broad-wings were long gone to the tropics. The weak rays of the late year sun warmed the air but the warmth was fleeting. Yet the birds in those November kettles circled steadily higher and higher. The rocking of their large, v-shaped wings were subtle adjustments to barely moving air currents and feeble thermals. The Turkey Vultures were moving southward.

A week later at home, I carefully marked the photographs of the Turkey Vulture kettles, so that I would not confuse their black dots with the kettles of Broad-winged Hawks I had photographed in September. Two months separated the buteo kettles and the vulture kettles. The Turkey Vultures can migrate with much less help from the thermals and ridge deflected winds than the broad-wings. They are masters of the aerial currents.

As a raptor educator at Hawk Ridge in Duluth, MN, I've been teaching about the vultures' raptor/stork classification for a few years now, but this fall I was sent the following, an excerpt from the AOU. I'm not aware of the date on it... perhaps your info is more current than this:

FORTY-EIGHTH SUPPLEMENT TO THE AMERICAN ORNITHOLOGISTS’ UNION
CHECK-LIST OF NORTH AMERICAN BIRDS
p. 51. Reconsideration of the evidence for moving the family Cathartidae from the order Falconiformes to the order Ciconiiformes (AOU 1998), re-evaluation of the analysis of Griffiths (1994), and preliminary information from continuing genetic studies (e.g., Cracra et al. 2004, Fain and Houde 2004, Ericson et al. 2006) indicate that the move was in error, although the true relationships and thus placement of the family are still not fully resolved. Move the entries for the family Cathartidae and the included species (pp. 51-53) to a position in the Order FALCONIFORMES just before the Suborder ACCIPITRES (p. 86) under the heading Suborder CATHARTAE: American Vultures. Under the heading for the Family Cathartidae, insert the following: Notes.—This family was moved to the order Ciconiiformes (AOU 1998) but is now tentatively returned to the order Falconiformes after re-evaluation of the reasons for the earlier change. Further, some genetic studies (Cracra et al. 2004, Fain and Houde 2004, Ericson et al. 2006) have shown that the New World vultures are not closely related to the storks, although their precise phylogenetic relationship to the Falconiformes is yet undetermined.

If you have any further info, please let me know!

Very nice information what you have shared about Turkey Vulture. Its great to see that you are sharing very interesting point here... Thanks...

I have not heard about the Turkey vulture before, and saw their photos the first time here.. Animal channels like the Animal Planet never mention them!

So, here I am in Nov 2019 having just started birding a couple of years ago. TV's are at my palm trees every day for three years. Usually 10 or so, sometimes 40, they apparently enjoy a snack of dates before sleeping in the other palm trees a half block away. I have labeled my address as a stakeout for TV. They are, of course, easy to spot along the foothills of Los Angeles probably any day of the year. Their roosts are much more rare. There is a study in Irvine of vultures. I have an occasional visitor with wing band 3Y. Otherwise, I have not been able to identify any one individual. Oddly, I see 3Y about every 5 or 6 weeks. He'll drop by for a day or a week and then it's gone for 5 or 6 weeks. Can you imagine if all of these behave that way. I once pictured and counted 60 in a kettle. I remember stopping my car for a picture and talking with a couple professional road bikers whose team was renting nearby. I find it all bizzare, but perhaps fortunate since I have been passionate about birding since researching them. They also attract very rare raptors into the neighborhood, from the zone tailed hawk that hung out last year for a couple weeks to the regular sighting of a pair of peregrines who engage the TVs rather aggressively. I'm in the heart of Monrovia hillside neighborhood. The TV descend from the high mountains into the foothills every evening. They then snack on my dates, crap of my front steps, the sleep on the street palms where they defecate over an entire cars. If you are foolish enough to street park. I hear hanging a dead one scares them away. I think there are a few too many witnesses and laws here in the middle of our suburban LA neighborhood.

And the Caracara or Mexican Eagle is a falcon, though it behaves like a vulture and feeds with them. And in Texas they're all Buzzards (Ok, no, they're not, but I have seen signs posted in state parks that identified them as buzzard. They should know better.