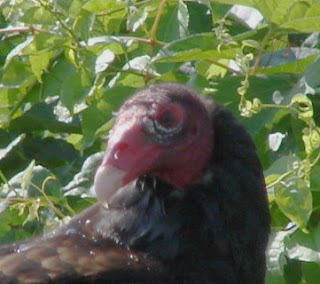 The Turkey Vulture is not one of my favorite birds. Like most people, I prefer the cuteness of the chickadee or titmouse, the comic antics of the nuthatch, the gaudiness of the Wood Duck or Harlequin, the majesty of the Bald Eagle, the power of the stooping Peregrine, the ethereal song of the thrushes, or the sheer endurance and metabolic efficiency of a long distant migrant, like the Blackpoll. The Blackpoll burns fat reserves in its one ounce body during a 2000 mile journey across open ocean at the equivalent rate of an automobile which would get 750,000 miles per gallon.

Nevertheless, the Turkey Vulture is a much maligned bird, and the victim of what can only be called ignorant and irrational prejudice (if you will excuse the unnecessary and redundant adjectives).

First, some background. The Turkey Vulture is a relatively new arrival in New England. In the first half of the nineteenth century, Audubon knew of the bird in New Jersey, but did not know anyone who had observed it in New York. The same was true in Massachusetts and Maine. “On my later northern journeys,” he wrote, “I nowhere saw it. A very few remain and spend the winter in New Jersey and Pennsylvania, where I have seen them only during summer, and where they breed. As we proceed farther south, they become more and more abundant.” In the early twentieth century, Forbush had occasional reports of the Turkey Vulture in New England. Today they are widespread throughout Vermont. Locally. thirty to fifty birds congregate around the Retreat Meadows in Brattleboro from Spring through Fall. In winter, they can be found in southern Connecticut. Although increasingly common in our neighborhood, I know no one who waxes eloquent about their presence.

Occasionally in our history, Turkey Vultures have been protected. In Charleston, South Carolina, Turkey Vultures were relied upon to clean up the offal and waste of the local slaughterhouses. It was a criminal offense to harm one of the birds, and the city officials rigorously enforced the law.

Such is not the case today. Today there is seldom much love expressed toward the Turkey Vulture. Much of the prejudice toward the Turkey Vulture is attributable to its diet - it feeds on carrion. Its diet is often referred to by such terms as filthy, foul, and malodorous. It is a scavenger, gathering where animal waste, scraps and garbage have been discarded.

But why should that be a cause for prejudice and distaste? Lots of birds do the same. Have you never seen crows feeding on a road killed squirrel, chipmunk, or opossum? Gulls are notorious scavengers. Some birders spend hours at town dumps, studying the feeding gulls in search of a rare species, while the gulls pick through the foul-smelling tons of human generated garbage.

A few years ago there was great excitement when an adult Bald Eagle was spotted on the ice in the West River. Traffic along Route 30 was slowed, even stopped, by people trying to get a look at the eagle. The eagle was feeding on a dead deer. Would the same kind of excitement be generated during the summer by vultures feeding on a deer carcass along the river bank? Perhaps if there was a Black Vulture among Turkey Vultures, it might attract the interest of some serious birders. The Black Vulture, a native of our Southeast, is extending its range northward. It is starting to show up in Vermont in the early Spring and mid-Fall. Birders will take notice of a Black Vulture. But the general public? They’ll only be annoyed at having to slow down.

Ah, someone says, the Turkey Vulture is disgusting because it feeds on disgusting, rancid, rotting flesh. If you think that, please read on.

John James Audubon (1785-1851) is synonymous with birds in America. He was a brilliant artist, an inveterate traveler, and a self-promoted frontier woodsman who sported long hair and fir-trimmed buckskins. He was also a superb naturalist with an abiding curiosity. Among the questions he asked was how does the Turkey Vulture find the carrion on which it feeds? By sight? Or smell? To answer the question, he first created a dummy deer carcass filled with straw and laid it in the open. Before long, Turkey Vultures appeared. That answered part of the question. Next he took a hog carcass and hid it under brush in a ravine. Vultures flew overhead but never came down to investigate or feed. Ergo, Turkey Vultures rely on sight, not smell. The authority had spoken.

Unfortunately, Audubon was wrong on two counts. He was wrong in his methodology, and as a result, wrong in his conclusion. In the 1960s, Audubon’s experiment was repeated with a carcass concealed in a box. A small fan blew gently across the carcass. Turkey Vultures soon gathered from many directions downwind and circled the area.

What had Audubon done wrong? The answer did not become clear until further experiments were conducted in the 1980s. Apparently Audubon had used a truly stinking, rotten carcass, presumably reasoning that what he would find odorously offensive would be appealing to Turkey Vultures. Not so. Turkey Vultures like their food properly aged - about one to four days. The Turkey Vultures could smell Audubon’s carcass, but it had the same appeal to them as it would have had to Audubon. None at all. It is now known that Turkey Vultures have a very acute sense of smell. A few straying molecules, often many miles from a carcass, can be detected by Turkey Vultures and lead them to their meal. 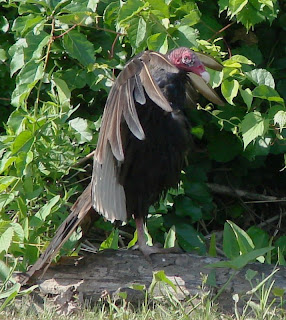 So, why is there this prejudice toward the Turkey Vulture? Yes, it eats dead meat, but it is particular about its meat being properly aged, just as I am particular about my dead meat being properly cooked. Most humans eat carrion, though we don’t call it that, and, since we lack the proper beak for the job, we have a butcher cut it up for us. We may have prejudice toward some humans, but except for the odd misanthrope, we are not prejudiced toward all humans. I don’t have an answer for this prejudice toward the vulture, any more than I have an answer for prejudice toward other people - except that all the evidence I seem able to garner suggests that prejudice - avian or human - is ignorance. Which, as a basis for an opinion, is stupid!

Email ThisBlogThis!Share to TwitterShare to FacebookShare to Pinterest
Posted by Chris Petrak at 8:15 AM
Labels: Turkey Vulture

Maybe some morbid curiosity drew me in to this post about rotting corpses. Whatever the motivation, I found it interesting!
Thanks for supporting the poor Turkey Vulture.

You don't list any contact information. I work with bird lovers in New York City. Do you have an email?

I live in Monroe, about 2 weeks ago there were 6 turkey vultures circling over my home, taking turns picking at a dead squirrel in the road. They came and and sat 15 feet away from me in my front tree and then on my neighbors roof before circling above the woods behind my house. They were enormous. It was amazing! Does anyone know if it's likely that they will be back? Will they stay in the area or was it a chance sighting?

I live in New Jersey -- we have an old barn we are about to rehab and when I went upstairs to our loft - I found a turkey vulture living up there -- not sure if she was nesting -- but i suspect she was. I have seen the pair before and even saw them on top of our barn. There is a whole in the old roof and they obviously got in.

Don't want to hurt them but we want to rehab the barn
Any thoughts, advice, ideas?

Turkey Vultures have long been on the top of my favorites and most respected list of birds. They are spectacularly graceful and efficient in flight and their appearance, so maligned by short-sighted humans, is testament to their evolutionary requirements. Long may they live; they are doing a better job keeping this earth cleaned up than we are.

Here I am in Nov 2019 having just started birding a couple of years ago. TV's are at my palm trees every day for three years. Usually 10 or so, sometimes 40, they apparently enjoy a snack of dates before sleeping in the other palm trees a half block away. I have labeled my address as a stakeout for TV. They are, of course, easy to spot high in the sky along the foothills of Los Angeles probably any day of the year. Their roosts are much more rare. There is a study in Irvine of vultures. I have an occasional visitor with one of their wing bands, 3Y. Otherwise, I have not been able to identify any one individual. Oddly, I see 3Y about every 5 or 6 weeks. He'll drop by for a day or a week and then it's gone for 5 or 6 weeks. Can you imagine if all of these behave that way. I once pictured and counted 60 in a kettle above my house. I remember stopping my car for a picture and talking with a couple professional road bikers whose team was renting nearby. We were in awe of the size and quantity of this. I find it all bizzare, but perhaps fortunate since I have been passionate about birding since researching them. They also attract very rare raptors into the neighborhood, from the zone tailed hawk that hung out last year for a couple weeks to the regular sighting of a pair of peregrines who engage the TVs rather aggressively. I'm in the heart of Monrovia, CA hillside neighborhood. The TV descend from the high mountains into the foothills every evening. They then snack on my dates, crap of my front steps, then hop over a couple trees to sleep on the street palms where they defecate over an entire cars. Locals are not foolish enough to street park. I hear hanging a dead one scares them away. I think there are a few too many witnesses and laws here in the middle of our suburban CA neighborhood. Anyway, as to the question of their unpopularity, please they are objectively ugly, defecate over square 3 yards wide. They have no song, no nests, and they stay in the same neighborhood for years at a time. They also do their wing spread in the morning sunshine that resembles the Nazi's national statues of WWII. I could not design a worse bird.