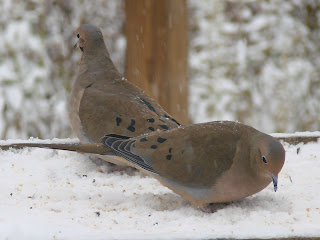 There was more snow on the ground than I can remember in my eleven years of doing the Brattleboro Area Christmas Bird Count (CBC). And it was colder than previous years. And when the wind blew, it was colder yet. By mid-afternoon, the clouds began moving in; the air became dank and damp and felt even colder. My heavy insulated boots kept my feet warm, but everything became chilled.

The annual CBC is one of my favorite days of birding throughout the year. In the late Spring, I can stand in my backyard and see or hear thirty to forty species in the early morning hours. Last Saturday, the team I was with scoured our assigned area and eventually tallied twenty-nine species. We wandered slowly along dirt roads until somebody watching or listening through the car windows cried, “Stop.” Then we tumbled out of the vehicle before it had stopped to chase an elusive sound or sight. 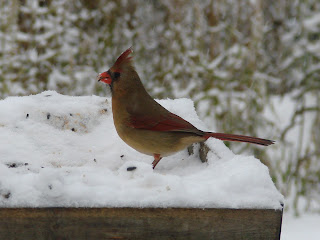 But in the winter landscape, when all of life seems to have gone into hiding, finding signs of life still on the move - up and about and around - is energizing and affirming. And we never know what we will find.

In the mid-afternoon we were in a dense stand of hemlocks; Juncos moved through the forest understory. Watching them, and counting, we were led to a Golden-crowned Kinglet in a small, leafless beech, and that lone kinglet led us to more kinglets. Conventional wisdom has it that several species will forage together through the winter woods, and we soon found the only Brown Creeper of the day, inching its way up a huge hemlock, then following the juncos and kinglets south along the road. Movement deep in the woods caught our attention. A larger bird ... another ... and another. One landed on the road forty feet from us, picked salt and grit from the road, and flew. Eastern Bluebirds - thirteen in the flock.

About thirty people participated in this year’s CBC. Seven teams surveyed assigned areas and counted the winter birds. One team searched frustratingly all day and tallied only a few species and few numbers. But they had a great time following mammal tracks. Numbers often seemed hard to come by. But by the end of the day, forty-eight species had been tallied with an unofficial total around 3000. Additional “count week” species brought the total for this year’s CBC to fifty-five. 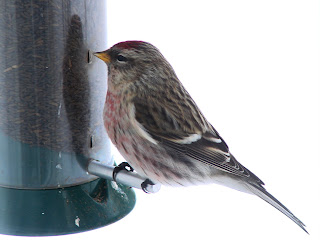 Fifty-plus species has become the norm for the Brattleboro CBC. The species vary from year to year. Each year there are a few species reported which have no business being here; they should have gone south long ago. This year there was a Great Blue Heron seen in flight, and a Northern Flicker. Species recorded for the first time were Yellow-bellied Sapsucker (two) and an American Woodcock. These migrants should have migrated before now, and quite frankly, not having done so may be a fatal mistake.

With almost no open water, it was no surprise that Canada Geese (some years there are hundreds) were completely absent as were most other waterfowl. A few ducks were found in the open water above and below the Vernon Dam and where Whetstone Brook enters the Connecticut River.

Count numbers for the invasive birds that no one likes but which feed the wintering hawks also matched recent numbers - European Starling: 362/336; Rock Pigeon: 285/ 271; House Sparrow: 211/166

The significant difference this year was the presence of wintering finches. Reports of birds irrupting south from Canada (where many seeds crops failed this year) have been coming from all over the Northeast. But we had to find them on count day, and we did. We counted fifty-one Common Redpolls, probably an undercount - since these birds are very nomadic as they forage. One year counters found a single flock of redpolls with over 200 birds, but not this year. There was a flock of twenty Snow Buntings, a scattering of forty-plus Tree Sparrows, and fourteen Evening Grosbeaks. 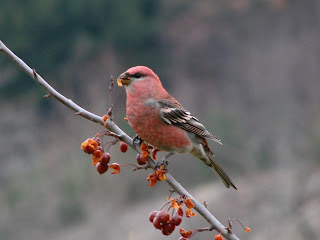 The buzz came with two other winter finch species which have only been recorded once in the last dozen years. In 2001, eleven Pine Grosbeaks were reported. This year, eighty-one were counted. These large, tame, red and gray male - or olive and gray female - finches are being found in fruit trees and berry bushes in many locations in southeastern Vermont. They stripped my loaded crab apple weeks ago.

The other finch species, also last reported in 2001 during count week, was found in a pine forest atop Stratton Hill in Newfane - five White-winged Crossbills. This is be the first time our CBC has recorded an actual count number for this species which feeds on pine and spruce cones. 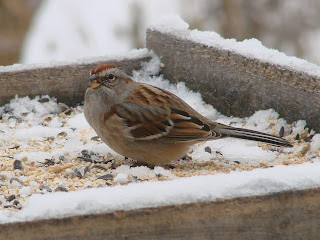 So it was cold, and wintery, and sometimes difficult to find the birds. But the end result is a snapshot of the bird life present in the Brattleboro area in the middle of December. Added to the results of thousands of other counts done around North America, we also contribute to a snapshot of the continental bird life. These accumulated snapshots from many years help researchers analyze the health and well-being of the birds, and more importantly, of the state of the environment and climate on which the birds - and all other life, including us - depend.

And it was fun. The Christmas Bird Count is always a good day spent with some crazy bird nerds and resulting in - by definition - a day of good birding.

I enjoyed reading your CBC account. Glad to hear others enjoy the count as much as I do. Great with those wintering finches.
Vern