Shorebirds in Hawaii Have Remarkable Journeys

When I was in California a few years ago, there were two wintering shorebirds that I was unsuccessful in finding: the Pacific Golden-Plover and the Wandering Tattler. The plover is closely related, and very similar, to the American Golden-Plover which appears along the New England coastline in very small numbers (usually juveniles) during the Fall. The two were considered one species until 1993. The Wandering Tattler is similar to our Spotted Sandpiper which is common along our New England streams. The tattler is larger; it wanders widely along Pacific coastlines after finishing its breeding task. Both the Pacific Golden-Plover and the Wandering Tattler nest in Alaska and northwestern Canada. The occasional report of one of these species on the Atlantic coast are usually dubious.

With no chance of seeing either bird in the East, I had hoped to see them on that trip to California. In the tattler’s case, I gave the search especial diligence, returning to a rocky piece of coastline several times where one was known to be spending the winter. No luck. 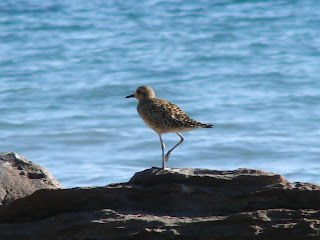 The main problem with looking for these North American birds along the Pacific coast of California is that they winter there in very small numbers. However, had I gone 2000 miles further west across 2000 miles of open ocean with no land along the way, I would have had no trouble in finding these two shorebirds.

On our first day in the Hawaiian islands, we were trying out one of the many beautiful beaches on Maui. It was late afternoon; the low sun cast a warm glow on the palm trees, the white sand, the gentle surf, and the many sun worshipers. I was enjoying all of the sights (although some of the sun worshipers I enjoyed more than others). The beach was interrupted by a jagged crop of lava rock. I noticed a shorebird silhouetted atop the rock and immediately forsook the other sights for a closer look at the bird. Maybe it is a sign of age that I so readily abandoned some of those sights for a bird, but ... this bird was a slim, sleek, gentle-looking, golden-brown shorebird. Pacific Golden-Plover. 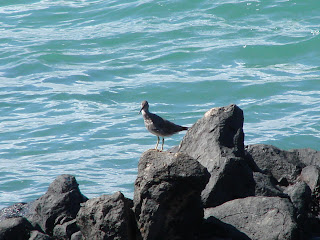 Two days later, we were returning from a snorkeling trip to Molokini Crater (where a whole new underwater world of beauty had been opened). Walking back to our car along the rocky shore, I noticed a shorebird. Like the golden-plover, it was silhouetted atop the rocks. Like most shorebirds, it was rather nondescript - shaped like a Spotted Sandpiper, mostly gray and streaked gray. Its body perched atop bright yellow legs; its tail bobbed from time to time. Wandering Tattler.

Subsequent to these first sightings of the golden-plover and the tattler were many more. The Pacific Golden-Plover is an abundant wintering bird in the Hawaiian Islands. Occasionally I saw it on a rocky shore, but more commonly it was foraging on golf courses and the grassy expanses of lawns, city parks, and cow pastures. It ran with short bursts, then stopped to feed on insects and invertebrates, then ran again.

On the Big Island, Hawaii, we stayed in a home on the edge of a thermally heated lagoon filled with native tropical fish. (Yes, life can be difficult.) Near the edge of the lagoon, I lifted my head to clear water from my snorkeling mask. Ten feet away, a gray bird bobbed its tail, then uttered a “tattling” call as it flew off. But not to worry - it was regular around our lagoon, often choosing the grassy edge to preen and rest.

The Hawaiian Islands are so isolated that relatively few birds found their way across the oceans and survived. The several species of Hawaiian honeycreepers are believed to be descended from a single undistinguished species of finch related to such birds as goldfinches and crossbills. Only a handful of birds found the islands, stayed put, and have gone, or are going, their own evolutionary way. In wetlands there is the Hawaiian Coot (related to American Coot), Hawaiian Duck (related to Mallard), Nene (related to Canada Goose), Hawaiian Stilt (a sub-species of Black-necked Stilt) and Common Moorhen (an Hawaiian sub-species). 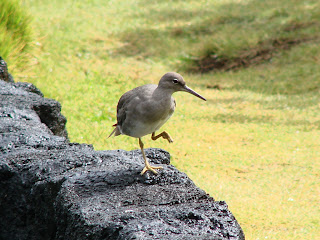 However, this extreme isolation of the Hawaiian Islands presents no barrier to a few species of shorebirds, notably the Pacific Golden-Plover and the Wandering Tattler. These birds make a remarkable journey twice each year. As the short Arctic summer wanes, these birds bulk up in western Alaska. Then, they fly some 3000 miles non-stop. Adults make the trip in August. Juveniles, with no adults to guide them, do it in late September. Once they have begun their flight, there is no choice about the flight being non-stop. There is no place to stop. There are no islands on which to rest along the way. If one of these birds burns up its fat reserves before reaching the islands, it dies.

The Pacific Golden-Plover makes the non-stop flight in about two days, flying at speeds somewhere around sixty miles per hour. It is no wonder that the bird appears thin beneath its feathers when it arrives. It is thin. The plover spends the winter, restores its fat reserves toward spring, and makes the northbound journey in May

Like the Wandering Tattler and the endangered Bristle-thighed Curlew, the Pacific Golden-Plover winters on tropical islands throughout the Pacific. Why would birds evolve such a physically demanding migration pattern? I could speculate reasons, and scientists probably have some empirical explanations. But I am content, for the moment, to gape at the journey. 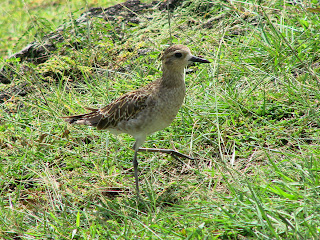 One thing I do not have to speculate about. Randomness does not figure into the migratory journey. The birds which make this long flight across the open Pacific waters know where they are going. Individual Pacific Golden-Plovers will return to the same spot on the same island year after year. On that favored spot - the fairway of the third hole of a particular golf course, for example - that individual golden-plover will aggressively defend its wintering territory from others of its kind. The same bird will often be in the same spot day after day and will return year after year. It may share the general territory with aliens like the Common Myna or Cattle Egret, but it is loath to share it with another golden-plover.

I enjoyed wandering the beaches in Hawaii. The beach fauna came from all over and in many sizes and shapes. Most sported minimum winter plumage. And some beach fauna, in shape and minimum plumage, were truly eye-catching. But with the exception of a few island residents, all came with the help of technologically sophisticated navigational instrumentation operated in their behalf. By contrast, the Pacific Golden-Plover and the Wandering Tattler have been finding their way to these same places with only their own inherited resources. For me, most of the time, that makes them the more interesting and fascinating.

Email ThisBlogThis!Share to TwitterShare to FacebookShare to Pinterest
Posted by Chris Petrak at 8:16 AM
Labels: Pacific Golden-Plover, Wandering Tattler