Blackbirds Baked in a Pie

Childhood is wonderful. A child can listen to a nursery rhyme, or recite it, or sing it, and just enjoy its silliness. A nursery rhyme like:

Sing a song of six pence, 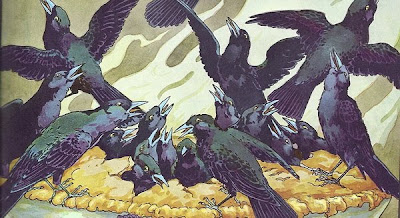 a pocketful of rye.
Four and twenty blackbirds
baked in a pie.
When the pie was opened,
the birds began to sing.
Wasn’t that a dainty dish
to set before the king?

A child can just enjoy that. An adult, with an adult mind and an adult curiosity, begins to wonder about such a nursery rhyme. How do you bake birds in a pie without cooking them beyond any ability to sing? And why blackbirds? - since every black bird I know of can’t sing worth a toot.

As an inquiring adult, you undoubtedly recognize that this nursery rhyme comes from a very different time and place, with its sixpence and its king.

Like most of our nursery rhymes, its origin is England. It first appeared in print in 1744 in Tom Thumb’s Pretty Song Book, but its origins are far older. Shakespeare may have alluded to the rhyme in Twelfth Night, where Sir Toby Belch tells a clown: “Come on; there is sixpence for you: let's have a song.”

It certainly came from the era when kings ruled, and no expense was spared to indulge and entertain the ruler. “A sixteenth-century amusement was to place live birds in a pie. An Italian cookbook from 1549 (translated into English in 1598) contained such a recipe: ‘to make pies so that birds may be alive in them and flie out when it is cut up’ ....” (Wikipedia) At the wedding of Marie de Medici and Henry IV of France in 1600, the first surprise at the banquet came when the guests sat down, unfolded their napkins and saw songbirds fly out.

That probably deals with the perplexing part of the rhyme about baking birds in a pie. Those who catered to over-indulging the king were always on the lookout for ways of providing the monarch with new amusements. But why blackbirds?

Most of the black birds we know, cannot carry a tune to save their feathers. The Red-winged Blackbird’s “conk-a-reeee” is the closest thing to a song by a black bird - loud and distinctive, it will soon be carrying across the marshes and grassy fields in our neighborhoods. His cousin, the Common Grackle, is a step down the musical ladder from the Red-winged. He creaks and cracks and zzzts and chaas. As lame as the grackle is when it comes to singing, his musical ability outranks the Brown-headed Cowbird with its weak bundle of gurgles and thin, whiny zzzzzzzs.

Now we need to be fair. These black birds are in fact, blackbirds; they are all in the New World Icterid family. Also in this family are the meadowlarks, the orioles, and the Bobolink, and these are all “blackbirds “ - Icterids - which are not completely black and which can sing. Indeed, they are among the best songsters when they are busy with their breeding activities.

Other black birds which cannot sing are in the Corvid family: the crows and the ravens. Our local crow, the American Crow, serenades with variations of a tenor scaled “caw.” Our Common Raven is the baritone or bass voice: “Cronk, caa-rack, cu-ruck.” Both of these songbirds (yes, they are songbirds) have tremendous variety in their language, but none of that language would be considered musical except by those with the most perverse taste in music. I do realize there are some people with such perverse musical tastes.

European monarchs knew the big black birds. The raven is familiar in Europe. So are many other Corvids: crows, choughs, rooks, and jackdaws. Can you imagine the size of the pie that would be required to get four and twenty crows inside? Even at an oversized banquet for newly wedded monarchs it would overwhelm the royal table.

Those same European monarchs knew nothing of our blackbirds - Icterids - until voyages of discovery began returning with specimens. Those specimens would have been remarkably unfit for a pie, much less capable of singing. 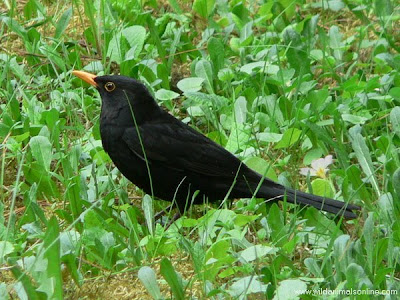 Here is the description of the Common Blackbird’s song in Birds of Europe: “Song well known for its melodic, mellow tone, a clear and loud fluting (almost in major key) at slow tempo and on wide, often sliding scale, with soft twitter appended; verses rather short ...”

Having been confined in a pie, I can certainly imagine that these birds would burst into song upon being released, a song worthy of a monarch’s chamber music gathering, or even a joyous wedding banquet. 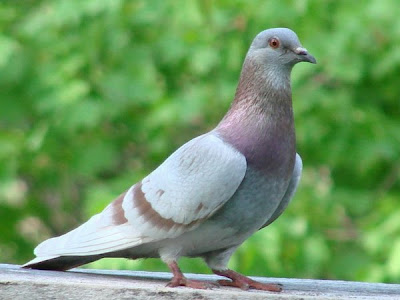 I cannot resist one final footnote about this dainty dish of blackbird pie. British experimental chef Heston Blumenthal attempted to create the dish for an episode of his television series “Heston's Medieval Feast.” When he discovered that blackbirds are a protected species in the United Kingdom, he switched the recipe to pigeon. The pie and pie lid were cooked separately and allowed to cool. The live pigeons (I don’t know if there were four and twenty pigeons) were inserted only moments before presentation. Initial attempts resulted in the pigeons refusing to fly out. This was solved by using trained homing pigeons to fly to their cages suspended in the ceiling. When the pie was opened, the homing pigeons flew to their cages, whereupon they defecated on the celebrity diners beneath.

Good for you, birds!


Note: The blackbirds in the painting look like grackles, not Europe's Common Blackbird. The painting comes from a very old book which I own of nursery rhymes and I believe is in the public realm. The photo of the Common Blackbird is not mine; the credit on the photo is www.wildanimalsonline.com. I believe the photo is in the public realm; mI I am wrong about either, I will remove it.

Email ThisBlogThis!Share to TwitterShare to FacebookShare to Pinterest
Posted by Chris Petrak at 6:00 AM
Labels: Common Blackbird Sing a song of sixpence

Great story! On a related note, it reminded me of an incident in one of Laura Ingalls Wilder's "Little House" books: her family's corn crop was being decimated by large flocks of "blackbirds"; which her father shot and her mother subsequently baked into a pie!

Now I'm wondering what kind of birds they might have been--since about six of them were in a pie for five people, they must have been pretty small. Any ideas about the ID of a small, socially gregarious plain black seed-eater that might have been in North Dakota in the 19th century? Another mystery worthy of your skills!

HI Chris,
Very interesting post once again. I'm learning a lot by reading you and it is nice to get nice illustration with fantastic pictures. we are getting your snow now.. Tons of it!

Beautifully written post! I am very familiar with the European blackbird. It usually starts singing loudly at daybreak around 4AM. Although melodious, to many people it's just as obnoxious as a rooster crowing.

Bobolinks sound (and look) very much like Red winged blackbirds to me. They must be very closely related!

Interesting folklore there, and the sight of a European blackbird and a reference to heston Blumenthal was a little strange on a US site!
Our blackbirds are just starting to sing now, and very beautiful it is - no matter how early in the morning.

hee hee..would have liked to be a fly on the wall at the event with the pigeon pie...
nice post as always!

Well, this post was superb!! An enjoyable read ..and very informative at the same time! One does wonder about the origin of nursery rhymes..and Mother Goose has been investigated over and over..but your explanation was the best! Can't imagine trying to recreate birds in a pie..but it sounds like it was birds 1 Heston 0!! ;-0

Interesting post Chris. In the first printed 1744 version it was "four and twenty Naughty Boys" and then changed to "birds" in 1780 but we still don't really know the true origin.
When I started to read I thought I would have to defend OUR true 'Early Bird' songster but you eventually mentioned it's melodic tones. The early morning chorus would certainly not be the same without the Blackbird's liquid voice. FAB

Great article, Its really a very informative posting indeed. Resources like the one you mentioned here will be very useful to me! I expect more and more article like this from you in the future as well.
Banquet Halls in San Fernando Valley

you are what you read said...