The Wild Turkey Is No Turkey

“You turkey!” Those words are not a compliment. You are dumb! Stupid! Like that dumb turkey.

I once asked a farmer, “How dumb is a barnyard turkey?” She told me that a barnyard turkey is so dumb that it will stand in a pouring rain, with its head up and beak open - and drown. If she wasn’t joshing this city-bred transplant, then I have to agree that barnyard turkeys are astonishingly dumb. 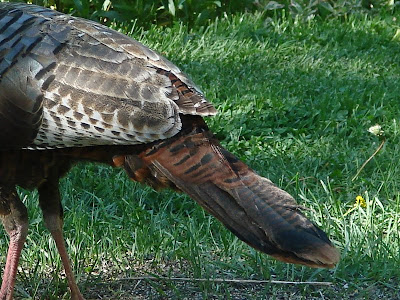 Even a popular naturalist and author calls the barnyard turkey “a rather stupid creature,” but hastens to add that “the original wild form is a wary and magnificent bird.”

The domestic turkey and the Wild Turkey are the same species, Meleagris gallopavo. A distinctively American bird, its scientific name is derived from the Latin names for an African guinea fowl and and Asiatic bird. The occasional domestic turkey which might wander off can be distinguished from its wild relative by the white tail tip of the original Mexican subspecies from which it was domesticated. Wild turkeys have chestnut-brown tail tips. They are also thinner than domestic turkeys. 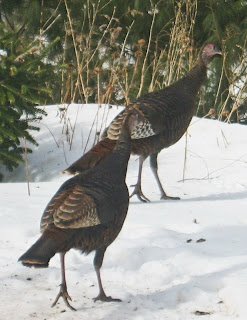 Turkeys are large, mostly ground dwelling birds. They forage in the morning after leaving their roost and again during the few hours before sunset. With their long, powerful legs, they scratch the ground and leaf litter for seeds, nuts, and acorns. They also eat the fruit of junipers, dogwoods, and grapes, corn and other grains. In summer they may eat grasshoppers, frogs, salamanders, toads, lizards, fiddler crabs. In winter when snows are deep, they may fast for up to a week. Seed and corn around bird feeders may attract wandering flocks.

The male Wild Turkey (called a tom, or a gobbler) is about four feet long, the female (hen) about three. The breast feathers of the male have black tips; those of the female are brown. The tom’s head and neck are blue-gray with pink wattles. During spring display, his forehead is white, face bright blue, and neck scarlet.

Turkeys usually travel on the ground by walking or running. In spite of what sometimes appears to be a reluctance to fly, and an awkwardness when airborne, they are remarkably strong flyers. Flight speed has been timed at 32-42 miles per hour on one occasion, and 55 miles per hour on another. They typically roost overnight in tall trees. 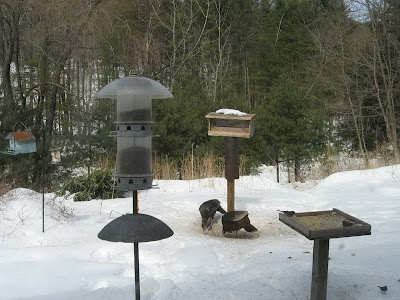 Several people have commented to me this winter about seeing turkeys in same-sex flocks - all females or all males. This is typical of turkeys during most of the year, although the young will stay with their mothers. Within the flock, there is a pecking order. The oldest and biggest birds rule over the younger and smaller birds.

Courtship and breeding begins in late February in the southern states, in early April in the North. Toms may gobble in any season, but in early spring, any loud noise may stimulate gobbling - an airplane roaring overhead, the hooting of an owl, or the slamming of car door. Gobbling may be heard a mile away. Spring gobbling season is triggered by the increasing day length and warming temperature.

In the Spring, the gobbler gobbles to attract a female. Once he has attracted one - or preferably, several - hens to his vicinity, the gobbler does his courtship display. He struts around the hen. His tail is fanned and held vertically. His wings are lowered and drag on the ground. He raises the feathers of his back, throws his head back onto his back, and inflates his crop. He makes deep “chump” sounds, then hums while rapidly vibrating his tail feathers. During the strut his facial skin engorges and the colors intensify. In the presence of the big, wily old tom who knows the strut, the hen swoons and her resistance vanishes.

Having done the deed, he gobbles and struts for the next hen. Toward the end of mating season the harem breaks up, the hens wander off by themselves to complete the task of raising a brood, with no further assistance, care, attention, or concern from the self-important gobbler. The nest consists of a shallow excavation scratched into the earth then hastily lined with leaves and other forest-floor debris. But even if they're slovenly builders, wild turkey hens always conceal their nests carefully, and cover their eggs with debris each time they leave the area to feed. A single hen often lays over a dozen eggs, and several hens may share one nest. (Audubon reported finding 42 eggs in a single nest, with three hens in attendance.) The incubation period is 28 days, with a hatch success rate of 35%.

The poults can walk and feed themselves when they hatch, but cannot fly for about two weeks. Clearly this whole period is fraught with great danger and vulnerability for the mother, her eggs and her young. The list of predators is long: raccoons, red foxes, striped skunks, crows, snakes, opossums, chipmunks, squirrels, owls, hawks. We are most likely to see turkeys fleeing, but a nesting or brooding hen will not hesitate to attack a predator threatening her eggs or her young. 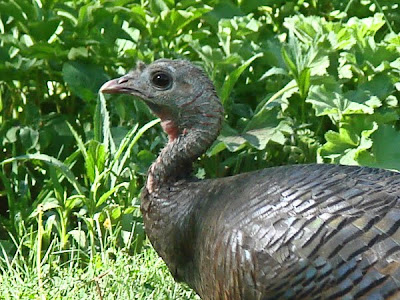 The turkey was once so common in North America and so highly regarded, that it was considered a choice for our national emblem. At least, Benjamin Franklin so proposed. In a letter to his daughter, Franklin objected to the choice of the Bald Eagle. He thought it “a bird of bad moral character ... too lazy to fish for himself,” often robbing the “fishing-hawk” (osprey) of its prey. “Besides he is a rank Coward: The little King Bird not bigger than a Sparrow attacks him boldly and drives him out of the District. He is therefore by no means a proper Emblem for the brave and honest Cincinnati of America who have driven all the King birds from our Country ... The Turkey is in Comparison a much more respectable Bird, and withal a true original Native of America ... He is besides, though a little vain & silly, a Bird of Courage, and would not hesitate to attack a Grenadier of the British Guards who should presume to invade his Farm Yard with a red Coat on.”

Franklin correctly described the character of the Wild Turkey. The sum of it is - a Wild Turkey is no turkey, except in the mind of some turkeys!

Great post! I love how your last shot makes the bird look like it's cast out of bronze. And I never would have guessed that Tom Turkey was such a player with the ladies!

Really enjoyed this post..I vote for the Turkey for our emblem..:)
Hey where is your tweet button? u must get one for all of us twitter users who read you blog and will tweet posts out to those on twitter..
anyway..i am going to tweet this out anyway using the old fashioned method.. :)

...I really enjoyed this post. Turkeys have been reintroduced in our area, and I'm finally starting to see more and more here and there. I love it when a small flock crosses the path on the river trail. They move so quickly on foot and disappear so easily in the undergrowth.

You have wonderful photos here. That last photo does look like a bronze!

Your Turkeys are fantastic: the birds are beautiful and so are your pictures!
How lucky you are to have them in your yard!

i love your pics! my turkeys have not yet learned to stick around and eat corn after i feed them...they don't run anymore when they see me, just walk slowly up the hill and some watch me throw corn but they never come back down...quite perplexing!