During the second week of August, time ran out. 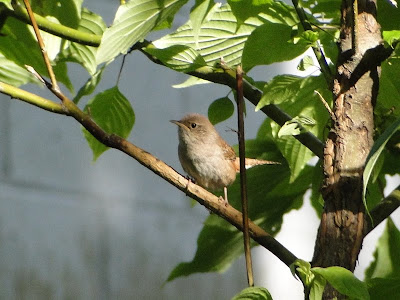 When we lived in Pennsylvania, the House Wrens arrived during the last week of April. Their bubbly, unending song began before first light and ended after last light. Six wren houses were scattered around the yard, and they used them all. Some only had a few sticks in them, but at least two, sometimes three, were crammed tight with sticks, except for the small cup that formed the nest.

They seemed to choose the box immediately outside our bedroom window for their first nest, which put their song very close to us for the first couple of months. Wrens volubly proclaim their every movement. And then the first nest would be silent. The young fledged and disappeared into the shrubbery and moved off toward denser habitat than that provided by the yard. 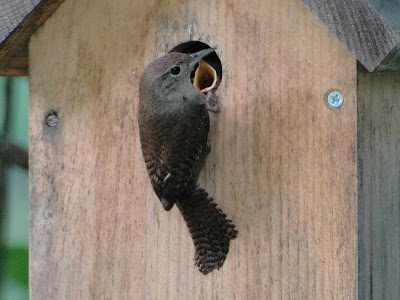 The activity shifted toward a second box, as did the voluble song. The second clutch of eggs had been laid even before the first brood had fledged, the female incubating the former, the male feeding the latter.

Many summers this scenario occurred a third time. This time the nest box was in the cherry tree at the side of the house, near the drive. The activity was in full gear in late July and early August, the wren singing before every entry into the box, and again with every departure, and often from somewhere in the yard as he foraged for the young in the nest.

Then during the second week of August, it was quiet. One day, I would be aware that the background noise of the summer was gone. Most years I could tell you the date when they first arrived in April, because I recorded such arrivals. But departures are more difficult to record. Unless you take attendance every day, you are not aware of an absence. You don’t write down last observations, because you’re never sure they are the last. One day I realized that the wrens were gone. The realization came during the second week of August. The wrens had left. I would not hear them again until the following April.

Some time after the wrens had departed, I gathered the wren boxes from around the yard, and cleaned them out before bringing them in for the winter. One year as I pulled out the dense stick nest from the third box the wrens had used, I found five unhatched eggs. Another year, I found four hatchlings and an unhatched egg. Most often I found four to six nestlings, perhaps half way to fledgling status. None were alive.

The nest had been abandoned and the eggs or hatchlings or nestlings were left to die. The internal clock of the wrens told them it was time to go. Regardless. Migration must begin. The wrens departed. For three and a half months, parental activity had been frenetic. The instinct to breed and raise young drove their every waking moment. Occasionally they must have consumed some insect or grub of their own, but these were quick bites squeezed in among the hundreds of trips they made to feed first one brood, then a second brood, then a third.

And then a second instinct took control, a more primal instinct than the parental one. Individual survival trumped the survival of their offspring. It was time to go, and they went. Quietly they headed to the thickets and woods, in a general southerly direction. They bulked up, adding fat for their long journey. The young in the nest were left to die. 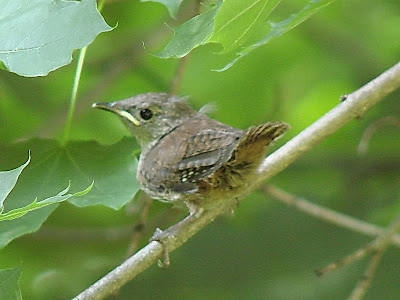 Nature is a harsh odds maker, and it plays the odds. The odds of any fledgling bird surviving to the next year and being able to breed are long. Some estimate the odds to be, at best, one in five. The odds of an adult bird who has bred this summer surviving to breed again next summer are better. One in two is often suggested, sometimes a little better. The purpose for any individual is to pass along its genes. And that means playing the odds. Small parent birds expend tremendous energy and  effort to raise their young, but rarely do they deliberately endanger themselves in the process. To do so would mean an end to their genetic line - a dead end.

Small birds defend their nests against predators such as larger birds, or snakes. But they don’t sacrifice themselves; that would be a literal dead end for themselves and their offspring. The young they raise may not survive, but if the adults survive they may have another opportunity to breed in the future.

I have used the House Wren as an illustration and example. There are lots of exceptions to the generalizations I have drawn from the wrens. There are birds that stay together in family groups throughout the year. There are young that stay with parents as helper birds during the next breeding season. But for most small birds, there is a harsh limit to parental care. When the limit is reached, the parents focus their energy only on their own survival.

We often romanticize and sentimentalize nature. We are entertained, amused, and delighted by the birds which flock to our feeders, by their cuteness, vivacity, acrobatics, and antics. Sometimes we are upset when some seem aggressive, act like bullies, seem voraciously greedy. We scarcely recognize that none of them are influenced by human values. 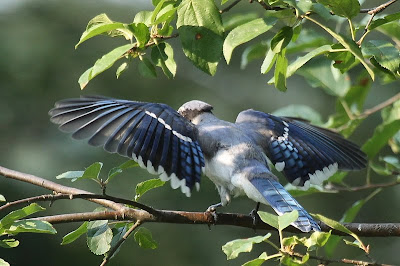 I watch harried parent birds feeding their young. The young flutter and call and beg, and chase after their parents to be fed. I smile and think about how glad I am that my children are raised, and feel a moment of sympathy for those parent birds. But then I watch more closely, and I see that the parents are leading their young to food, showing them where to find food. Often the young birds that are slow to learn are driven away by their parents. Dependency by the young must come to an end; they must learn to survive on their own, for their sake, and their parents’ sake. A point comes when the parent must turn to its own survival and let whatever happens to its young, happen.

I felt a poignancy and sadness whenever I cleaned one of those wren houses and found a nest of dead babies. But then I reminded myself that even if those young had fledged, most would not have survived when finally left on their own. For the parents birds, it was time to head south, even though there were young still in the nest. Time ran out.

We had 3 wrens clutches this year. The last one left Wednesday morning, which seems late to me. I wonder where those babies are now?

Yes, time to bring the boxes in and clean them out. Maybe next year we'll get the Bluebirds we had hoped for!

A very poignant and well observed scenario Chris. Self survival to ensure continuance of a breed is obviously inbred in the genes.
Interestingly I also found one deceased Blue Tit in the usual box this year (two last year)so can only presume the parents were more concerned with feeding those that had fledged sucessfully.

So that's what happened! Until a couple of days ago I could hear a chorus of young wrens from the nest box at the gable end of our porch, but I just realized all has been quiet for a couple of days, and the chicks were too young to have fledged. Thanks for he info.

our pair of house wrens had 2 clutches, and after reading your post realized, have not heard them this last week. guess time to clean the houses like you posted. Nice post

Hi Chris,
Well this is exactly what we call trade-off in Science... What are the benefits and the cost of life and sometime raising the chicks to their adults state is too costly... This is a nice post that remind us that yes nature is harsh, but it is nature ;-) I prefer this to happen than to see chicks dying in a nest box because a cat killed both parents....

Great post and photos, Chris! I believe the house wrens in my yard have had at least two maybe more clutches. One has been extremly noisy and fussy all summer long.