Whiskey Jack and the Real Thief

“Whiskey Jack!” That’s a name that conjurs all manner of suggestive images. Whiskey Jack is also known as Moose-bird, Meat-bird, Meat Hawk, and most notoriously, Camp Robber. This assortment of names come from the north woodsmen who contended with Whiskey Jack’s thievery and found amusement in its antics, particularly during the short, cold winter days. 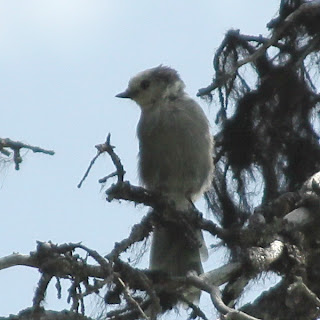 In 1840, John James Audubon wrote of Whiskey Jack: “when hungry, they shew no alarm at the approach of man, nay, become familiar, troublesome, and sometimes so very bold as they enter the camps of the ‘lumberers,’ or attend to rob them of the bait affixed to their traps. My generous friend, Edward Harris, Esq., of Moorestown, New Jersey, told me that while fishing in a birch canoe on the lakes in the interior of the State of Maine, in the latter part of the summer of 1833, the Jays were so fearless as to alight in one end of his bark, while he sat in the other, and help themselves to his bait, taking very little notice of him.”

Today, Whiskey Jack is known officially by the terribly commonplace common name of Gray Jay. In common name parlance, “Gray Jay” is a step down from “Canada Jay,” the common name by which Audubon and every other birder knew this bird until some committee recently lost all sense of historical place. I have no doubt that our good neighbors to the north ignore the committee and continue to call this bird by their country’s name. 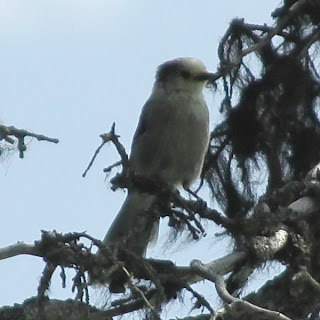 Gray Jay (Canada Jay or Whiskey Jack) is a bird of the Canadian boreal forests. Its range extends south into the United States in the higher elevations of the Rocky Mountains, and into the boreal forests of northern Maine and Vermont’s remote Northeast Kingdom. Edward Forbush gave this description of its home and personality: “The Canada Jay is an inhabitant of the northern wilderness where it consorts with the mighty moose. Its home is in boreal coniferous forests and swamps where civilized man seldom penetrates. In these wilds it shows little fear of mankind. Its principal characteristic is its boldness ... Camp is no more than established when the Canada Jays or Moose Birds ‘rally round’ eager to snatch any bit of meat or other edible substance. They learn to go into tents and even into buildings ... and have been known to feed from the hand.”

The Gray Jay is a Corvid (Family: Corvidae), a relative of crows, jays, and magpies. Like the other members of its family, it is omnivorous, intelligent, and opportunistic as it makes its living in an often harsh and hostile climate. Perisoreus canadensis (“Canada” has been retained in the scientific name) has only two relatives in its genus, the Siberian Jay of northern Eurasian boreal forests and the Sichuan Jay of Szechuan Province in China. 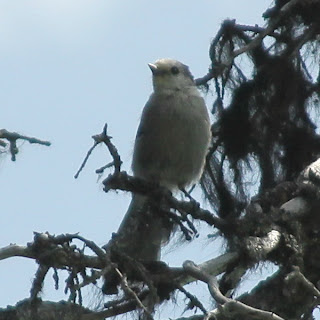 The Genus, Perisoreus, means to heap up, an allusion to the Gray Jay’s habit of caching food, a behavior exhibited by many of the Corvids. In the Gray Jay’s case, the caching of food apparently enables it to begin nesting when common sense would suggest that its only concern should be survival. “Breeding Gray Jays build nests and lay eggs in March or even February, when snow is deep in the boreal forest, temperatures may plunge far below freezing, and there is no obvious food to support reproduction. In spite of such hostile conditions, Gray Jays have a high rate of nest success and the young typically leave the nest in late April, well before most boreal birds have even returned from the south, let alone begun nesting themselves .... Stored food enables nesting jays to feed their young even during a blizzard ....” (Wikipedia)

Like so many of the Corvids, Gray Jays have become the source of myth and legend. You might think that “Whiskey Jack” is a name bestowed by hard drinking northern lumbermen, memorializing their source of solace during the harsh winters. In fact, Whiskey Jack probably derives from “Wis-ka-tjon,” the name given to the trickster-transformer by native Americans north of the St. Lawrence and personified in the Gray (Canada) Jay.

One does not have to go far in an internet search to find photographs of the bold character of Whiskey Jack: feeding from someone’s hand, landing on someone’s head, stealing bits of food.


I have yet to have such an experience. I saw Whiskey Jack on my recent trip to the Canadian Rockies. He paused in a spruce tree along a popular, tourist laden trail at Lake Louise. He was shy, and quickly disappeared. The encounter was like the previous ones I have had in the Colorado Rockies thirty years ago and in Nova Scotia twenty years ago. On all of these occasions, my trail mix of nuts, dried fruit, and M&Ms was never threatened by a thief.

Whiskey Jack may have a reputation as the camp robber, but at this point in my experience, there are other birds which have had a much greater propensity for larceny. (Come back soon for more on this.) 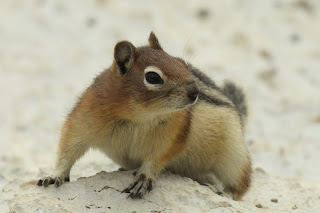 But I have yet to experience any bird which could rival the brazen thievery of the mammal which I encountered in the Canadian Rockies. We did the short, but very steep, climb to Bear’s Hump in Waterton Lakes National Park early this month. At the top, the view was magnificent, but before we could enjoy it, we needed nourishment. We found a nice bench on which to sit and snack. Before the pack was even on the ground, a Golden-mantled Ground-Squirrel was begging - nay, investigating - poking his rodent nose into every small opening. 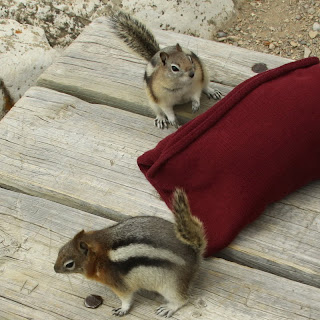 This creature is about the size of a red squirrel, but with a stumpy chipmunk-like tail. It looks like a chipmunk on steroids. And it is absolutely brazen. We shooed one away, then another, then another. When we recovered our energy, we stood to enjoy the view. Two robber squirrels immediately attempted breaking and entering. I stamped my foot and sent them fleeing, then turned away, then turned back to see four of the creatures swarming over our pack, around our drink, and through our jackets.

Whiskey Jack may have the reputation for camp thievery, but in my experience - confirmed just two weeks ago - the truly accomplished looters and robbers are mammals, like the Golden-mantled Ground-squirrel, or like those fur-less mammals (which shall remain unnamed) which continuously engage in planetary looting. Old Whiskey Jack, the Gray Jay, has the excuse of harsh winters (the sort that make Vermont winters look like a tropical interlude) for his rush to grab and cache food. But those other mammals have taken the brazen thievery of the rodents to even greater heights.

Perhaps I should not point fingers, lest - to paraphrase the words of that great American philosopher, Pogo - I meet the enemy and he is I.

The Gray Jay is my favorite corvid. I've never had trouble with them in camp, but I have had run-ins with Golden-mantled Ground Squirrels.