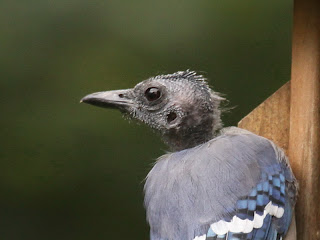 Since August, I’ve had a sizable flock - or maybe flocks - of Blue Jays that make several noisy forays against my bird feeders every day. Among those jays was one whose head was bald. It had no sassy crest, no white patch on its eye, no dark line through the eye, no black necklace - no feathers. It was bald.

Off and on during August, a cardinal would show who was also deficient in head feathers. His red crest looked like he had received a Marine Corps buzz cut. He wasn’t quite bald, but he wasn’t far from it.

What causes baldness? As a human, I know that my severely thinned topknot cannot be blamed on my father,  in spite of his baldness, because human baldness comes from the mother’s side. It was my maternal grandfather’s shiny dome that causes me to hide my thinning with an ineffective comb-over. 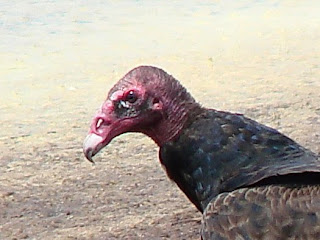 It’s much more complicated for birds. Some baldness in birds is easily explained. Vultures are bald. Vultures are carrion feeders. Their baldness is an evolutionary adaptation which accommodates their feeding methods. Sticking their heads into the cavities of dead animals would cause the head feathers to become caked with all manner of rotting gunk. No bird can preen its head feathers. Even if vultures preened one another, the gunk would be difficult to remove. So they are bald. Their genetic code is programmed for no head feathers at all.

But what about my poor bald Blue Jay, and the buzz cut cardinal? Why were they bald? I would like to be able to give you a simple answer. But, I cannot. Bird baldness does not succumb to easy answers. There are several possible reasons for baldness in birds, and these reasons are supported mainly by anecdotal evidence, not by scientific study.

Molt  -  Normally birds molt their feathers in waves, a few at a time, so that bare spots rarely appear. In the bald Blue Jay, something may have gone awry, causing all of the feathers to molt at once. Eventually the bird will regain its feathers and its normally sassy appearance.

Mites - An infestation of parasitic mites on the head could be the cause. Feathers require extensive maintenance, known as preening. But the head cannot be reached by the beak, and the mites on the head may result in the loss of head feathers. Or the birds may be scratching their heads with their feet, ridding themselves of head feathers while trying to rid themselves of the itching insects.

Nutrition - I found several anecdotal accounts in support of poor nutrition as a cause of bird baldness. From a Los Angeles observer, there is this account of a Western Scrub Jay: “I called him Scruffy because, well, that was what he was - almost totally bald on his head and neck and totally bedraggled feathers elsewhere. He was also rather listless and ‘depressed’ for a scrub jay, sitting huddled on a branch for long periods of time. He looked and acted like that for the first several months I knew him (I met him in about July or August), until I finally stopped at a pet store one day and got the best, most complete avian supplement I could find, then got some mealworms from a fishing tackle shop. Each day I gave him several mealworms to which I had added a drop of the supplement. Within a week or two he started to make a dramatic improvement and after about a month had become a beautifully sleek and energetic scrub jay. I continued to offer him mealworms and raw pinon nuts, all of which he eagerly accepted. He went on to acquire a mate the next spring and successfully nested twice without ever again displaying any feather problem.” 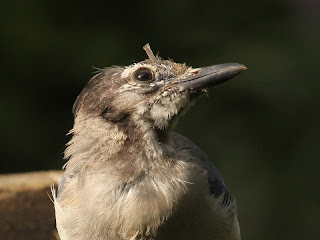 A less likely cause of bird baldness is feather-picking. Some birds, especially crows, peck head feathers from others. But they usually attack their own species. And then there is the House Wren in Nebraska which attacked a nest of almost grown bluebirds.  One of the babies was almost completely bald after the attack.

Bird baldness is most often reported in Blue Jays and Northern Cardinals, but I have found no discussion as to why baldness would be species specific.

The conclusion is that bird baldness may be caused by any of the factors I have mentioned, a combination of those factors, or something else altogether.

In humans, there is ambivalence toward baldness. One bald friend insists that God made a few perfect heads and gave hair to all the rest. His opinion is not shared by the hair transplant and toupee industry. Samson’s strength and virility disappeared when Delilah shaved off his long, thick locks of hair. On the other hand, a female country singer carols her delight at the sexiness of bald-headed men. Humans can’t decide.

Toward bald birds, there is more unanimity. I did not find a single report of bald birds which toted their beauty.  The most positive thing I found about bald birds is “Lizard-Head,” followed by the similarities between birds and dinosaurs which can be observed when a bird’s head is not veiled under feathers.


In human terms, bald birds are ugly - whether naturally ugly, like vultures, or unnaturally ugly like my bald-headed Blue Jay and buzz-cut cardinal. I am happy to report that my bald Blue Jay  is no longer ugly. It  is a healthy bird. Its feathers grew in, and it is now indistinguishable from the rest of the noisy flock.

Email ThisBlogThis!Share to TwitterShare to FacebookShare to Pinterest
Posted by Chris Petrak at 6:00 AM
Labels: Baldness in Birds, Blue Jay Baldness

Chris, in August '09 I had an almost bald Blue Jays and Northern Cardinals at my feeder. They looked so pitiful while it was happening but all of them grew new feathers in time. So they appeared to be going through their post-breeding molt.

We've had a bald northern cardinal hanging around the yard, he was feeding a fledge, so, I'm guessing his lack of head feathers didn't impede him from mating...

In a way, I have a feeling that as humans we think about things like this more... than whether we think about that thing rustling in the trees or that shadow over there or whatever moved in the periphery wants to eat us for lunch.

We had the same thing late this summer, a bald Blue Jay and a nearly bald Cardinal. My mom said it was due to mites but I don't know. I haven't seen the baldies around lately but I imagine they are doing just fine.

Perhaps it could be a type of dermatitis -- a type similar to hair loss on dogs - maybe it could cause feather loss on birds. With my dog it came during her normal "moulting," when hair falls out and then a new batch comes in. This year, for the first time, she got a type of dermatitis that actually made her legs bald but then new hair grew in. I guess what I am saying that comparatively the same actions are happening to the birds as it is to dogs. Not all dogs get the balding dermatitis as not all birds get their baldness. Just some thoughts -- barbara

Interesting! I took some pictures of a bald bird last month that I never got around to ID'ing... I was wondering what caused it and now at least I have some ideas!

....I am so happy, Chris, your Blue Jay got "feathered" again and is flying happyly with the "noisy flock" around...!

I always learn something from your blog! I haven't seen any bald birds in my yard, but I'll keep my eyes peeled for naked-headed birds from now on!

What a fascinating post. Very informative, and you happened to have the pictures to go along with it!

What was the supplement brand/name? I would like to add this to my flock of bluebirds