This morning as I laid in my bed trying to stir myself into consciousness, I listened for the sounds of the awakening world through my open bedroom window. A couple of Blue Jays called back and forth with their harsh jay ... jay. A cardinal, so often one of the first birds to visit the feeders in the morning, chipped. There was a wing whirr as a Mourning Dove took flight. Slowly the number of twitterings from the goldfinches increased - once I heard a chick-a-dee-dee-dee.

These were the sounds of a fall morning. What a difference, I thought, from four months ago when I could listen to two dozen different species singing their early morning songs, announcing their presence, staking their territory, and calling for a mate. Now the breeding season has been completed. 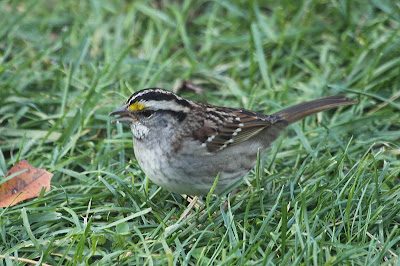 The song birds are on the move; their singing is but a memory of summer. As the morning slowly lightened, I could hear only one bird singing, but it wasn’t the full song. Just dribs and drabs, as though perhaps the juveniles hatched this year were trying to learn. Peeeea ... body. Pea, pea, pea ... body. Pea ... body-body-body. Pooor ... sam. Once in a while, someone even got it completely right: poor-poor-sam-peabody-peabody-peabody.

But why are the White-throated Sparrows singing now? Now is their time to gather in flocks, to forage together, to use others of their kind as look-outs for danger, to move southward against impending winter.

Young songbirds learn their species’ songs from the older birds, and the best guess is that the variety of partial songs I am hearing in the early morning are the White-throated juveniles learning and practicing.

When I went downstairs for my second cup of coffee, there was enough light to see the birds on the ground. The mixed flock of sparrows included Song Sparrows, a few Chipping and White-crowned Sparrows, and many White-throated Sparrows. Among the latter, there was a great deal of variation, but looking carefully I could see many whose white throat was a small, dirty white patch - juveniles. From the thick protection of the scrub roses, these were the ones I suspected of singing their incomplete songs. 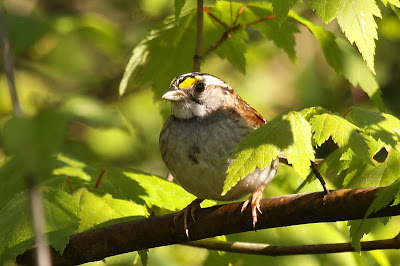 White-throated Sparrows are transients in my neighborhood. At 700 feet, I am too “tropical” for these northern nesters. I have seldom heard their territorial singing at much less that 1200 feet. The higher into the Green Mountains I have gone, the more common they are during the summer.  They are a northern breeding species, so much so that our neighbors to the north render their song as o-canada-canada-canada.

As a group, sparrows often pose many frustrations to bird watchers. Collectively they are known as “little brown jobs” or LBJs. The adult White-throated Sparrow in fresh breeding plumage is a welcome exception; it is readily recognizable with its bright white stripes on the head, bright yellow lores above the eyes, and bright white throat.

But, try to remember next Spring when these sparrows pass through your neighborhood to look at them carefully. Having survived the winter, all will be adult birds and potential breeders. You will notice that some have bright white strips on the head, while others have tan stripes. These are not sexual differences, but color morphs found among both males and females. 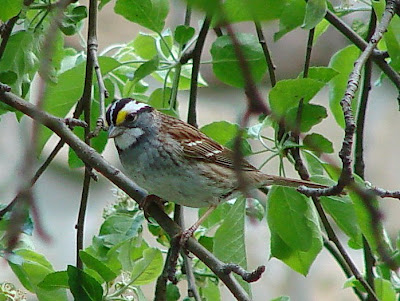 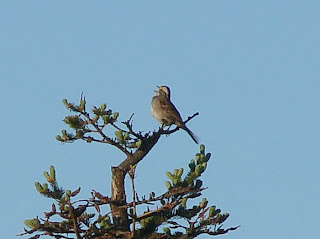 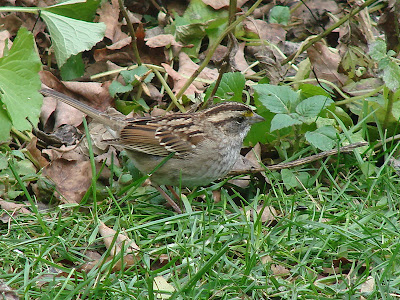 Research has established these behavioral differences between the two color morphs, but has yet to figure out why it occurs or what sort of advantage there may be in this behavior.

It was mid-day when I returned to my desk to continue writing. The White-throated Sparrows were no longer singing. Come Spring, the singing will begin before sunrise and continue through much of the day, but for now the incomplete songs of the young birds are being practiced only at the day’s first light. (Having put the period on the previous sentence, I then heard a single White-throat sing - so they practice mostly at the day’s first light!)

very nice post - I have started seeing and hearing these guys just the last 2 weeks, more and more.. One of my favorite songs to listen to

...wonderful post. I always love seeing and hearing these birds. Spring isn't spring until I hear them singing their beautiful song. I've been watching, but none have dropped into our yard yet. Rick and I are on the lookout to spy our first junco or white-throated sparrow.
p.s. Our white-throated sparrows seem to have the "Oh Sweet Canada, Canada, Canada" accent ;-) ...maybe it's because we have two hockey players living here!

Very interesting post! I still have yet to see a White-throated Sparrow myself, but I look forward to seeing and hearing them even more now!

A few days ago a flock of red-winged blackbirds moved through our scrubby/creek area. I heard their territorial singing and wondered what was up. Perhaps they too have juveniles practicing? -- barbara

Hi Chris,
Oh man, I really enjoy reading this nice post, and really like the story of the two behavior.... It would be nice if scientists would involve more time to understand these behaviors and maybe establish if this is an adaptive behavior of some sort, related to the mating or not and if it's maintaining genetic diversity for example! Well pretty interesting things anyway! Got nice pictures of a bird I would like to see one day!

The photo of the couple on the high spot on the tree; how lovely!!

I liked this "song" lesson very much; indeed: our bird concerts in the tuscan woods did change also!
You would love it too and especially recognize all the different species; as you are a fantastic expert in this "field"!!!!

What a delightful post! I'm so glad I stopped by for a visit this morning. Happy New Year to YOU!! Post more!! ~karen