Blue Jays on the Move 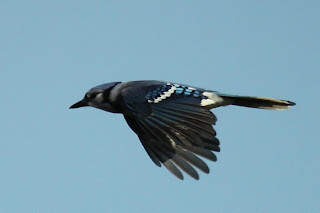 A single Blue Jay braked his wings and landed atop the pine tree. “Jay ... jay,” it said. A second stopped among the bare branches of the neighboring birch tree. “Jay ... jay,” it replied. More Blue Jays added to the conversation, and a third found a branch as it joined the first on the pine tree. The fourth jay chose another birch and a fifth took the maple with a few clinging red leaves. 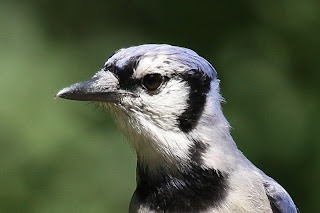 Like antsy children unable to sit still, each bird shifted about on its perch for additional views, crest up, head turned, cocked. And back and forth went the conversation: “jay, jay,” “jay, jay,” “jay, jay.” Number six and seven responded “jay, jay,” as they appeared briefly above the tree tops, then disappeared into branches behind the pine and in a tree that still held its leaves.

Number one and two scanned the skies and trees, as though on a reconnaissance for their colleagues. “Jay, jay ... jay, jay” in a variety of tones and pitches, gurgles and glumps, a complex communication language which conveyed information and offered opinions just as clearly as any of the thousands of languages spoken by our species. Their Blue Jay conversation became intense, even raucous, but only the ignorant or arrogant among those humans who listen would call it mere noise or meaningless babble. 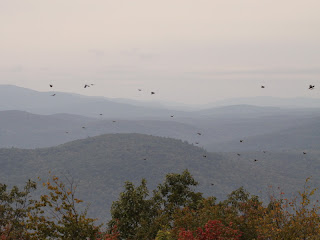 “Jay, jay ... jay, jay.” As though everyone were talking at once, the conversation hit a crescendo. Then they all fell silent for beat one, beat two, beat three. A single, “jay.” And then the Blue Jay atop the barren birch tree took flight. Six more followed the lead, white breast and dark wings briefly silhouetted against the blue sky as each launched upward quickly, then as quickly leveled out and flew low across the ridge top clearing.

“Seven,” said a watcher seated on the ridge below, and then continued to count: “8, 9, 10, 11, 12 ....” as Blue Jays continued to appeared just above the tree tops and then follow the leaders’ low flight across the ridge and down over the tree tops into the valley. “... 21, 22, 23 ...”  For a few moments no birds appeared in front of the watcher. Then there were more flashes above the tree tops as four more came to a brief pause around the pine before continuing the flight path established by the reconnaissance party. “34, 35, 36, 37.” This time there were longer moments with no new birds. Finally, a straggler made the flight. “38.” The watcher waited a little longer, just to be sure, and then the number was recorded in the notebook.

Blue Jays are on the move. 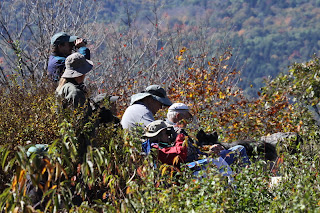 The men and women who count hawks on the Putney Mountain ridge might appear to be narrowly focused and even obsessive about watching hawks. But they have a much broader interest and fascination with birds and the world in which we live. Raptors overhead may be the focus, but often long stretches pass when no hawks are flying, and when they do fly, often the hawk is here and  and there and gone. 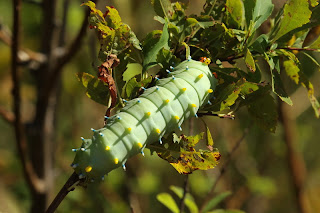 Curiosity and broader interests then capture the attention of those hawk watchers - like the green snake warming itself at the edge of the bushes. Or the three inch green Cecropia Moth caterpillar, with its yellow, red, and blue nodules.

Or the unfamiliar chip note coming from the shrubs which sent someone in quest of the bird and a new addition to the repertoire of recognized bird calls. Or the morning fall-out of migrating warblers gleaning insects and scarfing berries, refueling before restorative rest.

And then there are the Blue Jays, conspicuous and numerous. Curious about how numerous the jays are, some years ago the numbers started to be written down. Hundreds passing over the ridge in a single day are not unusual. This has been a good year. About 2500 Blue Jays have been counted.

As with any inquiry, gathering one piece of information or answering one question leads exponentially to new questions. Where did they come from? Where are they going? Do they leap frog over the Blue Jays who fed their young in my back yard this summer? Are my Blue Jays year-round residents, or do they move south to be replaced by birds from the north who perhaps pass over the Putney ridge?

I don’t know. One piece of wisdom which birdwatching constantly reinforces is the vast expanse of my ignorance. The corollary piece of wisdom is to distrust anybody who has all of the answers. Hang out with people who know how much they don’t know, and you are probably hanging out with wise people from whom you can learn much. 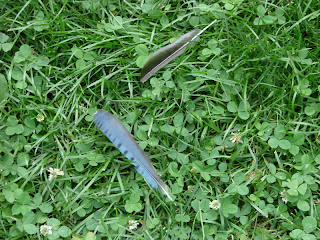 Blue Jays. A month and a half ago I watched a flock of Blue Jays harass a young Sharp-shinned Hawk which responded by ineffectually chasing the jays. Blue Jays are sentinels to danger. Their loud conversations and perpetual nervousness at bird feeders is essential to their survival. I find blue feathers on the grass. The feathers are from the wings or tail of a Blue Jay that was momentarily inattentive, or a fraction of a second too slow. The feathers are a sign that a hawk has fed. 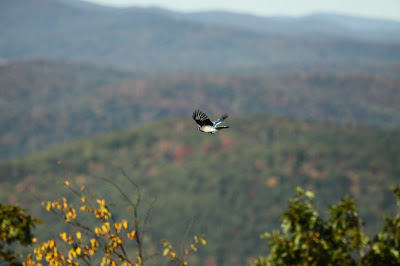 When the Blue Jays nervously survey the opening atop the Putney ridge and communicate loudly among themselves, I am quite sure that they are looking for danger. Somehow they know that the Great Horned Owl in the tree top is a harmless plastic fake. They fly past it without a hesitating glance. They are moderately attentive to the voyeuristic hawk watchers seated on the ground. But this time of year when the Blue Jays are moving south in search of places with enough food for the bleak winter months ahead, the hawks are also moving south with the same purpose in mind. The sharpies and coopers, the merlins and peregrines are migrating. They also need food. They are a danger. The Blue Jays scout the skies and trees along the ridge before moving into the unprotected open.

Email ThisBlogThis!Share to TwitterShare to FacebookShare to Pinterest
Posted by Chris Petrak at 6:00 AM
Labels: Blue Jay

Nice Post Chris - been seeing a lot of jays on the move here as well.

A lovely essay ... I love blue jays. My husband and I often wonder, "If they weren't so common, would people notice and admire them more than they seem to do?" They are beautiful, smart, and enterprising. This morning while birding in central CT I watched a stream of blue jays come through, stopping and feeding much as you described ... jay, jay ... and now at home, I'm watching others come and go at the feeders... jay, jay. Thanks for this beautiful essay.

Blue jays are the alarm system in my backyard. Right now I have a coopers hawk that makes rounds. I can usually tell when 5 or 6 of them are complaining at once that he's in the neighborhood. They've helped to save countless mourning doves.

OK you asked the same question that I would like to know. Who are the Jays that stay the winter in my yard. Where do they get their food? Or what do they eat for food? I have a large grandfather white oak that produces hundreds of acorns every other year. This is the year for its bumper crop yet fewer Jays are taking advantage of the acorns than two years ago. Why is that? I am just throwing out observations. -- barbara

Blue jays are such handsome and striking looking birds, yet are usually under-appreciated by most folks. I am glad they are being counted as they move south ahead of winter. Thanks for bringing them to our attention.

What an interesting idea! Maybe the Blue Jays I watched growing up this summer are heading south, and the ones I see today came from farther north. I'd love to know for sure.

Hi Chris,
Thanks for this very nice post. I love this bird but has never seen otherwise than through blogs ;-)

Hi. Happened to find your blog through "Next Blog" button and found it very interesting. I am a keen amateur photographer, but not with the same impressive equipment as you have! I read through your Photo tab, and I have a question out of curiosity; Why do you change them to TIF? I found that you lose the EXIF info then. And the file gets larger. What is it you know that I don't? ;-)

Such a nice post, Chris! And great photos, too. A lot to ponder there. ... I'm ignorant as well - we see Blue Jays moving through in spring and fall. In fact, heard quite a few on an Appalachian Trail hike in central Virginia on Saturday. But I'm pretty sure they are around are area all-year. Are they short-distance migrants? Do some migrate and some not? Birding always brings more questions!

Very nice picture, and your blog is fun to read and watch. I like your blog very much. Come take a look Teuvo images www.ttvehkalahti.blogspot.com blog and tell all your friends photos on your blog Teuvo fermentation that can be your ticket to climb higher on my blog. A very good continuation of the autumn you Teuvo Vehkalahti Suomi Finland

Wow that's a lot of Bluejays! I really enjoy watching them in our yard. Often comical. I can imagine how enjoyable it was viewing so many. Great post.

I love jays also especially the scrub jays we have in California. When I go hiking, they hop from branch to branch to check out what I am doing. I consider their behavior a sign of intelligence and curiosity. I have several feeders in my yard that mostly attract the finches and sparrows. But I do put out some peanuts for the jays. I don't see anything wrong with this since everyone seems to be happy. But I have heard that the jays can disturb small bird nests. I'm wondering if you have witnessed this. I don't want to stop feeding the jays. I enjoy seeing them in my yard.