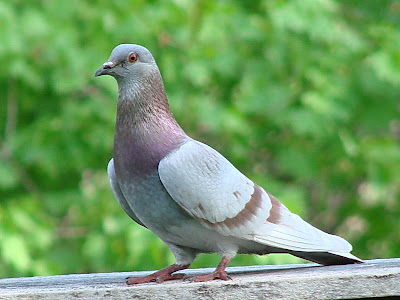 Pigeons - they’re one of the few birds that almost everyone seems to have an opinion about. After my earlier columns on pigeons, I received many comments from people with a high regard for them, including some wonderful anecdotes and original poetry.

I have not heard from the pigeons haters, those who consider them avian rodents, public pests, and a danger to the health and well-being of humans. Birding friends who sometimes comment on my columns have been conspicuously silent, almost as though they could not understand why I would spend time writing about these birds, or because they were embarrassed that a bird watcher would give them attention.

I will admit that my attitude toward pigeons has been ambivalent. When I see a large flock of town or urban pigeons swirling around roof tops, or notice their white droppings splattered across building facades, the statue in a public park, or the girders beneath a bridge, it is difficult not to mutter “rats with wings.” But when the first pair started coming to feeders behind my rural home, I was struck by the beautiful and varied colors of their plumage. I remember years ago, in the great public plaza in front of Saint Mark’s Cathedral in Venice, Italy, being simultaneously disgusted by the vast numbers of pigeons scavenging the paving stones, and charmed as they landed on my wife’s shoulder and out-stretched arm, seeking the crumbs from our leftover breakfast rolls.

Pigeons are feral - domesticated birds which have escaped from their urban dove cotes and naturalized themselves in the urban landscape. They are creatures trying to make the best of the cards dealt them - just as many of the people with whom they share habitat are trying to do. Their lot can sometimes be capricious.

In North America, the Rock Pigeon is one of three species that has no protection. (The European Starling and the House Sparrow, also exotics, are the other two.) They can be captured, caged, or killed without restrictions. The clay “pigeons” used by skeet shooters are a reminder that live pigeons used to be the target of this sport. There are still a few gun clubs that capture pigeons and use them as targets. The public pressure on these gun clubs is tremendous and they do their best to keep below the public radar.

The three exotics are used by hawk banders to lure migrating hawks into their nets. The pigeon is especially useful in attracting the larger hawks, such as the Red-tailed or Goshawk. Banders  are careful to protect their lure birds, but when a powerful predator strikes, wounds can be inflicted.  I once spent a day with at a banding station. When the lure pigeon was injured, it was carefully tended to and returned to its cage. A few days later, when the wound healed, it was released.

In the wild urban or town landscape, pigeons do not have that protection. They are favored prey by the urban hawks. Pale Male and his mate, the Red-tailed Hawks who nested on Fifth Avenue in New York City, raised their young on Central Park pigeons.

There are pigeon lovers in the cities, but most city dwellers consider them pests - dirty, filthy, and disease ridden. In 1959, Tom Lehrer waxed poetic about “Poisoning Pigeons in the Park,” and a New York resident has written a book which describes 101 ways to kill a pigeon. 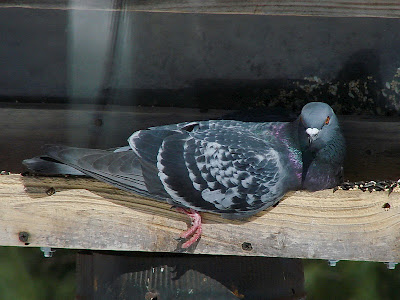 We may not be able to end prejudice (prejudice, after all is based on ignorance and ignorance, though stupid, is hard to overcome) - but we can at least set the record straight. First, pigeons may be called “rats with wings” but there is no evidence at all of pigeons carrying plague. There is little, if any evidence, of pigeons transmitting diseases to human. It is true that pigeon droppings are unsightly. Their acidic dung eats at stone and metal and perhaps breeds parasites and bacteria. But ancient Egyptians treasured pigeon droppings as a valuable fertilizer rich in nitrogen. “For centuries in England, only the wealthy were allowed to raise pigeons for food, and the feces were declared property of the crown. The valuable dung was used to manufacture saltpeter, a critical ingredient for making gunpowder.” Part of the contemporary problem is that we import all of our resources, while  shoveling up and dumping the resources close at hand.

“Pigeons” by Andrew D. Blechman (2006) tells the story of “the world’s most revered and reviled bird.” It is as much a book about people as it is about the Rock Pigeon. In one chapter, Blechman tells about his attempts to interview a passionate pigeon lover - Mike Tyson, the former heavyweight boxing champion. He never did get the interview, but a couple of brief paragraphs provide insight into the connection between the pigeon and the human urban dweller. Tyson was born to poverty and grew up on the streets of Brownsville, Brooklyn. “Some describe his existence then to that of a feral cat, rummaging for food and sleeping in abandoned buildings.

“The one thing that kept him occasionally in check was his love of pigeons. Wildlife is hard to come by in Brooklyn. But there are always pigeons. For an awkward boy with a lisp, pigeons were easy companions. Tyson spent countless hours on rooftops squinting into the sky, watching his pigeons soar higher and higher. These birds knew freedom, and just observing them gave him a measure of calm and hope. Caring for them - feeding them, holding them in his outsize hands - gave him a measure of empathy and routine.” (Blechman, p164-5) One wonders how much more troubled Tyson’s life might have been, or be, were it not for the “humanizing” influence of pigeons.

Pigeons were first domesticated as a food source, and they continue to serve that purpose even today. Originally they were a poor persons’s food. They were an inexpensive sacrifice which could be made on the altar of a god or goddess and then consumed by the one who offered the sacrifice. Today they are a gourmet delicacy, called squab, providing “a dark, moist, delicate, and oh-so-tender flesh that can be served rare enough to melt in your mouth.” They are raised and processed in pigeon plants which are every bit as mechanized and organized as any poultry plant. The pigeons  raised in these plants are as far removed from the wild pigeons in our parks as factory chickens are from barnyard chickens, or barnyard chickens are from wild cousins like grouse.

Some of the most passionate pigeon lovers are those who raise and train homing pigeons, often for competitive racing. Blechman quotes one enthusiast: “‘I’m thinking about pigeons twenty-four hours a day,’ he says jovially. ‘I’ve only got one life to live, and I want to spend mine racing pigeons.’”

Others are just as passionate about breeding pigeons for plumage variations, genetically “manipulating” the birds to achieve giant fanned tails, feathers that curl like corkscrews, or unusual  combinations of hues and colors. Less extreme are those who breed white doves, often for dove releases at weddings or funerals. These homing pigeons are Rock Pigeons, but of a much higher order. According to DoveReleases.com: “Homing pigeons are to Feral Pigeons as thoroughbred horses are to plow horses.”

Even among those who love pigeons, there are opinions and prejudices toward the wild birds. But like most issues in life, the predominant color is rarely black and white, but gray. Pigeons will never rank among my favorite birds, but neither can I dismiss them as flying rodents.

Email ThisBlogThis!Share to TwitterShare to FacebookShare to Pinterest
Posted by Chris Petrak at 6:00 AM
Labels: Rock Pigeons

They are everywhere in the city, but I still love them:)

I loathe the starlings and house sparrows because they displace native species and have caused real harm to them. The pigeons seem to stay mostly in the cities where they have a smaller ecological impact. A few small flocks may be found in agricultural areas.

The variety of plumages in the feral population is astonishing - they are very beautiful. They are rather a pest and cause headaches for property owners. But pigeons are an excellent and abundant food source for the peregrines, red-tailed hawks, and other raptors that are moving into American cities. The raptors will help keep the pigeon populations in check.

Great post and images, the Venice image of feeding the pigeons and the nonchalant pigeon relaxing at the feeder made me smile.

If there are pigeons flocking around, call a professional to remove them with ease and comfort!