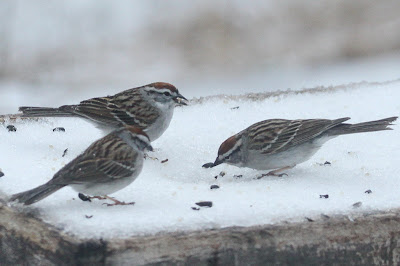 Last Saturday it snowed in my yard, as it did in many of your yards. Heavy wet snow slid off the metal roof through the day with the schlump, schlump, schlump sound that I am accustomed to hearing through the dark winter months. But this was the third week in April. Those schlumps of snow fell on yellow daffodils, and lavender and purple crocus.

The day was all wrong. The day should of been one of raking leaves from garden beds, cleaning yard debris, cutting back dry canes, and complaining about the aches caused by sudden muscular activity after months of winter idleness. I could not muster the old-timers’ philosophical resignation: “This is Vermont, after all. Got to expect weather like this any time.” I coped with the disconcerting, out-of-season snow by drawing the blinds. 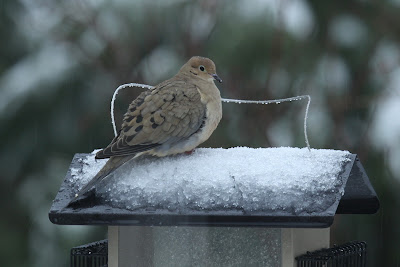 I did made regular journeys to the kitchen for coffee and tea. The birds in the back seemed bedraggled as they scratched the fallen bird seed from between clods of snow. The business of eating was their only activity. Most appeared to have suspended their most important activity during a normal third week in April. They were not doing much singing and very little displaying. Occasionally a cowbird would posture, but nobody seemed to care much.

I may be projecting my mood onto the birds. Once their gonads begin to increase many fold sending hormones through their system, the life of birds is directed toward reproduction. It is a powerful force that controls their activity for several months during the year. A Spring snow is a mere bump in the road, one that may be a final natural selection which removes those who don’t really have the moxie to breed. These are the bird which just barely survived winter.

That said, I still feel like anthropomorphizing the birds during last Saturday’s snow. Some looked as though they were completely baffled by the weather. Chipping Sparrows had a nonplussed appearance. Three to five Chippys mingled on the platform feeder, occasionally pecking at a seed, but mostly milling around as though they were wondering what had happened to the party they had come for and what should they do next.

Chipping Sparrows winter in our southern states. They do not have nearly as long a migration as the tropical species (the warblers, for example). They arrive in mid-April. Probably the males come first, each with the compulsive intention of claiming the best territory, and then claiming the best female with whom to breed and raise young.

Having to scratch through snow to get the seed on the platform was not on their agenda. As one of the other columnists in this paper likes to ask, “What the hell’s up with that?”

But, it is time to move away from the rant. The snow is gone. Snow out in my yard was on Tuesday, the latest date since I have lived here. Spring has resumed its staggering journey toward full blossom. 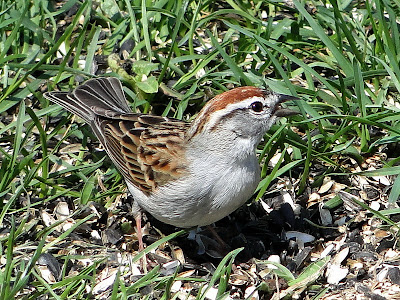 The birds are back on track as well, if they ever really got off track. Those Chipping Sparrows did not continue long in bafflement. “Battle” better defines their activity in the Spring, and they are in full battle mode. I heard the end of one day’s battle on a drippy morning this week.

Edward Forbush, the Massachusetts ornithologist, was a remarkable observer and chronicler of New England bird life. I read his species accounts with pleasure. But this week I found a nit to pick with him. He describes the song of the Chipping Sparrow as a “simple monotonous series of dry ‘chips,’ rapidly repeated.”

That is not what I heard at 6:30 am. I heard four distinct songs from four different males. One produced clear, slowly-paced, distinct, whistled chips. Another produced slurred whistles. Another offered dry and mechanical chips. The clear whistler sang his song solo. A second male broke the brief silence. Two birds sang together, until silenced by the power of the clear whistler.

When I stir into my morning semi-consciousness, the first bird I hear singing is usually the robin. I have slept too late. Chipping Sparrows begin their musical duel before dawn and conclude the battle when most of us are just waking up.

Donald Kroodsma (The Singing Life of Birds, 2005) describes his study in a Massachusetts cemetery of the early morning song duels in which Chipping Sparrows engage. The study required that he be on the battle ground by 4:00 am. The sparring begins around 4:30. Here is a part of Kroodsma’s description:

“Bird D now sings from the cul-de-sac, also sputtering brief songs from the ground, but then I hear him just to my right, the bird in the cul-de-sac now silent. He’s moved. A is to my left, B in front of me, and D to my right, all three singing phantoms within five yards of me, all unseen, all on the ground or a gravestone, each sputtering his distinctive song. B delivers, but he’s cut off by D, whose song in turn is overlapped by A. Sometimes they alternate, sometimes overlap, but I cannot keep track of who plays what role in this game.” 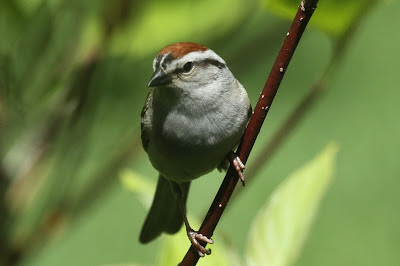 Eventually the birds move from the ground to the trees. Paired males are mostly silent during the day. Bachelors keep singing. Kroodsma again: “If territories are widely disperse, it seems that the males still convene at a traditional location, sparring there even if some of the males don’t own territories that border that place. The older, dominant males begin the dawn singing on any given morning, and an older bird more often overlaps the songs of a submissive or younger neighbor, rather than the other way around. To interrupt a singer, to cut him off, is a strong, aggressive message.”

The Chipping Sparrow is one of those birds that many would describe as “sweet,” or even “cute.” It is a handsome little bird, especially in the Spring when it returns in crisp, fresh plumage: a clean, gray breast, rusty red cap, white stripe above the eye, black stripe behind the eye. It does not bully other birds. If anything, it is bullied by other birds. It is not noisy. It goes about its own business, and minds its own business.

The males on the snowy platform feeder were only momentarily quiet. The bafflement I saw in their postures was almost certainly my projection of my mental state unto them. During this time of the year, the Chipping Sparrow’s mental state is focused on one thing. Sex.

If the weather stays warm and I can finally get outdoors, the Chipping Sparrows’ mental state will mean one thing to me. Good birding!

Email ThisBlogThis!Share to TwitterShare to FacebookShare to Pinterest
Posted by Chris Petrak at 6:00 AM
Labels: Chipping Sparrow

nice post on the Chipping Sparrows. They are sweet birds but fun to watch them interact.