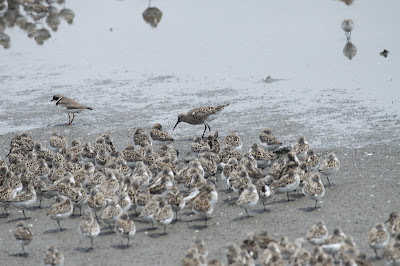 Thousands of shorebirds roosted on the mud flats of the impoundment at Heislerville Wildlife Management Area along the Delaware Bay shore in southern New Jersey. Maybe the number was more like tens of thousands; I have no skill in counting such massive numbers. For certain, the numbers were huge. I was at or near the peak shorebird migration. I saw numbers that I have not seen for many years.

When huge numbers of birds are present, the odds go up that somewhere a rarity is present. On this day, a rarity was present - a Curlew Sandpiper. A Eurasian species, the Curlew Sandpiper nests on the tundra in northern Russia and winters in southern Asia, Australia, and Africa. Almost every year a few do not read the range map in the bird guides and appear where they are not supposed to be along the coast of North America.

The last couple of years, Curlew Sandpiper was reported at the same Heislerville WMA that I visited this year. I had made rather half-hearted attempts the last two years to chase the bird, but my timing was poor. I arrived at the impoundment when the tide was going out. Most birds feed during low tide when the rich mud flats are exposed, so there were fewer shorebirds present. The last two years I did not have the time to linger and search, or to adjust my presence to the tides. I can only manage a couple of days each Spring for bird rich southern New Jersey. It is my once-a-year shot at seeing birds that I won’t see in Vermont. So I spend my time looking for those birds. 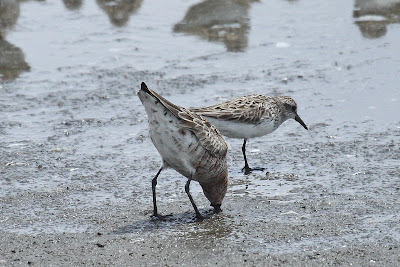 This year my timing was better. At the Cape May Bird Observatory that morning, I learned that the Curlew Sandpiper had been present the day before, and that the tides were favorable for shorebirds to come in to the impoundment in the early afternoon to roost. The overcast skies did not make for good songbird photography, but would provide plenty of light for shorebirds. I decided it was time to “chase” a bird.

Shorebirds can be very difficult to learn to identify. They are often perceived as small gray and white birds that all look alike. That is an understandable, and rather accurate, perception. Some, like the Dunlin or the Black-bellied Plover, take on distinctive and striking characteristics during breeding season. Ruddy Turnstones and Semipalmated Plovers also have features which set them apart in most circumstances. 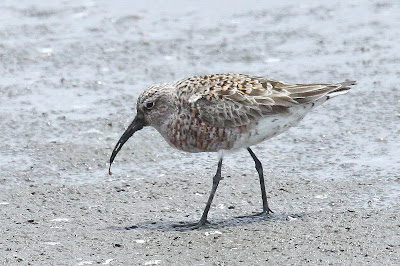 Even so, put tens of thousands of shorebirds together in a collection of roosts in an impoundment, and those distinguishing characteristics will meld into a single homogeneous organism. When something spooks the resting mass, like a passing hawk, they fly as though they were one organism, swelling and veering and coming back to rest as though directed by a single, interconnected guidance system. 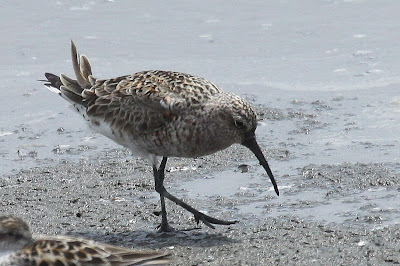 As I approached the impoundment for the first time, I had to make a choice. I could work my way around the impoundment scanning each massive roosting flock, looking for the single bird, the Curlew Sandpiper, that was different. Or, I could look for other birders and ask them if they had seen the Curlew Sandpiper. The most satisfying way of adding a bird to one’s life list is to find the bird on one’s own. The most assured way is to ask others. At the far end of the impoundment, half a dozen birders stood with binoculars and scopes pointed toward the roosting flocks. They were my first stop.

I made a good decision. In about five minutes, I focused on the Curlew Sandpiper as it fed along the edge of the water among a few other feeding sandpipers and thousands of roosting shorebirds. The decision became better; this Curlew Sandpiper had not molted completely from non-breeding to breeding plumage. In the gray light of that day and from a distance, it looked like a plain gray and white bird. Off and on when the sky brightened, I could see hints of the brick red plumage in the process of emerging. The molt was more obvious several days later when I examined my photographs at home, but in the field, the molt was not readily apparent.

A second “brick-red” Curlew Sandpiper had also been seen the day I was there. I spent the next hour looking for that bird, while returning periodically to the molting bird. Finding the molting Curlew Sandpiper again and again proved rather easy. It was larger that the peeps and plovers and more elegant and longer necked that the stocky Dunlin.

I have not been able to find very much anecdotal information about the Curlew Sandpiper except for this: The numbers of this species vary considerably from year to year depending on the population of lemmings on the Russian tundra. In poor lemming years, predatory species such as skuas and Snowy Owls will instead take Arctic-breeding shorebirds, like the Curlew Sandpiper. 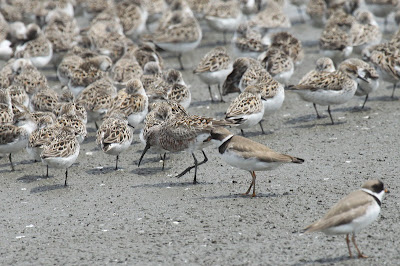 Further along, a few lone peeps and plovers were feeding on the mud flats close to the service road. A spot of color caught my attention. Even from the car, and without binoculars, I could see a small shorebird with a hot-pink breast. For certain, it was not the Curlew Sandpiper I was looking for. But what was it? I pulled to the side and scrambled out of the car with camera in hand.

By the time I had taken my photographs of this hot-pink breasted sandpiper, I knew what it was. But I did not know the full story until I was back home processing my photographs and had done some internet research.

But I am out of space for this week. Please come back next week for the story of the sandpiper with the hot-pink breast.

Email ThisBlogThis!Share to TwitterShare to FacebookShare to Pinterest
Posted by Chris Petrak at 6:00 AM
Labels: Curlew Sandpiper

Excellent post Chris and ncie sighting. We do also have one in Iceland at present but I'm in Tromso ;-)

My son just saw one out west. Thrill of a lifetime according to him!