I see this bird several times every year, but those sightings are usually very brief ones as the bird flies across the road, or an opening in the forest. Fifteen years ago, I sat on a wooded slope in central Pennsylvania and watched one excavating a hole. Wood chips flew everywhere. I was not a photographer then.

Last year I had an excellent opportunity to photograph the Pileated Woodpecker - it was close to a trail I was on, working a fallen tree close to the ground. But I had violated Rule #1 for getting good photographs. I did not have my camera with me!

Early Sunday morning I carried my camera and binoculars from my apartment in a high rise building in Philadelphia down to the parking lot. Part of the parking lot is lined with large trees which screen a major city road. The road runs parallel to the Wissahickon Park - a significantly large piece of nature in the middle of the city.

I heard tap-tapping. I glanced casually, saw some red, and thought, Red-bellied Woodpecker. But I looked closer. A Pileated Woodpecker was busily pounding on a dead branch.

Then - grab the camera. Turn it on. Shoot off the documenting shots. Then work around for better views, better lighting, new angles. For about 15 minutes I photographed the bird as it worked along dead limbs. 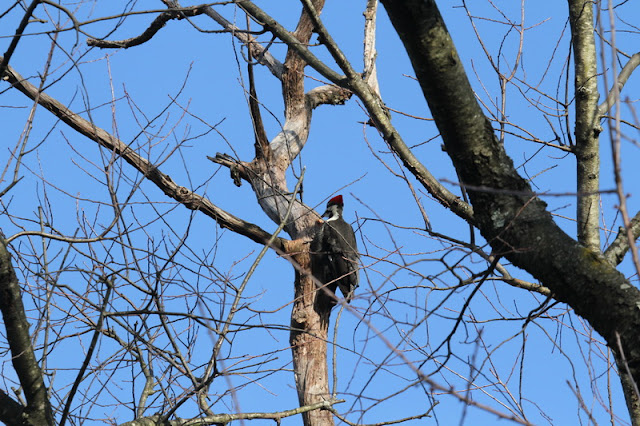 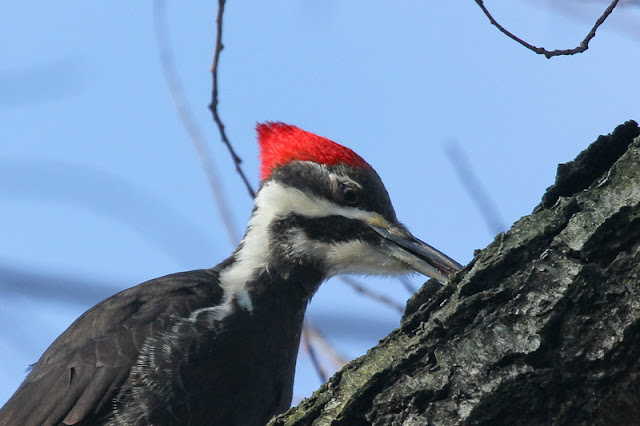 I was so busy photographing the bird, that I almost missed the fact that there was a second bird present ...

But he was cooperative, and stayed around to work the tree with his mate ... 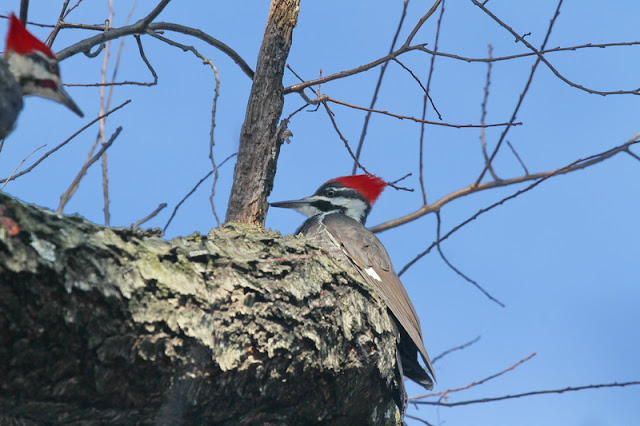 Then for a couple of minutes, the pair worked the same limb, rapidly tapping in tandem. It was eerie, almost as though one were the mirror of the other.

When the pair finally flew, I continued to Heinz NWR for a morning of birding - a morning that was good in the very first few minutes!

How glorious. It's amazing when we get more than a glimpse, but have the opportunity to really watch.

How cool, love your series of pictures. I also have a family of pileated woodpeckers living near our home.

thanks for sharing, I love your site.