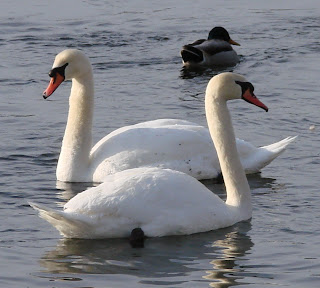 An apology ... sort of. Every so often someone will excitedly call me or e-mail me: “Did you see the swans!?” I can seldom respond with any enthusiasm. Because - the swans that are being reported are usually Mute Swans, and unfortunately the presence of Mute Swans is not good news.

Mute Swans are elegant birds - luxuriant pure white plumage, long sinuous necks, graceful swimmers. But they are not native to North America, and like other introduced birds, they pose a threat to native species.

World-wide, there are seven members of Genus Cygnus (from the Latin for swan, coming from the Greek kyknos, also meaning swan), although typical of taxonomic classifications, there is debate whether some subspecies should be accorded their own species status.

Two swans are native to North America. The Trumpeter Swan, the largest native waterfowl in North America, has been returned from the brink of extinction and is being reintroduced in many parts of its former breeding range in Minnesota, Wisconsin, Michigan, and Ontario. There are no recent records of the Trumpeter Swan in Vermont.

The Tundra Swan is our smallest swan, short-necked and gooselike. It nests on the Arctic tundra and migrates to wintering grounds. Many winter along the mid-Atlantic coast. A few may be seen in Vermont during Spring or Fall migration. Most recently, in November 2003 and 2004 Tundra Swans stopped briefly in the Retreat Meadows. The bill of the Tundra Swan is black.

The adult Mute Swan is most readily identified by its unique orange bill and the black mask with forehead knob.

In the last few years, the Mute Swan has become the swan most likely to be seen in southeastern Vermont. Last year a pair nested in the vicinity of the Hinsdale setbacks. To my knowledge, this was the first successful nesting in our area. Murin and Pfeiffer in Birdwatching in Vermont, report that the Mute Swan has “nested in Vermont but the Vermont Fish and Wildlife Department probably won’t allow a repeat performance.” 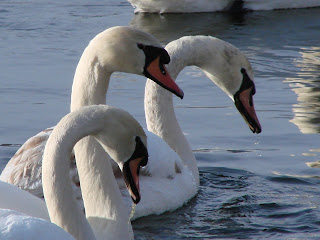 So, what’s the problem? First, some background. The Mute Swan is native to Europe and western Asia. Its nature and character (elegant, aggressive, silent) made it the subject of many myths and legends. Occasionally it was domesticated for food. More often it was kept as an ornament in the gardens of the nobility beginning at least as early as classical times. The Mute Swan is the national bird of the Kingdom of Denmark, while in Britain, the Crown retains the right to ownership of all unmarked mute swans in open water. Magnanimously, the Queen only exercises her ownership on certain stretches of the Thames and its surrounding tributaries. Swans continue to be a feature in the public parks of Europe.

In the 1800s, many growing American cities expressed their civic pride through the creation of public gardens, complete with paths and ponds. The ponds were decorated with Mute Swans brought from Europe, their wings clipped to keep them in the parks. The pampered swans enjoyed an easy life, settled down and raised families. Naturally long lived (nineteen years is the record for a banded wild swan - thirty to forty years is not uncommon for captive swans) swans often outlived the ponds and estates which kept them. They, or their offspring, went wild. With a high reproductive rate, a lack of natural predators, and an abundance of suitable wetland habitat, these feral Mute Swans have established significant populations, especially along the Atlantic Coast.

A survey conducted in the summer of 2002 found over 14,000 Mute Swans in the Atlantic Flyway. This number had doubled in just sixteen years. The pair that nested in Hinsdale on the Connecticut River last summer raised five young. About fifty swans are wintering in the Turners Falls area. As recently as ten years ago when I moved to southeastern Vermont, Mute Swans were a rare occurrence.

The growth of the Mute Swan population causes several ecological problems. They have voracious appetites and often are a year-round presence. They are capable of disrupting the natural food chain. “Several studies have documented large reductions in aquatic vegetation, and even the complete disappearance of certain plant species in some locales, because of heavy grazing by mute swans. In some areas of the Chesapeake Bay, efforts to restore native vegetation have been seriously hampered by foraging mute swans. In turn, there is a negative impact on native wildlife and fish species that depend on these plants for food and cover.” 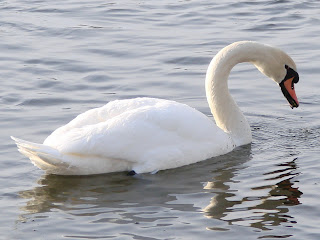 During breeding season, Mute Swans maintain a four to ten acre territory, aggressively driving off any intruders, including native species attempting to nest. They have caused terns and skimmers to abandon their nests and have killed Mallard ducklings and goose goslings. Their aggressiveness is sometimes directed toward other animals and even humans. They can be, at the least, a nuisance to pets and people, and perhaps even a danger.

“Adults are not paired for life, contrary to the stereotype of the ‘pining swan’ who has lost its mate. In fact, some have been observed to have as many as four mates, or even ‘divorce’ one mate in favor of another. However, established pairs are more successful breeders than non-established pairs and mute swans do form monogamous pairs for at least a season.”

Ironically, Mute Swans seem to be the only effective control on Canada Geese nesting in many areas, but any benefit derived from limiting the goose numbers is outweighed by the damage the swans cause to aquatic vegetation. On the other hand, their need for a large territory directly competes with the Common Loon, which also needs a sizeable nesting territory. As the native Trumpeter Swan continues its recovery, it may also find itself competing with the Mute Swan for nesting territory. 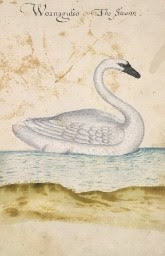 In the interest of being as fair to the Mute Swan as possible, there is some evidence that it may have been, and therefore may still be, an occasional vagrant to North America. In 1585, while on a scientific exploration to America for Sir Walter Raleigh, John White painted a watercolor which he titled simply, “The Swann.” In the 1960s the British Museum labeled it as a Trumpeter Swan,” probably because its bill is black. However, scientists at the British Museum “say that lead in the paint used by White has degraded over the four hundred years, turning some colors grey or black. The curved neck, the knob, the lifted rear feathers, the entire countenance are consistent with Mute Swan. Research on the painting continues, as does debate as to whether the Mute Swan might have, or could today, occur naturally in North America.

Quotations are from the web site of Pennsylvania Game Commission and from wikipedia.org.

Email ThisBlogThis!Share to TwitterShare to FacebookShare to Pinterest
Posted by Chris Petrak at 7:11 AM
Labels: Mute Swan

who is indigenous on this continent? Who are we to decide who lives and who dies. These are the issues at hand. Maybe we shouldn't be playing god here and allow nature to take its course.

God did not introduce the mute swan to North America, humans did. Sometimes we need to undo the mistakes of our forefathers (or our own generation) in order for nature to take a more, well, "natural" course, if you will. By the way, when we introduce species to new environments, either intentionally or unwittingly, we are definitely interfering with who lives and who dies.

Yeaaaah so....get your facts right there, whoever first posted a comment....It seems as though you didn't even thoroughly read the title which included the term invasive, which by definition means a species transported to a habitat where it does not belong...Although it sometimes can be natures doing, this of course was not. So before you go posting your righteous "We should let God deal with this!", get your shit right, partner.

Why is man bringing trumpeter swan eggs from Alaska to Michigan where they don't belong. Perhaps they are hoping that the trumpeter will flourish and they can charge a good price for a permit and the waterfowl hunters will be able to shoot their TROPHY BIRD.Or, perhaps once the mutes are gone, the Canada Goose population will be so great that they can extend the hunting season on them and make more money from permits and maybe it would increase hunting interest. According to some reports, they don't even know for sure that the Trumpeter is native. According to someone at a flyway meeting a few years back, someone asked about the Trumpeters nativeness and someone replied they read somewhere they were introduced in the 1800's and they said "ok, let's go with that". No hard facts needed. How can Michigan base their facts on studies done in Maryland when Michigan has 26,857 natural lakes as Maryland has "ZERO" natural lakes. How come pesticides, fertilizers, weed control methods, boats, jet skis, waste water treatment plants, industrial runoff and pollution are not affecting the sub aquatic vegetation. There are no studies on this. Seems weird to me, but then these factors can't be controlled as well as the mute swans can be. One shot or hammer to the head, chuck em in a landfill and it looks like the authorities have done something.

So shall all of us that are not native to the US be forced to move back to where we came from. I am sure the Native Americans would love to see the land returned to the condition is was before we non natives decided to show up

All I can say is the years we had mute swans on Arrowhead Mountain lake in Milton Vermont we had a notable decrease in Eurasian milfoil. They controlled it much better than we were able to with skin divers and nets collecting the remanence. For me the killing of the swans resulted in a lost of water quality.