Why Are There No Birds at the Feeder? 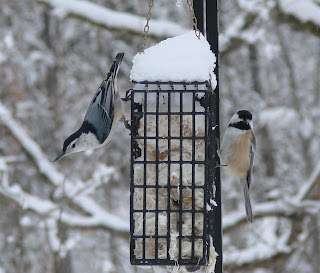 I’ve had many people ask me, “Why are there so few birds at my feeder this winter?” The short answer is, “I don’t know.”

I don’t have many birds at my feeders either. Through the Fall and early Winter, my feeders were teeming with birds. There were large flocks of finches and sparrows. Common Redpolls were a highlight of the early winter, with a flock of fifty or more feeding throughout the day. Now they are gone. What’s happened?

Before I continue, let me remind readers that I am a birding hobbyist. I am not a scientist. Early in my academic career, I was a major in science and acquired an understanding of how science does its research, weighs its evidence, tests its theory, and arrives at the “facts” based on the best evidence available at the moment. At its best, science relies on empirical data and the research of one scientist can be verified by another scientist. Conclusions are based upon research, not political positions, economic theory, or theological bias - such as those which try to influence a lot of science in our current society.

I may have begun with the study of science, but I swerved into history, and we all know how historians can interpret and reinterpret historical events. There is nothing precise about the writing of history.

I also don’t know if the lack of birds at my bird feeders is typical. There are a lot of anecdotal reports to suggest that the reality is complex. 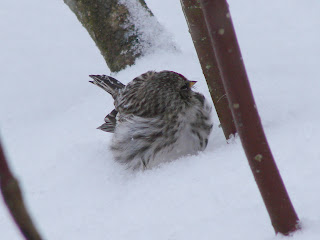 For example: Common Redpolls. I was enthralled with the flock that came to my feeders in the early winter. Then they disappeared. Since the beginning of the year, a single redpoll has come to the feeders a couple of times, spending a day or two, and then disappearing. But a friend atop Newfane Hill announced that a flock of two hundred redpolls were busy around her homestead. And a conversation about bird feeders with a Dummerston resident included many redpolls.

On the last day of the old year, I wrote about the cardinals which came daily to my feeders - Prince Cardinal with his harem of four. Soon after, they disappeared. Occasionally I would see a single male at dusk, or a single female at some other time of the day. But the tiny group was gone. Had the repeated winter storms done them in? Or had they moved southward, trying to avoid the brunt of winter? Unanswered and unanswerable questions? 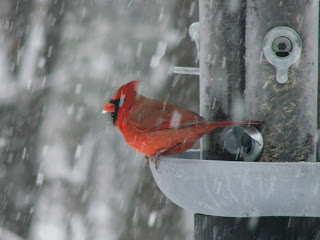 Last Sunday, cardinals were back at the feeders - Prince Cardinal and at least three females. The same ones as earlier in the winter? Probably, since cardinals are not known to migrate. If so, where have they been? There is always plenty of seed at my feeders, and we clear the snow and ice at least once a day. Had they gone to someone else’s feeders? Had they found another source of high energy food in a place more protected from the elements? I don’t know.

A similar thing happened with other wintering birds. For several weeks, I had only one or two stray chickadees and a single Downy Woodpecker; their feeder visits were brief and erratic. Then the “normal” neighborhood flock returned - several chickadees and titmice, a couple of nuthatches, a pair of Downy Woodpeckers, and a Hairy Woodpecker. In winter, these year round residents forage in mixed flocks and can be nomadic. Apparently, their nomadism has brought them back to my yard.

As many people who have queried me about the absence of birds at their feeders, just as many are unaware of any problem. They have plenty of birds at their feeders - or at least a respectable number. Sighting reports from southeastern Vermont and around the state continue to report wintering northern birds, often in substantial numbers (Pine Grosbeaks, Snow Buntings, Horned Larks, redpolls). Last week I saw a large flock of Evening Grosbeaks in Guilford getting grit and salt from the road, along with doves, robins, and juncos - none of which have been in my neighborhood for weeks.

In spite of the continuing grip of winter, some birds are already on the move. Reports of Rusty Blackbirds have come from a several places. And last Sunday, a caller reported four male Red-winged Blackbirds at her home on Upper Dummerston Road. The red-wings usually begin appearing during the first week of March.

Two weeks ago, I drove to Philadelphia. I left my home with snow squalls swirling. At the Massachusetts border, the squalls were so heavy that it was almost white-out conditions and I considered turning around. By the time I reached Holyoke, the road was dry, the sun was shining, and there wasn’t a white patch to be seen on the ground anywhere. Which leads me to theorize that many birds which we might expect to see, such as finches and some sparrows, have moved southward to where the foraging is a little easier. 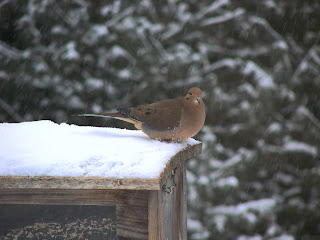 It has been a difficult winter. Even people who enjoy winter are getting tired of it. I know several families who enjoy winter sports, but they are not planning on spending the next week’s winter school break skiing or snowshoeing - they’re going to Florida. I’m tempted to make a comment about people who “wimp out,” but the truth is, I wouldn’t mind wimping out with them.

Here is a report that has surprised me. Two people have told me about having a Barred Owl at their feeders. In both case, the owl perched on or very close to the feeder. One of them was clearly observed hunting for rodents. Beneath the snow pack there is lots of life and activity. We’ll see the trails and tunnels when it finally melts. I see red squirrels diving into a hole in the snow and reemerging from another hole ten or twenty feet away. The Barred Owls, whose weak talons restrict their prey primarily to small rodents, were coming to where the mice and voles could be easily found. The owls can hear the mice active beneath the snow pack, but how do they break through the ice crust on top? One observer watched the owl as it tried to plunge through the ice crust, and even tried to scratch and break the surface.

Curiously, neither of these owls was harassed by the small birds. They were ignored. Even the Blue Jays payed no mind to the owl.

Are the numbers of birds more or less than usual this winter? I don’t know. Perhaps data from the Great Backyard Bird Count will tell us. What can be said is that winter is a time of harsh gleaning. In nature, there is no sentiment, or sentimentality, for the weak. The strong and the fit survive.

Email ThisBlogThis!Share to TwitterShare to FacebookShare to Pinterest
Posted by Chris Petrak at 9:03 AM
Labels: Winter Bird Feeders

I have read serveral accounts by folks who I suppose are "experts" that say birds really don't need feeders. That they would do just fine without them. Maybe this is true most of the time, but when the winter weather is the worst one of the few spots I find birds flocking too are feeders. So if even they don't need them it seems in the least they appreciate them. Aside from population trends my working theory on birds appearing, disappearing and reappearing is this, "Birds have wings and often use them." Thank you for the interesting post.
Vern

I recently have zero birds at my feeder and is the height of breeding season...I am at a loss as to why because besides my cardinals, nuthatches, titmice and chickadees, I also have an abundance of house finches and house sparrows that are year long residence feeders. I am stumpted. Where are they?

You have a hawk. My birds come and go all day long. If they linger too long he tries to get one. The hawk is not very successful. He has managed to get 3 Cowbirds since the fall.

I was watching a commercial related to medicament for mature men with problems of erection Generic Viagra, all of a sudden another commercial about pigeons. In my town pigeons usually line up standing on electricity cables, and you can see them along the way to the horizon awaiting for the sunset Buy Viagra Cheap Viagra.

We have two homes. One in Massachusetts and the other in New Hampshire. The feeders at our MA house are teaming with birds. All the usuals: cardinals, titmice, sparrows, purple finches, red bellied woodpeckers, etc. But our NH home is birdless. We filled the feeders a month ago and havent had to fill them again. Ive put out bread crumbs and suet and NOTHING.... Not a bluejay or a chickadee in sight. Very sad. I hope the winter hasnt been too hard for them to take. Ive heard some say hawks or owls may be scaring them or eating them but I havent heard the Bard owl or seen a hawk either. I hope they come back in the Spring. We love to watch them.

CAN YOU TELL ME IF BIRD SEED GOES BAD .WITH NO BIRDS AT THE FEEDER, IT TAKES A LONG TIME TO USE UP A LARGE BAG

I have played cat & mouse with a bold hawk (or falcon) since Oct
2011! Very cunning - no matter where I placed the feeder - she found it within minutes.Since its usually placed right outside the window I hear the flock flee only to see the predator with one of the birds in claw on the neighboring tree! I believe their nesting on roof of tall build.1/2
mile away with prime view of
feeder locations. Only three chickadees seen today - they grab
and run. A large black cloth to mimic blackbird didn't help for long. Library aide suggested not
to feed birds for at last 3 mos.
I've yelled - threw snowballs-
even enlisted the garden hose.
I miss the little brown birds-
& run from one side of the house to the other searching for that
hugh bird while the feeder is out.
Its as if they have nested on my roof!!! Better to not feed for a while!

I am in south central Pa near the Md border and now I know I am not alone. I buy premium seed and keep clean feeders. This year I even have a heated birdbath. There are a few birds but nothing like I normally had. I did have a hawk a few weeks back. I saw him take a black eyed Junco from the ice on the bath (prompting the heater purchase). That was several weeks ago so I think he is probably gone by now. They don't stay too long in one place as a rule. We had only one good snowfall so far and I had birds everywhere when the snow covered the ground, so they are here. I'll keep going and hope they come back sometime soon. Nature has her ways....even if we don't like it...she knows best. Good luck to all.

Rick, nobody cares about the issues you and your boy friend have with
with your bod parts not functioning properly, were only interested in birds so keep it to that and nothing else....