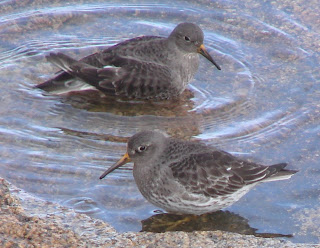 Halibut Point on Cape Ann, Massachusetts, is one of many old coastal quarries. A trail leads past the flooded quarry pit to the built up promontory. Projecting into the ocean, it is a good place to see aerial seabirds, alcids, and sea ducks during migration, or in their wintering waters. The best conditions for seeing birds is during or just after a storm with strong winds blowing toward land. Then the birds are pushed toward the shore. Those can be brutal days to be outdoors, and the accompanying weather often renders the drive from Vermont to the coast an exercise best not undertaken. The day I was there, the wind was blowing gently from the land; it had been doing so for several days. Birding in those conditions is more pleasant, but not always very productive. Birds were far distant; only a few eiders, a handful of scoters, a couple of cormorants, and a loon or two, could be seen diving in the high surf of the high tide.

I scanned the rocky coast beneath the promontory. Small birds were milling over the wet rocks, flying up as a wave was about to crash, then returning to scurry about. They were too far distant to see any field marks, but I knew they were Purple Sandpipers. Purple Sandpipers are the only shorebirds which regularly and dependably winter along the New England coast. Occasionally a few other shorebirds will stay for the winter - small groups of Sanderlings or Dunlin, usually seen on sandy shores. Last year I saw a single Red Knot on the rocks where the Purple Sandpipers were so busy. But the high likelihood is that a shorebird on a rocky New England coast in winter will be a Purple Sandpiper.

It was as pleasant a day as you could ask for on a New England coast in the middle of winter. New weather was coming in, so the sunlight was hazy, but the clouds were just beginning to form up. Wind and temperature were such that I could pull off my gloves from time to time without acquiring immediate frostbite. Nothing seriously impeded the seductive attraction which a rocky coastline holds for me.

Long ago as a very young boy, I traveled with family through New England. Most details are lost to memory, but two remain. One was rock hopping back and forth across a mountain stream. The other was scrambling over the rocky coastline at Acadia National Park, especially around the Otter Cliffs. My uncle, then in his late teens and something of a big brother to me, climbed the cliffs. I was not allowed to join him. Rocky mountain streams and rocky New England coasts have been siren songs to me ever since. 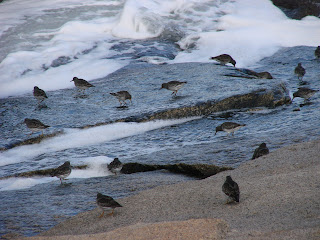 So seeing those distant Purple Sandpipers along the rocky coast around Halibut Point was a double invitation to wander down the trail and go scrambling over the rocks. Except, that the passing years have eroded some of my agility, so I do less scrambling and more careful stepping and cautious climbing.

My already slow pace slowed even more as I came closer to the Purple Sandpipers. I did not want to startle them into flight; it is so easy for skittish shorebirds to burst to the wing on just a whim. Slowly I moved to within a few yards, then leaned against a rock and watched them. Off and on during the next twenty minutes, I took one or two steps closer. Mostly I just watched the show.

Most sandpipers nest in the Arctic and travel thousands of miles to South America. By some evolutionary quirk, the Purple Sandpiper travels only a few hundred miles. It nests in the Arctic, but not as far north as some shorebirds, and winters along rocky coastlines from southern Greenland and New Brunswick to New York. Twenty years ago, I use to see Purple Sandpipers along the exposed jetties in Cape May, New Jersey, but beach restoration has nearly submerged the jetties and removed winter habitat for these birds. 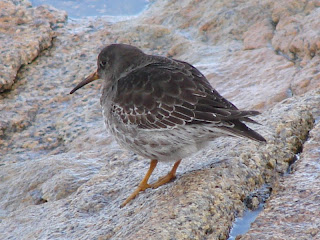 Aside from being the only sandpiper likely to be seen on a rocky New England coast in the winter, the Purple Sandpiper is characterized by its stocky build. Its short-legs are yellow; its long beak is orange at its base, becoming dark at the tip, with a tiny nob at the end. But you have to get close to see these characteristics.

More likely, you will see the Purple Sandpiper feeding on wet rocks. Its food is found on these wet rocks below the high-water level. Here is Forbush’s description from his 1925 Birds of Massachusetts: “As the tide begins to drop the birds move around restlessly, often flying from one small island to another, and as soon as the band of gray-white barnacles is exposed, feeding commences. A little later the festoons of rockweed will also be exposed with their wealth of tiny marine creatures upon which the Purple Sandpiper feeds. They seem to prefer the eastern or seaward side of the ledges except in the stormiest weather, probably because the recurring surges of the sea continually turn over the heavy fronds of seaweed, exposing fresh surfaces to the eager little birds searching for snails and other mollusks, and for minute crustaceans.” 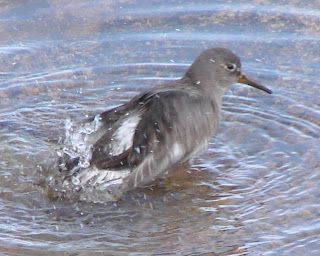 This is what I watched on the rocks at Halibut Point. The birds fluttered into the air when a wave was about to break, then returned to scurry over the damp rock, foraging for food. It was almost as though they enjoyed the sport of dancing before the waves. The surf was high on this day, the waves crashed over the rocks, but the water only just ebbed before the birds returned to the hunt. Like sportsmen and athletes, some would call a time-out, retreat to drier rocks, sometimes to refresh themselves with a quick bath in a small puddle before reentering the game.

An aside: I can understand the Purple Sandpipers cavorting before the cold surf; they have adapted to this over many generations. I cannot understand the wet-suit clad surfers I also saw around Cape Ann on this same day trying to find a good wave to ride. These (all of them) young men seem to be ignoring any evolutionary good sense their species has developed.

With the imprint of a young boy’s memory, and the lure of a common, but sometimes elusive wintering Purple Sandpiper, I went scrambling about a rocky coastline on a relatively nice winter day. What more can one ask for? An exercise in nostalgia and good birding!

Email ThisBlogThis!Share to TwitterShare to FacebookShare to Pinterest
Posted by Chris Petrak at 9:02 AM
Labels: Purple Sandpiper

Thanks for posting your interesting article about purple sandpipers. Would love to see one at the end of Oct. 2013 while on the E. Coast for a week. Nice pictures, good information. Reminds me of our rock sandpiper here in the Pacific Northwest.