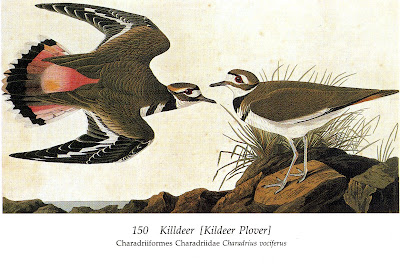 Reader, suppose yourself wandering over some extensive prairie, far beyond the western shores of the Mississippi. While your wearied limbs and drooping spirits remind you of the necessity of repose and food, you see the moon's silvery rays glitter on the dews that have already clothed the tall grass around you. Your footsteps, be they ever so light, strike the ear of the watchful Kildeer, who, with a velocity scarcely surpassed by that of any other bird, comes up, and is now passing and repassing swiftly around you. His clear notes indicate his alarm, and seem to demand why you are there. To see him is now impossible, for a cloud has shrouded the moon; but on your left and right, before and behind, his continued vociferations intimate how glad he would be to see you depart from his beloved hunting-grounds. Nay, be not surprised if he should follow you until his eyes, meeting the glaring light of a woodsman traveller, he will wheel off and bid you adieu.
from John James Audubon, The Birds of America, 1840-1844

Email ThisBlogThis!Share to TwitterShare to FacebookShare to Pinterest
Posted by Chris Petrak at 9:53 AM
Labels: killdeer