Blackbirds Are Songbirds That Can’t Sing 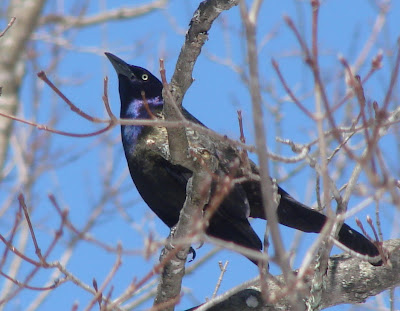 Some of the blackbirds are among the earliest songbirds to return to our Vermont neighborhoods. The blackbirds which return early are members of the blackbird family (Icteridae), and they are mostly black: Red-winged Blackbird, Common Grackle, Brown-headed Cowbird, and the uncommon, bog-loving Rusty Blackbird. Other black birds, such as starlings, crows, and ravens, are not blackbirds (Icteridae). They belong to the same Order (Passeri - songbirds), but different families.

So ... not all black birds are blackbirds, and not all blackbirds are black. The Icteridae family includes meadowlarks, bobolinks, and orioles. These blackbird family members are among the most beautiful summer birds with some of the sweetest songs, songs that send a shiver through the body. Baltimore Orioles, brilliant orange and black, sing from tree tops. In pastures and grasslands, the Bobolink’s bubbly whistles carry over the fields, perhaps joined by the (now rare in Vermont) Eastern Meadowlark’s “spring-of-the-year.”

But these colorful blackbird songsters will not return for several weeks yet. The blackbirds which have returned are the black birds.

And yes, I have started out by having some deliberate fun with common names. Common names are often confusing because they are more likely to be descriptive than to explain relationships. Just to throw one more piece into the confusing stew, in Europe there is the Common Blackbird; its profile and structure makes it look like a black robin. That is what it is; in Europe the blackbird is a thrush like our robin.

The blackbird family (Icteridae) is found only in the Americas. Many of them are black, and those black blackbirds are among the first songbirds to return in the Spring - the red-wings, cowbirds, and grackles. Birders welcome them because they are the promise of Spring, the vanguard of what is soon to come. After our long winter months in Vermont, they finally give us something new to look at and listen to.

I have been watching these blackbirds at my feeders. They are wary and skittish. The slightest inside movement sends them flying off. When I walk outside, I see their dark silhouettes high in the bare branches. They are beginning their courtship, and singing - if you can call it that.

Consider, for example, the Common Grackle: I suppose the song of the grackle is exciting to the females he is courting, and it may even be intimidating or threatening to another, less adept, male grackle. They get plenty of practice; they are singing constantly, always with enthusiasm and energy. But don’t expect the Common Grackle to appear on any list of Grammy nominated musicians; their songs are anything but harmonious (which would not necessarily exclude them from the Grammys), and often sound like a stack of discordant noise in an otherwise bucolic setting. Pete Dunne has described their vocalizations as “Noisy! Song is loud and harsh - a gutteral protest followed by a breathy, strangled screech.”

Massachusetts ornithologist Edward Forbush described Common Grackle’s song this way: “The outpourings of a flock of these birds have been likened to a ‘wheelbarrow chorus,’ but the sound might be better represented by a number of iron gates swinging, creaking and clanging on rusty un-oiled hinges.”

Forbush continues: “That this vocal performance should be classed as a song from a scientific point of view there is no doubt, but such it would not seem to the ordinary observer. It is harsh and disagreeable, a squeaking, saw-filling explosion of notes. It varies considerably and sometimes suggests the sound of a jet of escaping steam. I have written it down ‘er wheet, dam that,’ but my interpretation may have been influenced by my mental attitude induced by the performance.” 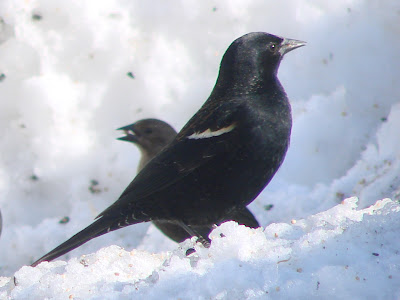 The Red-winged Blackbird and the Brown-headed Cowbird aren’t much better at singing than the Common Grackle, but they have not been subjected to the derisive descriptions that their cousin endures. Dunne, for example, describes the male red-wing’s classic song as “a loud musically gurgled ‘tur-a-leeee.’” Kaufman calls the song a “nasal gurgling ending in rough trill.” And Forbush, noting that the Red-wing loves the marsh and waterside, describes its notes as carrying “a suggestion of boggy ooze, and that its “chuck” is frog-like. The classic mnemonic for the Red-winged Blackbird is “conk-a-reee;” the extended long “e” in the mnemonic has a musical tone that I have never seen applied to any vocalization of the Common Grackle.

Likewise, the Brown-headed Cowbird seems to have been overlooked by the music critics, although its lack of singing ability is about the only thing that critics have overlooked. This is a bird that bird lovers love to hate. It is a brood parasite; the female drops her eggs in the nests of other songbirds, usually smaller ones, and leaves all incubating and raising to the host birds. Cowbird parasitism is a significant problem for many of our favorite songbirds. In addition, the cowbird is ugly: the male all black with a dark brown head - the female a dirty gray brown. 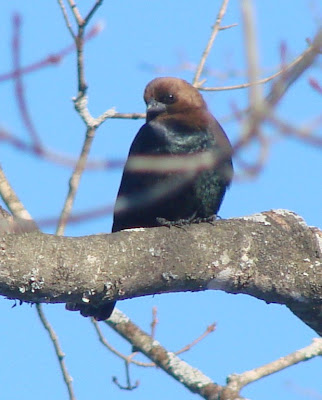 The blackbirds (the black ones) are songbirds by taxonomic classification, not by their vocal abilities. Nevertheless, I welcome their songs, such as they are. In March when winter is releasing its grip with great reluctance, they bring a sound that is filled with enthusiasm, energy, and hope. Our three common blackbirds (I could do with the cowbird being less common) are the vanguard of a great wave that is moving northward, carried on nature’s irrepressible impulse for life. The blackbirds are decked out in fresh, iridescent plumage. They are active and energetic. Noisy and gregarious. The very things we need to awaken us after our semi-hibernation and winter dormancy.

Like the squeaking of an oil-less wheelbarrow, the grackles are singing. I hear them through the storm windows. Outside I see them in the tree tops. The noisy songs speak of Spring and the thought of Spring makes me wonder what other signs there might be. So I wade through the softening snow pack. Beneath a tree where the ground is bare, tiger lilies are beginning to emerge. In the southern corner by the chimney, crocus are growing, beginning to bud.

To my friend in the tree top I say, “You’re right - Spring is near.” The grackle’s un-oiled wheelbarrow creaks loudly. It is one of nature’s sounds welcome sounds. Good birding!

Email ThisBlogThis!Share to TwitterShare to FacebookShare to Pinterest
Posted by Chris Petrak at 6:51 AM